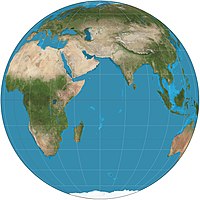 Every point on Earth has a location. Location can be described in two different ways:

Every site on Earth has a unique absolute location, which can be identified with a reference grid (such as latitude and longitude). Maps and globes can be used to find location and can also be used to convey other types of geographical information. Map projections are used to represent the three-dimensional Earth on a two-dimensional map. The earth's position relative to the sun affects climate, seasons, and time zones. [1]

Sub-themes include "the earth as an environmental system" (including the role and problems of technology, environmental hazards and limits, and adaptation) and "ethics and values" (differing cultural values and the trade-off between economic development and environmental protection). [1]

Movement is the travel of people, goods, and ideas from one location to another. Examples of movement include the United States' westward expansion, the Information Revolution, and immigration. New devices such as the airplane and the Internet allow physical and ideological goods to be transferred long distances in short time intervals. A person's travel from place to place, and the actions they perform there are also considered movement.

Places are connected by movement: [1]

Regions may have clear, well-defined borders or vague boundaries. [1]

The five themes of geography were published in the 1984 Guidelines for Geographic Education: Elementary and Secondary Schools by the National Council for Geographic Education/ Association of American Geographers Joint Committee on Geographic Education. [1] The committee included Salvatore J. Natoli, Richard G. Boehm, James B. Kracht, David A. Lanegran, Janice J. Monk, and Robert W. Morrill. [2] The themes were not a "new geography" but rather a conceptual structure for organizing information about geography. [1]

The themes became widespread in American social science education and were used for teacher training by the National Geographic Society's statewide alliances. They also played a role in reestablishing geography in school curricula. [1]

In 1992, a National Assessment of Educational Progress consensus group said that the five themes are useful for teaching, but that for assessment, geography should be divided into the three topics of "space and place", "environment and society", and "spatial dynamic and connections". [1]

The five themes continue to be used as an educational approach in many educational outlets. [3] As of 2012, they are included in the National Council for the Social Studies elementary school standards and in state social studies standards. [6]