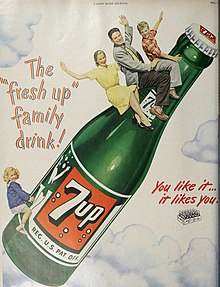 Since the industrial revolution, the portrayal of family in advertising has become a prominent advertising practice, and is utilized in marketing campaigns to increase profits. While some sociologists argue that these advertisements can influence behavior and attitudes within society, others argue that portrayals of families in advertising have a much greater impact and therefore hold historical significance to cultural evolution. This is generally believed because advertisers tend to only portray family members in traditional and socially acceptable roles that are representative of the period in which the advertisements are presented.

The family symbol in advertising may be observable before the industrial revolution, but it was not until after the industrial revolution that advertising boomed and the use of family images in advertising became prevalent. [1] [2] The industrial revolution changed advertising from informative flyers marking the availability of goods in 17th and 18th century Europe, whose audience was those within physical propinquity, to multimillion-dollar campaigns that attempted to instantly connect and persuade peoples from across the world. [3] [4] After the industrial revolution, large companies emerged as mass-producers, products became branded, and customers began establishing brand loyalties. [3] [5] Thus, persuading customers to purchase one brand rather than another became vital to advertising. An advertisement was responsible for making products and services salient to earn consumer attention in competitive industrial markets. During this period, not only did the immensity of the advertising industry drastically change but so did its marketing strategies as it began to incorporate images and specify an audience. This change from largely informative to largely persuasive strategies and from general to specific audiences explains the increase in presence and usage of symbols, representations, and stereotypes in advertising—including those of the family.

Different societies and cultures have used family symbols in advertising to varying extents of success. Because family life stresses in-group benefits, preferences, and successes over those of the individual, collectivist societies tend to use more family symbols in advertising than individualist societies. [6] For example, Korea, which is reputably collectivistic, has more success with family advertisements than the United States, which is reputably individualistic. [6]

The modern post-industrial era in advertising was one of reaffirming widely held social values, such as heterosexuality and the middle-class while neglecting alternative values or lifestyles. The advertising industry was conservative and did not deviate from socially acceptable images. Some countries, such as Japan, continue to present the family stereotypically, especially in their television advertisements. [7] In the past decade, however, many advertising agencies have begun to more accurately capture reality and the diversity of lifestyles and family types of consumers. [8] 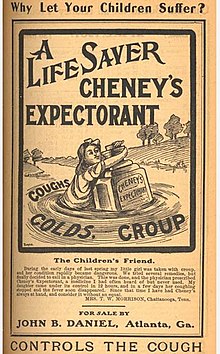 An advertisement for Cheney's Expectorant, 1906, asking the consumer "Why Let Your Children Suffer?"

' Family' is a popular symbol in commercial advertising that is commonly used to persuade audiences into consuming one's business' goods or services over competitors. Consequently, the symbol of the family as used in advertisements is functional – it both increases profit and builds a positive reputation among customers. [9]

The family symbol functions on three levels of persuasion: social, psychological, and personal. [10]

One does not only feel a social or external pressure to fulfill roles and expectations of being a good parent, sibling, or child, however. There is a distinctly emotional and internal pressure to be ‘good’ due to psychological attachments in spousal, sibling, and/or parent-children's relationships. Psychological persuasion in advertisements appeals to one's motives, attitudes, and personalities. [10] The family symbol is psychologically persuasive in that it appeals to the emotional attachments between spouses, siblings, or parent-child relationships. To continue the above example, the mother not only wants to purchase a product that purportedly limits irritation or harm for her child due to her social role and expectations but also because she feels an emotional attachment to her child. The attempt to activate the emotions of audiences and to psychologically persuade is popular among advertisements. [3] Family affects us significantly on this psychological level – the level at which advertisements are most effective. [9]

Personal persuasion appeals to one's demographic identity or consumer behaviors. The family symbol is personally persuasive because families make buying decisions together as a unit. Furthermore, one person in a family may make the majority of the buying decisions. [10] To target that person in advertising, referencing their location within the family and their responsibility to make purchasing decisions for the family, will be more profitable than targeting others. For an example of personal persuasion, the McDonald's corporation in India has had great marketing success in designating themselves as the "McDonald's Family Restaurant". [11]

Advertisements are used to attract customers to a business's products or services. In doing so, they are also making statements regarding race, social class, gender, values, and family. [3] [8] They not only describe these social categories, but they also prescribe behaviors or show one how it is that they should act in accordance with social ideals or norms. [3] According to Belk and Pollay, “not only do [advertisements] show us the ideal life, they instruct us [on] how to live.” [12] Through targeting specific groups of people for products and services, advertisements both reflect changes in social norms and are changes in social norms regarding acceptable behavior. Some argue that the image of a family only plays a symbolic role by reflecting the current cultural values. [8] Advertisements may not only reflect changes in social norms, but also be asserting that such behavior is acceptable. As a result, sociologists have challenged the public to study ads containing images of the family not just as marketing messages but also as vehicles for behavior and attitudes towards society. [13]

Advertisements, specifically ones that show the family, commentate on the transition from modernity to postmodernity. [14] This transition is the transition of middle class nuclear families where heterosexuality is the norm to the recognition and acceptance of a variety of different family types, an embracing of societal polysexuality and plurality; it is furthermore the transition from mass culture to the prevalence of sub-cultures and multiculturalism. [14] Literary critic Fredric Jameson says that "our advertising...is fed by postmodernism in all the arts, and is inconceivable without it." [14]

A German advertisement for Hacavon, 1920

Throughout history, mothers have been portrayed as the primary physical caregivers of children. Physical caregiving includes tasks such as breastfeeding and changing diapers. [15] Some theorize that this has to do with the idea of women as having a natural instinct towards motherhood. [15] Fathers, on the other hand, have been more likely to be portrayed in play activities with their children and are often more likely to be shown interacting with sons than daughters. [15]

Much like fathers are depicted primarily in recreational activities with their children, other male members of the family, including sons and male grandchildren, are portrayed in play activities the majority of the time. [16] Young female members of the family are depicted similarly in play activities, nevertheless, tend to be more likely shown in activities related to chores and child-care. [16] In addition, the image of the grandparent has been largely nonexistent in advertising. [16]

It is important to also note that images of the family depend upon the specific source in which the image is found and the type of audience that the source aims to reach. [17] For example, in a women's magazine such as Good Housekeeping, one can expect to find women in the family portrayed solely as domestic housewives. [18]

Just as the image of the wife in advertising has reflected the general views of the appropriate roles of a wife, images of the husband also reflect the cultural values surrounding what role was believed a husband should be engaged in. [19] For example, over time, it is common to find images of the husband performing work outside of the home and taking care of the family finances. [19] It has been noted that this role has been especially prevalent during 1920, 1936, and 1970. [19] On the other hand, one is not likely to find an advertisement depicting husbands engaged in household chores, except when they are depicted as particularly bad at performing the housework. [20] In addition, it has been noted that over time, the portrayal of husbands and wives in an intimate, romantic relationship has been on the rise. [19]

In general, advertisements tend to reflect the popular attitudes surrounding the appropriate gender roles of the time. For example, in the 1920s, when such a tiny proportion of wives were working for economic gain outside of their homes, [21] it was rare to see wives portrayed within advertising in a role in which they were working for monetary gain. Instead, women were primarily portrayed doing household tasks. The exceptions to this rule came about in times of economic hardship when wives were thrown into the labor force to ensure a families’ economic survival. One of these times was the Great Depression during the 1930s. [22] Since then, as housekeeping becomes less and less important of a family role, [23] the number of advertisements portraying women solely as performing household tasks has been on the decline.