From Wikipedia
https://en.wikipedia.org/wiki/Eyre_Peninsula
This article is about the peninsula in South Australia. For other uses, see Eyre Peninsula.
South Australia

The Eyre Peninsula is a triangular peninsula in South Australia. It is bounded on the east by Spencer Gulf, the west by the Great Australian Bight, and the north by the Gawler Ranges.

Originally called Eyre’s Peninsula, [8] it was named after explorer Edward John Eyre, who explored parts of the peninsula in 1839–41. The coastline was first charted by the expeditions of Matthew Flinders in 1801–02 and French explorer Nicolas Baudin around the same time. Flinders also named the nearby Yorke’s Peninsula and Spencer’s Gulph on the same voyage.

The peninsula's economy is primarily agricultural, with growing aquaculture, mining and tourism sectors. The main townships are Port Lincoln in the south, Whyalla and Port Augusta in the north east, and Ceduna in the northwest. Port Lincoln (Galinyala in Barngarla), Whyalla and Port Augusta (Goordnada) are part of the Barngarla Aboriginal country. [9]: 230  Ceduna is within the Wirangu country.

The peninsula was named after explorer Edward John Eyre on 7 November 1839 by George Gawler, second Governor of South Australia. [10]

The peninsula's coastline boundary was defined in 1839 as “Spencer's Gulf in its whole length, to the southern ocean from Cape Catastrophe to the western point of Denial Bay.” Its northern boundary was described in 1978 as follows: “no official boundary [has] ever [been] proclaimed but the common sense choice would be to draw a straight line from Yorkey Crossing to the northernmost point of Denial Bay.’’ [7] 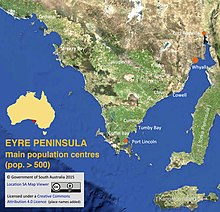 The major industry is farming — cereal crops, sheep, and cattle in the drier north and more water-intensive activities such as dairy farming and a growing wine industry in the south. Many coastal towns have commercial fishing fleets, the largest being located at Port Lincoln. The town has previously harbored a large tuna-fishing fleet, which is gradually transforming its practice to fish farming with the growth of sea cage aquaculture. Oyster farming was established in the 1980s and occurs in several sheltered bays including Franklin Harbour (near Cowell in Spencer Gulf) and Smoky Bay off the west coast.

Iron ore is mined by Arrium in the Middleback Range near Iron Knob, inland from Whyalla. Some of the product is smelted to produce feedstock for the Whyalla Steelworks. Increasing volumes of iron ore are also being exported from Whyalla directly to customers in Asia. 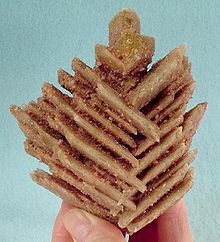 There is a commercial nephrite jade mine near Cowell, and jade souvenirs can be purchased in the town.

The peninsula has many small inactive mines and quarries, and is considered prospective for a variety of minerals, including graphite, coal and uranium with many deposits being proven in recent years. 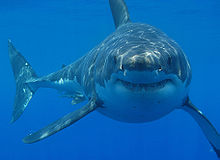 Tourists can cage-dive with great white sharks off Eyre Peninsula.

The Eyre Peninsula is promoted by Regional Development Australia Whyalla and Eyre Peninsula as the 'Seafood Frontier' due to the variety of seafood species found in the region, both farmed and wild-caught. Key species are the southern bluefin tuna and yellowtail kingfish, which are farmed in Port Lincoln and Arno Bay, and Pacific oysters, which are grown in Coffin Bay, Cowell, Denial Bay, Smoky Bay and Streaky Bay. Other seafood offerings include abalone, King George whiting, mussels, western king prawns and blue swimmer crabs.

Ecotourism operators offer visitors opportunities to experience many of the peninsula's iconic marine species either in or on the water.

From Whyalla, visitors can snorkel or dive off Point Lowly to witness the mass breeding aggregation of giant Australian cuttlefish which occurs there from May to August each year.

From Port Lincoln, tourists can swim in a cage with southern bluefin tuna, with a colony of Australian sea lions, or enter a shark cage to observe great white sharks offshore near the Neptune Islands.

Ceduna lies to the east of the Nullarbor Plain, which is crossed by a stretch of the Eyre Highway running parallel to the Great Australian Bight. Oyster farm tours can be experienced at Smoky Bay allowing visitors to see where oysters are grown. Recreational fishing for species such as King George whiting and blue swimmer crabs does not require a licence, although size, bag, and boat limits may apply. [11]

On the west coast, tourists can snorkel with Australian sea lions and bottlenose dolphins in the sheltered waters of Baird Bay, and observe southern right whales (and occasionally humpback whales) from the shore or by boat from Fowler's Bay from May to October.

Artefacts from the Peninsula's pioneer and, to a lesser extent, indigenous heritage can be seen at a network of museums operated by the National Trust of South Australia, which include the Mount Laura Homestead Museum in Whyalla, the Tumby Bay National Trust Museum and the Koppio Smithy Museum. The Whyalla Maritime Museum has a nautical theme which commemorates the former Whyalla shipyards. Its displays include the World War II corvette HMAS Whyalla, which sits in dry-dock and is visible from the Lincoln Highway.

The peninsula is served by the isolated Eyre Peninsula Railway. Peaking at 777 kilometres in 1950 radiating out from the ports at Port Lincoln and Thevenard, today only one 60 kilometre section remains open. It is operated by One Rail Australia. It has always been isolated from the main network. A proposal to link it with the rest of the network at Port Augusta was rejected in the 1920s [13] [14] and again in the 1950s. [15] [16]

The BHP Whyalla Tramway operated from the iron ore mines in the Middleback Ranges to the smelter and port at Whyalla. These are also connected to the national rail network by the Whyalla railway line to Port Augusta.

To facilitate prospective mines, new freight corridors and ports have been proposed to export minerals via Spencer Gulf. New port proposals are in place at Port Bonython, Lucky Bay, Cape Hardy and Sheep Hill ( Lipson Cove). A proposal to export iron ore from Port Lincoln by Centrex Metals was approved but abandoned after strong public opposition. [18] Port Bonython Fuels, a future fuel distribution hub has been approved to be constructed at Port Bonython to aid the development of the mining industry. Once constructed and operational, fuel will be delivered to towns and mine sites by road tankers up to A-triple class.[ citation needed]

A ferry used to link the Eyre Peninsula and Yorke Peninsula for years.[ when?] There is nothing there at the moment. [19]

Potable water is scarce on the peninsula. Presently, water is pumped several hundred kilometres from the Murray River to the town of Whyalla through the Morgan-Whyalla pipeline. Underground water resources are suffering from gradually increasing salinity. The only reliable surface flows are from the Tod River and its main tributary, Pillaworta Creek, which are captured by the Tod Reservoir. The reservoir was built to augment the groundwater supply of Port Lincoln and was constructed in the early 1920s. It was taken offline in the early 2000s due to concerns over rising salinity and contamination from agricultural chemicals. SA Water has investigated potential locations for seawater desalination plants to address future water security problems. As of January 2014, no plants are proposed to be built for domestic or agricultural supply, though one currently exists and two have been proposed to serve the mining industry exclusively. The existing plant is located at Whyalla and is operated by Arrium and plants are proposed for Point Lowly and Lipson Cove to serve BHP and Centrex Metals respectively.

The peninsula includes the local government areas of Ceduna, Cleve, Elliston, Franklin Harbour, Kimba, Lower Eyre Peninsula, Port Lincoln, Streaky Bay, Tumby Bay, Wudinna and Whyalla, as well as the western portion of the City of Port Augusta. [20] [2] The area at the northern end of the peninsula is within the Pastoral Unincorporated Area of South Australia where municipal services are provided by the Outback Communities Authority to communities, including Iron Knob. [2] [21]

The peninsula is within the boundaries of the federal division of Grey and the state electoral districts of Flinders and Giles. [6] [4] [5]

The peninsula is within the extent of the following two South Australian government regions - the Eyre Western and the Far North. [2] [3] 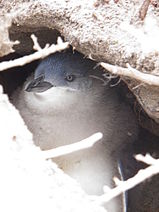 As at 2016, the following protected areas were located within the peninsula: [22]

The peninsula coastline is littered with shipwrecks from the 19th and 20th centuries. [23] 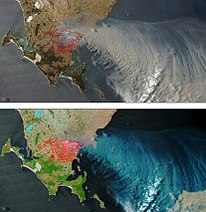 Bushfires on southern Eyre Peninsula in 2005

In the 1920s, seven people were killed during the construction of the Tod Reservoir, north of Port Lincoln. [24] [25]

In January 2005, nine people were killed in the major Eyre Peninsula Bushfire. [26]