Eurasia ( /jʊəˈreɪʒə/) is the largest continental area on Earth, comprising all of Europe and Asia. [3] [4] Primarily in the Northern and Eastern Hemispheres, it spans from the British Isles and the Iberian Peninsula in the west to the Japanese archipelago in the east. The continental landmass is bordered by the Atlantic Ocean and Africa to the west, the Pacific Ocean to the east, the Arctic Ocean to the north, and by Africa, the Mediterranean Sea, and the Indian Ocean to the south. [5] The division between Europe and Asia as two continents is a historical social construct, as they have no clear physical separation between them; thus, in some parts of the world, Eurasia is recognized as the largest of the six, five, or four continents on Earth. [4] In geology, Eurasia is often considered as a single rigid megablock. However, the rigidity of Eurasia is debated based on paleomagnetic data. [6] [7]

Eurasia covers around 55,000,000 square kilometres (21,000,000 sq mi), or around 36.2% of the Earth's total land area; and is home to the largest country in the world, Russia. The landmass contains well over 5 billion people, equating to approximately 70% of the human population. Humans first settled in Eurasia between 60,000 and 125,000 years ago. Some major islands, including Great Britain, Iceland, Ireland, and Sri Lanka, as well as those of Japan, the Philippines, and most of Indonesia, are often included in the popular definition of Eurasia, despite being separate from the contiguous landmass.

Physiographically, Eurasia is a single continent. [4] The concepts of Europe and Asia as distinct continents date back to antiquity, and their borders are geologically arbitrary. In ancient times the Black Sea and the Sea of Marmara, along with their associated straits, were seen as separating the continents, but today the Ural and Caucasus ranges are more seen as the main delimiters between the two. Eurasia is connected to Africa at the Suez Canal, and Eurasia is sometimes combined with Africa to make the largest contiguous landmass on Earth called Afro-Eurasia. [8] Due to the vast landmass and differences in latitude, Eurasia exhibits all types of climate under the Köppen classification, including the harshest types of hot and cold temperatures, high and low precipitation and various types of ecosystems. 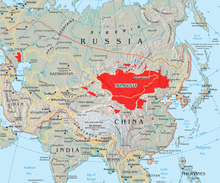 The boundary of the 13th century Mongol Empire and location of today's Mongols in modern Mongolia, Russia and China.

Eurasia formed between 375 and 325 million years ago with the merging of Siberia, Kazakhstania, and Baltica, which was joined to Laurentia, now North America, to form Euramerica. Chinese cratons collided with Siberia's southern coast.

Eurasia has been the host of many ancient civilizations, including those based in Mesopotamia, the Indus Valley and China. In the Axial Age (mid- first millennium BC), a continuous belt of civilizations stretched through the Eurasian subtropical zone from the Atlantic to the Pacific. This belt became the mainstream of world history for two millennia.

Originally, “Eurasia” is a geographical notion: in this sense, it is simply the biggest continent; the combined landmass of Europe and Asia. However, geopolitically, the word has several meanings, reflecting specific geopolitical interests. [9] “Eurasia” is one of the most important geopolitical concepts and it figures prominently in the commentaries on the ideas of Halford Mackinder. As Zbigniew Brzezinski observed on Eurasia:

“... how America "manages" Eurasia is critical. A power that dominates “Eurasia” would control two of the world’s three most advanced and economically productive regions. A mere glance at the map also suggests that control over “Eurasia” would almost automatically entail Africa’s subordination, rendering the Western Hemisphere and Oceania geopolitically peripheral to the world’s central continent. About 75 per cent of the world’s people live in “Eurasia”, and most of the world’s physical wealth is there as well, both in its enterprises and underneath its soil. “Eurasia” accounts for about three-fourths of the world’s known energy resources.” [10]

The Russian " Eurasianism" corresponded initially more or less to the land area of Imperial Russia in 1914, including parts of Eastern Europe. [11] One of Russia's main geopolitical interests lies in ever closer integration with those countries that it considers part of “Eurasia.” [12] This concept is further integrated with communist eschatology by author Alexander Dugin as the guiding principle of "self-sufficiency of a large space" during expansion. [13]

The term Eurasia gained geopolitical reputation as one of the three superstates in 1984, [14] George Orwell's [15] novel where constant surveillance and propaganda are strategic elements (introduced as reflexive antagonists) of the heterogeneous dispositif such metapolitical constructs use to control and exercise power. [16]

Across Eurasia, several single markets have emerged including the Eurasian Economic Space, European Single Market, ASEAN Economic Community and the Gulf Cooperation Council. There are also several international organizations and initiatives which seek to promote integration throughout Eurasia, including: 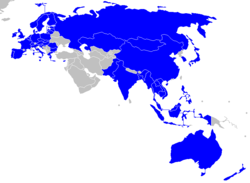 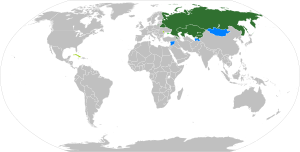 Area from Lisbon to Vladivostok with all European and CIS countries

History of the Europe–Asia division 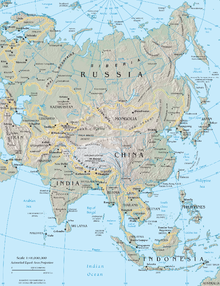 In ancient times, the Greeks classified Europe (derived from the mythological Phoenician princess Europa) and Asia (derived from Asia, a woman in Greek mythology) as separate "lands". Where to draw the dividing line between the two regions is still a matter of discussion. Especially whether the Kuma-Manych Depression or the Caucasus Mountains form the southeast boundary is disputed, since Mount Elbrus would be part of Europe in the latter case, making it (and not Mont Blanc) Europe's highest mountain. Most accepted is probably the boundary as defined by Philip Johan von Strahlenberg in the 18th century. He defined the dividing line along the Aegean Sea, Dardanelles, Sea of Marmara, Bosporus, Black Sea, Kuma–Manych Depression, Caspian Sea, Ural River, and the Ural Mountains.

In modern usage, the term "Eurasian" is a demonym usually meaning "of or relating to Eurasia" or "a native or inhabitant of Eurasia". [17] It is also used to describe people of combined "Asian" and "European" descent.

Located primarily in the eastern and northern hemispheres, Eurasia is considered a supercontinent, part of the supercontinent of Afro-Eurasia or simply a continent in its own right. [18] In plate tectonics, the Eurasian Plate includes Europe and most of Asia but not the Indian subcontinent, the Arabian Peninsula or the area of the Russian Far East east of the Chersky Range.

From the point of view of history and culture, Eurasia can be loosely subdivided into Western and Eastern Eurasia. [19] 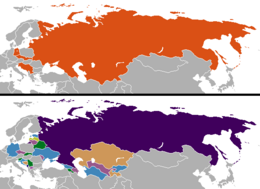 Changes in national boundaries after the collapse of the Eastern Bloc

Nineteenth-century Russian philosopher Nikolai Danilevsky defined Eurasia as an entity separate from Europe and Asia, bounded by the Himalayas, the Caucasus, the Alps, the Arctic, the Pacific, the Atlantic, the Mediterranean, the Black Sea and the Caspian Sea, a definition that has been influential in Russia and other parts of the former Soviet Union. [20] Nowadays, partly inspired by this usage, the term Eurasia is sometimes used to refer to the post-Soviet space – in particular Russia, the Central Asian republics, and the Transcaucasus republics – and sometimes also adjacent regions such as Turkey and Mongolia.