From Wikipedia
https://en.wikipedia.org/wiki/Eshmunazar_II
For the sarcophagus, see Eshmunazar II sarcophagus.

Eshmunazar II ( Phoenician: 𐤀𐤔𐤌𐤍𐤏𐤆𐤓 ʾšmnʿzr, a theophoric name meaning ' Eshmun helps') was the Phoenician King of Sidon ( r. c. 539 – c. 525 BC). He was the grandson of king Eshmunazar I, and a vassal king of the Achaemenid Empire. He reigned after his father Tabnit I on the throne of Sidon, he died at the premature age of 14, and was succeeded by his cousin Bodashtart. The king is known from his sarcophagus, decorated with two inscriptions in the Phoenician script. It is housed in the Louvre Museum.

The absolute chronology of the Kings of Sidon from the dynasty of Eshmunazar I has been much discussed in the literature; traditionally placed in the course of the fifth century, inscriptions of this dynasty have been dated back to an earlier period on the basis of numismatic, historical and archaeological evidence. The most complete work addressing the dates of the reigns of these Sidonian kings is by the French historian Josette Elayi who shifted away from the use of biblical chronology. Elayi used all the available documentation of the time and included inscribed Tyrian seals and stamps excavated by the Lebanese archaeologist Maurice Chehab in 1972 from Jal el-Bahr, a neighborhood in the north of Tyre, [20] [21] [22] [23] [24] Phoenician inscriptions discovered by the French archaeologist Maurice Dunand in Sidon in 1965, [25] and the systematic study of Sidonian coins which were the first coins to bear minting dates in antiquity based on the years of reign of the Sidonian kings. [26] [27] Elayi placed the reigns of the descendants of Eshmunazar I between the middle and the end of the sixth century; according to her work Eshmunazar II reigned from c.539 BC until his premature death c.525 BC. [28] [29] 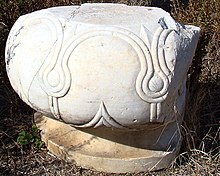 Torus-like column elements in situ at the Temple of Eshmun archaeological site.

Sidon, which was a flourishing and independent Phoenician city-state, came under Mesopotamian occupation in the ninth century BC. The Assyrian king Ashurnasirpal II (883–859 BC) conquered the Lebanon mountain range and its coastal cities including Sidon. [30]

In 705, the Sidonian king Luli joined forces with the Egyptians and Judah in an unsuccessful rebellion against Assyrian rule, [31] [32] but was forced to flee to Kition with the arrival of the Assyrian army headed by Sennacherib. Sennacherib instated Ittobaal on the throne of Sidon and reimposed the annual tribute. [33] When Abdi-Milkutti ascended to Sidon's throne in 680 BC, he also rebelled against the Assyrians. In response, the Assyrian king Esarhaddon captured and beheaded Abdi-Milkutti in 677 BC after a three-year siege; Sidon was stripped of its territory, which was awarded to Baal I, the king of rival Tyre and loyal vassal to Esarhaddon. [34]

Sidon returned to its former prosperity while Tyre was besieged for 13 years (586–573 BC) by the Chaldean king Nebuchadnezzar II. [35] After the Achaemenid conquest in 529 BC Phoenicia was divided into four vassal kingdoms: Sidon, Tyre, Byblos and Arwad. [36] Eshmunazar I, a priest of Astarte and the founder of his namesake dynasty became king around the time of the Achaemenid conquest of the Levant. [37] During the first phase of Achaemenid rule Sidon flourished and reclaimed its former standing as Phoenicia's chief city, and the Sidonian kings began an extensive program of mass-scale construction projects attested in the Eshmunazar II sarcophagus and Bodashtart inscriptions. [37] [38] [39]

To date, all that we know of the king's reign has been learned from his funerary inscriptions.

Throne of Astarte at the Temple of Eshmun in Bustan-el-Sheikh in the vicinity of Sidon, Lebanon. The temple by the Ydll source is mentioned in line 17 of the inscription of the sarcophagus of Eshmunazar II.

The kings of Sidon held priestly in addition to military, judiciary and diplomacy responsibilities. Among the Sidonian kings' various duties, priestly functions were given more importance as is highlighted by the place of the priestly title which preceded the royal title, and the patronym in the royal inscriptions of Eshmunazar I and Tabnit. The reverse of some of the locally minted coins show that the Sidonian kings were personally engaged in religious ceremonies. [40] [41]

The Phoenician cities of the eastern coast of the Mediterranean consisted of an urban area, an agricultural territory in the perimeter of the urban center, and mountainous hinterlands. [46] The agricultural territory of the Phoenician cities was intended originally to support the needs citizens; in the Neo-Assyrian era, an inscription from King Esarhaddon describing the city of Sidon listed the various localities, pastures, and irrigated land of the city's agricultural territory. The resources of this territory were no longer sufficient during the Persian domination to meet the needs of Sidon who sought territorial expansion. [47] In recognition to Sidon's naval warfare contributions, the "Lord of Kings" awarded Eshmunazar II the territories of Dor, Joppa and the lands of Dagon which are in the plain of Sharon (lines 18–20 of the Eshmunazar II sarchophagus inscriptions). [48]

The territories of the Phoenician cities could be discontinuous: thus, the lands and the cities of Dor and Joppa belonging to the Sidonians were separated from Sidon by the city of Tyre. [47]

Semitic royal titles of Phoenician regents reveal that Phoenician royalty was hereditary and that monarchs reigned for life. The responsibilities and power of the position were passed down to the regent's child or another member of their family when they die. The royal ancestry and lineage of Sidonian kings was documented up to the second or third-degree ancestor (see line 13 and 14 of Eshmunazar II's sarcophagus inscription); it was not necessarily done by order of primogeniture as is the case of Eshmunazar II's cousin and successor Bodashtart. [49] Queen mothers held political power and exercised in the form of association with political acts and co-regency. [50]

The sarcophagus of Eshmunazar II was discovered on 19 January 1855 when treasure-hunters were digging in the grounds of an ancient cemetery in the plains south of the city of Sidon. It was found just outside of a hollowed-out rocky mound that's locally known as Magharet Abloun [The Cavern of Apollo], a part of a large complex of Achaemenid era necropoli. [54] [55] [56] [57] [58] The discovery is attributed to Alphonse Durighello, an agent of the French consulate in Sidon, who informed and sold the sarcophagus to the chancellor of the French consulate in Beirut and amateur archaeologist Antoine-Aimé Peretié. [59] [60] The Egyptian-style black amphibolite anthropoid sarcophagus was first described, and the acquired by Honoré Théodoric d'Albert de Luynes, a French aristocrat and holder of an immense fortune; de Luynes who donated it to the French state. [55] [56] [60] [61] The sarcophagus of Eshmunazar II dates back to the 26th dynasty of Egypt (664–525 B.C.); it was originally made for the burial an unidentified Egyptian notable. Elayi posits that the sarcophagi were brought to Sidon before 525 BC and that they were seized by the Sidonians during their participation in Cambyses II's conquest of Egypt in 525 B.C. [62] [63] [64] The sarcophagus of King Eshmunazar II is housed in the Louvre's Near Eastern antiquities section in room 311 of the Sully wing. It was given the museum identification number of AO 4806. [57]

1892 picture of the sarcophagus lid.

1892 picture of the sarcophagus with the trough inscription visible under the lid.

The inscriptions of the sarcophagus of Eshmunazar are known to scholars as KAI 14; they are written in the Phoenician Canaanite language, in the Phoenician alphabet. They identify the king buried inside, tell of his lineage and temple construction feats and warns against disturbing him in his repose. [39]

The inscriptions also state that the "Lord of Kings" (the Achaemenid King of Kings, probably Cambyses II) [69] granted the Sidonian king " Dor and Joppa, the mighty lands of Dagon, which are in the plain of Sharon" in recognition of his deeds. [39] The deeds in question probably relate to the contribution of Eshmanazar to the Egyptian campaign of Cambyses II. [69]