From Wikipedia
https://en.wikipedia.org/wiki/Esch-sur-Alzette
Commune in Luxembourg

listen); German: Esch an der Alzette [ˈɛʃ ʔan deːɐ̯ ʔalˈzɛt] or Esch an der Alzig) is a commune with town status in south-western Luxembourg. It is the country's second "city", and its second-most populous commune, with a population of 35,040 inhabitants, as of 2018 [update]. It lies in the south-west of the country, on the border with France and in the valley of the Alzette, which flows through the town. The town is usually referred to as just Esch; however, the full name distinguishes it from the village and commune of Esch-sur-Sûre which lies 45 kilometres (28 miles) further north. The country's capital, Luxembourg City, is roughly 15 km (9.3 mi) to the north-east.

For a long time Esch was a small farming village in the valley of the Uelzecht river. This changed when important amounts of iron ore were found in the area in the 1850s. With the development of the mines and the steel industry the town's population multiplied tenfold in a couple of decades. In 1911 the steel- and iron-producing company ARBED was founded. [1] The development of the steel industry, especially in the south of the country, provided Luxembourg with sustained economic growth during the second half of the 19th century. [2]

In the 1970s, as a result of the steel crisis, the mines and many of the blast furnaces were shut down, the last one, in Esch-Belval, definitely halting its operations in 1997. [2] The blast furnaces were replaced by an electric furnace that is fed with scrap metal rather than iron ore. [3]

Today the industrial wastelands on Belval left behind by the steel industry, are being redeveloped and converted into a new, modern town quarter. New cultural buildings such as the cinema Kinepolis Belval [4] and the Rockhal, Luxembourg's biggest concert hall. [5]

The area around the old blast furnaces will host different structures of the University of Luxembourg, many research centres and the national archives. [6] 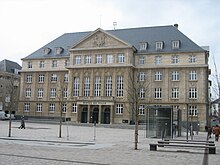 The Lankelz miniature railway operates on Sunday afternoons and public holidays from May to mid-October. [7]

Esch is home to the Conservatoire de Musique. [8]

The town has the longest shopping street in Luxembourg. [9]

Esch is governed by its communal council, consisting of 19 councillors. Elections take place to this body every 6 years, under a system of proportional representation. Currently the mayor is Vera Spautz, of the Luxembourg Socialist Workers' Party (LSAP). [10] The governing majority on the council consists of the LSAP and The Greens. [11]

'G' denotes parties that went on to form the governing majority.

The most recent elections were held on 8 October 2017; the results are listed below. [13]

After the elections, a coalition agreement was signed between 3 parties, the CSV, the Greens, and the DP, who will form the new governing majority on the council. The designated new mayor is Tom Schlesser of Dei Lénk. [14] 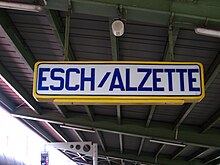 Esch-sur-Alzette is twinned with: [17]