From Wikipedia
https://en.wikipedia.org/wiki/Eratosthenes
Greek mathematician, geographer, poet
This article is about the Greek scholar of the third century BC. For other uses, see Eratosthenes (disambiguation).

Eratosthenes of Cyrene ( /ɛrəˈtɒsθəniːz/; Greek: Ἐρατοσθένης [eratostʰénɛːs]; c. 276 BC – c. 195/194 BC) was a Greek polymath: a mathematician, geographer, poet, astronomer, and music theorist. He was a man of learning, becoming the chief librarian at the Library of Alexandria. His work is comparable to what is now known as the study of geography, and he introduced some of the terminology still used today. [1]

He is best known for being the first person known to calculate the circumference of the Earth, which he did by using the extensive survey results he could access in his role at the Library; his calculation was remarkably accurate. [2] [3] He was also the first to calculate Earth's axial tilt, which also proved to have remarkable accuracy. [4] He created the first global projection of the world, incorporating parallels and meridians based on the available geographic knowledge of his era.

Eratosthenes was the founder of scientific chronology; [5] he endeavoured to revise the dates of the main events of the semi-mythological Trojan War, dating the Sack of Troy to 1183 BC. In number theory, he introduced the sieve of Eratosthenes, an efficient method of identifying prime numbers.

He was a figure of influence in many fields. According to an entry [6] in the Suda (a 10th-century encyclopedia), his critics scorned him, calling him Beta (the second letter of the Greek alphabet) because he always came in second in all his endeavours. [7] Nonetheless, his devotees nicknamed him Pentathlos after the Olympians who were well rounded competitors, for he had proven himself to be knowledgeable in every area of learning. Eratosthenes yearned to understand the complexities of the entire world. [8]

The son of Aglaos, Eratosthenes was born in 276 BC in Cyrene. Now part of modern-day Libya, Cyrene had been founded by Greeks centuries earlier and became the capital of Pentapolis (North Africa), a country of five cities: Cyrene, Arsinoe, Berenice, Ptolemias, and Apollonia. Alexander the Great conquered Cyrene in 332 BC, and following his death in 323 BC, its rule was given to one of his generals, Ptolemy I Soter, the founder of the Ptolemaic Kingdom. Under Ptolemaic rule the economy prospered, based largely on the export of horses and silphium, a plant used for rich seasoning and medicine. [1] Cyrene became a place of cultivation, where knowledge blossomed. Like any young Greek at the time, Eratosthenes would have studied in the local gymnasium, where he would have learned physical skills and social discourse as well as reading, writing, arithmetic, poetry, and music. [9]

Eratosthenes went to Athens to further his studies. There he was taught Stoicism by its founder, Zeno of Citium, in philosophical lectures on living a virtuous life. [10] He then studied under Aristo of Chios, who led a more cynical school of philosophy. He also studied under the head of the Platonic Academy, who was Arcesilaus of Pitane. His interest in Plato led him to write his very first work at a scholarly level, Platonikos, inquiring into the mathematical foundation of Plato's philosophies. [8] Eratosthenes was a man of many perspectives and investigated the art of poetry under Callimachus. [9] He wrote poems: one in hexameters called Hermes, illustrating the god's life history; and another in elegiacs, called Erigone, describing the suicide of the Athenian maiden Erigone (daughter of Icarius). [8] He wrote Chronographies, a text that scientifically depicted dates of importance, beginning with the Trojan War. This work was highly esteemed for its accuracy. George Syncellus was later able to preserve from Chronographies a list of 38 kings of the Egyptian Thebes. Eratosthenes also wrote Olympic Victors, a chronology of the winners of the Olympic Games. It is not known when he wrote his works, but they highlighted his abilities.

These works and his great poetic abilities led the pharaoh Ptolemy III Euergetes to seek to place him as a librarian at the Library of Alexandria in the year 245 BC. Eratosthenes, then thirty years old, accepted Ptolemy's invitation and traveled to Alexandria, where he lived for the rest of his life. Within about five years he became Chief Librarian, a position that the poet Apollonius Rhodius had previously held. As head of the library Eratosthenes tutored the children of Ptolemy, including Ptolemy IV Philopator who became the fourth Ptolemaic pharaoh. He expanded the library's holdings: in Alexandria all books had to be surrendered for duplication. It was said that these were copied so accurately that it was impossible to tell if the library had returned the original or the copy. He sought to maintain the reputation of the Library of Alexandria against competition from the Library of Pergamum. Eratosthenes created a whole section devoted to the examination of Homer, and acquired original works of great tragic dramas of Aeschylus, Sophocles and Euripides. [8]

Eratosthenes made several important contributions to mathematics and science, and was a friend of Archimedes. Around 255 BC, he invented the armillary sphere. In On the Circular Motions of the Celestial Bodies, [11] Cleomedes credited him with having calculated the Earth's circumference around 240 BC, with a high precision. [2]

Eratosthenes believed there was both good and bad in every nation and criticized Aristotle for arguing that humanity was divided into Greeks and barbarians, as well as for arguing that the Greeks should keep themselves racially pure. [12] As he aged, he contracted ophthalmia, becoming blind around 195 BC. Losing the ability to read and to observe nature plagued and depressed him, leading him to voluntarily starve himself to death. He died in 194 BC at 82 in Alexandria. [9]

The measurement of Earth's circumference is the most famous among the results obtained by Eratosthenes, [13] who estimated that the meridian has a length of 252,000 stadia, with an error on the real value between −2.4% and +0.8% (assuming a value for the stadion between 155 and 160 metres). [2] Eratosthenes described his arc measurement technique, [14] in a book entitled On the measure of the Earth, which has not been preserved. 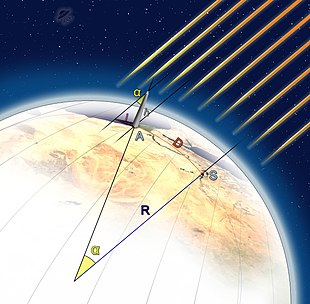 Measure of Earth's circumference according to Cleomedes' simplified version, based on the wrong assumption that Syene is on the Tropic of Cancer and on the same meridian as Alexandria

Eratosthenes' method to calculate the Earth's circumference has been lost; what has been preserved is the simplified version described by Cleomedes to popularise the discovery. [15] Cleomedes invites his reader to consider two Egyptian cities, Alexandria and Syene, modern Aswan. At midday on summer solstice (21-22 June for the north hemisphere) in Syene, the sun was so precisely overhead and no shadows were cast: whereas in Alexandria on the same date, a measuring obelisk cast a shadow of 7.2 degrees.

Under the previous assumptions, says Cleomedes, you can measure the Sun's angle of elevation at noon of the summer solstice in Alexandria, by using a vertical rod (a gnomon) of known length and measuring the length of its shadow on the ground; [18] it is then possible to calculate the angle of the Sun's rays, [19] which he claims to be 7° 12', 7.2°, or 1/50th the circumference of a circle. [20] Taking the Earth as spherical, the Earth's circumference would be fifty times the distance between Alexandria and Syene, that is 250,000 stadia. Since 1 Egyptian stadium is equal to 157.5 metres, the result is 39,375 km, which is 1.4% less than the real number, 40,076 km.

Eratosthenes' method was actually more complicated, as stated by the same Cleomedes, whose purpose was to present a simplified version of the one described in Eratosthenes' book. The method was based on several surveying trips conducted by professional bematists, whose job was to precisely measure the extent of the territory of Egypt for agricultural and taxation-related purposes. [2] Furthermore, the fact that Eratosthenes' measure corresponds precisely to 252,000 stadia might be intentional, since it is a number that can be divided by all natural numbers from 1 to 10: some historians believe that Eratosthenes changed from the 250,000 value written by Cleomedes to this new value to simplify calculations; [21] other historians of science, on the other side, believe that Eratosthenes introduced a new length unit based on the length of the meridian, as stated by Pliny, who writes about the stadion "according to Eratosthenes' ratio". [2] [22]

19th-century reconstruction of Eratosthenes' map of the (for the Greeks) known world, c. 194 BC
See also: History of geodesy and history of longitude

Eratosthenes now continued from his knowledge about the Earth. Using his discoveries and knowledge of its size and shape, he began to sketch it. In the Library of Alexandria he had access to various travel books, which contained various items of information and representations of the world that needed to be pieced together in some organized format. [23] In his three-volume work Geography ( Greek: Geographika), he described and mapped his entire known world, even dividing the Earth into five climate zones: [24] two freezing zones around the poles, two temperate zones, and a zone encompassing the equator and the tropics. [25] He had invented geography. He created terminology that is still used today. He placed grids of overlapping lines over the surface of the Earth. He used parallels and meridians to link together every place in the world. It was now possible to estimate one's distance from remote locations with this network over the surface of the Earth. In the Geography the names of over 400 cities and their locations were shown, which had never been achieved before. [1] Unfortunately, his Geography has been lost to history, but fragments of the work can be pieced together from other great historians like Pliny, Polybius, Strabo, and Marcianus.

Eratosthenes was described by the Suda Lexicon as a Πένταθλος (Pentathlos) which can be translated as "All-Rounder", for he was skilled in a variety of things: He was a true polymath. He was nicknamed Beta because he was great at many things and tried to get his hands on every bit of information but never achieved the highest rank in anything; Strabo accounts Eratosthenes as a mathematician among geographers and a geographer among mathematicians. [28]

Eratosthenes proposed a simple algorithm for finding prime numbers. This algorithm is known in mathematics as the Sieve of Eratosthenes.

In mathematics, the sieve of Eratosthenes (Greek: κόσκινον Ἐρατοσθένους), one of a number of prime number sieves, is a simple, ancient algorithm for finding all prime numbers up to any given limit. It does so by iteratively marking as composite, i.e., not prime, the multiples of each prime, starting with the multiples of 2. The multiples of a given prime are generated starting from that prime, as a sequence of numbers with the same difference, equal to that prime, between consecutive numbers. This is the sieve's key distinction from using trial division to sequentially test each candidate number for divisibility by each prime.

Eratosthenes was one of the most pre-eminent scholarly figures of his time, and produced works covering a vast area of knowledge before and during his time at the Library. He wrote on many topics—geography, mathematics, philosophy, chronology, literary criticism, grammar, poetry, and even old comedies. Unfortunately, there are no documents left of his work after the destruction of the Library of Alexandria. [28]