In geometry, an epicycloid is a plane curve produced by tracing the path of a chosen point on the circumference of a circle—called an epicycle—which rolls without slipping around a fixed circle. It is a particular kind of roulette.

(Assuming the initial point lies on the larger circle.)

If k is a positive integer, then the curve is closed, and has k cusps (i.e., sharp corners).

If k is a rational number, say k = p / q expressed as irreducible fraction, then the curve has p cusps.

Count the animation rotations to see p and q .

If k is an irrational number, then the curve never closes, and forms a dense subset of the space between the larger circle and a circle of radius R + 2r.

on the small circle) varies up and down as

R = radius of large circle and

The epicycloid is a special kind of epitrochoid.

An epicycle with one cusp is a cardioid, two cusps is a nephroid.

An epicycloid and its evolute are similar. [1] 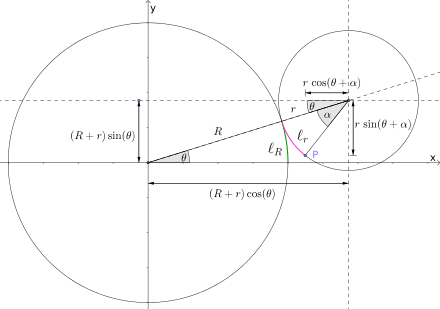 We assume that the position of

is what we want to solve,

is the radian from the tangential point to the moving point

is the radian from the starting point to the tangential point.

Since there is no sliding between the two cycles, then we have that

By the definition of radian (which is the rate arc over radius), then we have that

From these two conditions, we get the identity

By calculating, we get the relation between

From the figure, we see the position of the point

on the small circle clearly.