Environmental design is the process of addressing surrounding environmental parameters when devising plans, programs, policies, buildings, or products. It seeks to create spaces that will enhance the natural, social, cultural and physical environment of particular areas. [1] Classical prudent design may have always considered environmental factors; however, the environmental movement beginning in the 1940s has made the concept more explicit. [2]

Environmental design can also refer to the applied arts and sciences dealing with creating the human-designed environment. These fields include architecture, geography, urban planning, landscape architecture, and interior design. Environmental design can also encompass interdisciplinary areas such as historical preservation and lighting design. In terms of a larger scope, environmental design has implications for the industrial design of products: innovative automobiles, wind power generators, solar-powered equipment, and other kinds of equipment could serve as examples. Currently, the term has expanded to apply to ecological and sustainability issues. 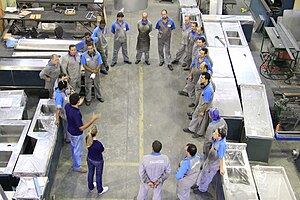 The photo shows a training meeting with factory workers in a stainless steel ecodesign company from Rio de Janeiro, Brazil.

The first traceable concepts of environmental designs focused primarily on solar heating, which began in Ancient Greece around 500 BCE. At the time, most of Greece had exhausted its supply of wood for fuel, leading architects to design houses that would capture the solar energy of the sun. The Greeks understood that the position of the sun varies throughout the year. For a latitude of 40 degrees in summer the sun is high in the south, at an angle of 70 degrees at the zenith, while in winter, the sun travels a lower trajectory, with a zenith of 26 degrees. Greek houses were built with south-facing façades which received little to no sun in the summer but would receive full sun in the winter, warming the house. Additionally, the southern orientation also protected the house from the colder northern winds. This clever arrangement of buildings influenced the use of the grid pattern of ancient cities. With the north–south orientation of the houses, the streets of Greek cities mainly ran east–west.

The practice of solar architecture continued with the Romans, who similarly had deforested much of their native Italian Peninsula by the first century BCE. The Roman heliocaminus, literally 'solar furnace', functioned with the same aspects of the earlier Greek houses. The numerous public baths were oriented to the south. Roman architects added glass to windows to allow for the passage of light and to conserve interior heat as it could not escape. The Romans also used greenhouses to grow crops all year long and to cultivate the exotic plants coming from the far corners of the Empire. Pliny the Elder wrote of greenhouses that supplied the kitchen of the Emperor Tiberius during the year. [3]

Along with the solar orientation of buildings and the use of glass as a solar heat collector, the ancients knew other ways of harnessing solar energy. The Greeks, Romans and Chinese developed curved mirrors that could concentrate the sun's rays on an object with enough intensity to make it burn in seconds. The solar reflectors were often made of polished silver, copper or brass.

Early roots of modern environmental design began in the late 19th century with writer/designer William Morris, who rejected the use of industrialized materials and processes in wallpaper, fabrics and books his studio produced. He and others, such as John Ruskin felt that the industrial revolution would lead to harm done to nature and workers.

The narrative of Brian Danitz and Chris Zelov's documentary film Ecological Design: Inventing the Future asserts that in the decades after World War II, "The world was forced to confront the dark shadow of science and industry." From the middle of the twentieth century, thinkers like Buckminster Fuller have acted as catalysts for a broadening and deepening of the concerns of environmental designers. Nowadays, energy efficiency, appropriate technology, organic horticulture and agriculture, land restoration, New Urbanism, and ecologically sustainable energy and waste systems are recognized considerations or options and may each find application.

By integrating renewable energy sources such as solar photovoltaic, solar thermal, and even geothermal energy into structures, it is possible to create zero emission buildings, where energy consumption is self-generating and non-polluting. It is also possible to construct "energy-plus buildings" which generate more energy than they consume, and the excess could then be sold to the grid. In the United States, the LEED Green Building Rating System rates structures on their environmental sustainability.

The concept of "environmental" in these programs is quite broad and can encompass aspects of the natural, built, work, or social environments.

The following universities offer a Ph.D. in environmental design and planning:

Virginia Tech until recently offered the degree program, but has since replaced it with programs in "architecture and design research" and "planning, governance, and globalization".

Examples of the environmental design process include use of roadway noise computer models in design of noise barriers and use of roadway air dispersion models in analyzing and designing urban highways.

Designers consciously working within this more recent framework of philosophy and practice seek a blending of nature and technology, regarding ecology as the basis for design. Some believe that strategies of conservation, stewardship, and regeneration can be applied at all levels of scale from the individual building to the community, with benefit to the human individual and local and planetary ecosystems.