From Wikipedia
https://en.wikipedia.org/wiki/Energy_policy
How a government or business deals with the physical property used for work
For the academic journal, see Energy Policy (journal).

Energy policy is the manner in which a given entity (often governmental) has decided to address issues of energy development including energy conversion, distribution and use. The attributes of energy policy may include legislation, international treaties, incentives to investment, guidelines for energy conservation, taxation and other public policy techniques. Energy is a core component of modern economies. A functioning economy requires not only labor and capital but also energy, for manufacturing processes, transportation, communication, agriculture, and more. Energy planning is more detailed than energy policy.

Concerning the term of energy policy, the importance of implementation of an eco-energy-oriented policy at a global level to address the issues of global warming and climate changes should be accentuated.[ by whom?] [1]

Although research is ongoing, the "human dimensions" of energy use are of increasing interest to business, utilities, and policymakers. Using the social sciences to gain insights into energy consumer behavior can empower[ how?] policymakers to make better decisions about broad-based climate and energy options. This could facilitate more efficient energy use, renewable-energy commercialization, and carbon-emission reductions. [2] Access to energy is critical for basic social needs, such as lighting, heating, cooking, and healthcare. Given the importance of energy, the price of energy has a direct effect on jobs, economic productivity, business competitiveness, and the cost of goods and services. Energy sources are measured in different physical units: liquid fuels in barrels or gallons, natural gas in cubic feet, coal in short tons, and electricity in kilowatts and kilowatthours.

Private Energy policy refers to a company's approach to energy.[ citation needed] In 2019, some companies “have committed to set climate targets across their operations and value chains aligned with limiting global temperature rise to 1.5°C above pre-industrial levels and reaching net-zero emissions by no later than 2050”. [3]

USAID's Mission Director to Pakistan, John Groarke in a group photo with the live-line trainers for Energy Policy Program - September, 2015.

A national energy policy comprises a set of measures involving that country's laws, treaties and agency directives. The energy policy of a sovereign nation may include one or more of the following measures:

Frequently the dominant issue of energy policy is the risk of supply-demand mismatch (see: energy crisis). Current energy policies also address environmental issues (see: climate change), particularly challenging because of the need to reconcile global objectives and international rules with domestic needs and laws. [4] Some governments state explicit energy policy, but, declared or not, each government practices some type of energy policy. Economic and energy modelling can be used by governmental or inter-governmental bodies as an advisory and analysis tool (see: economic model, POLES).

There are a number of elements that are naturally contained in a national energy policy, regardless of which of the above measures was used to arrive at the resultant policy. The chief elements intrinsic to an energy policy are:

Even within a state it is proper to talk about energy policies in plural. Influential entities, such as municipal or regional governments and energy industries, will each exercise policy. Policy measures available to these entities are lesser in sovereignty, but may be equally important to national measures. In fact, there are certain activities vital to energy policy which realistically cannot be administered at the national level, such as monitoring energy conservation practices in the process of building construction, which is normally controlled by state-regional and municipal building codes (although can appear basic federal legislation).

Brazil is the 10th largest energy consumer in the world and the largest in South America. At the same time, it is an important oil and gas producer in the region and the world's second largest ethanol fuel producer. The governmental agencies responsible for energy policy are the Ministry of Mines and Energy (MME), the National Council for Energy Policy (CNPE, in the Portuguese-language acronym), the National Agency of Petroleum, Natural Gas and Biofuels (ANP) and the National Agency of Electricity (ANEEL). [6] [7] State-owned companies Petrobras and Eletrobrás are the major players in Brazil's energy sector. [8] 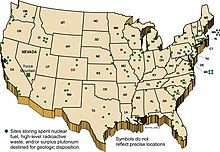 The current locations across the U.S. where nuclear waste is stored

Currently, the major issues in U.S. energy policy revolve around the rapidly growing production of domestic and other North American energy resources. The U.S. drive toward energy independence and less reliance on oil and coal is fraught with partisan conflict because these issues revolve around how best to balance both competing values, such as environmental protection and economic growth, and the demands of rival organized interests, such as those of the fossil fuel industry and of the newer renewable energy businesses. The Energy Policy Act (EPA) addresses energy production in the United States, including: (1) energy efficiency; (2) renewable energy; (3) oil and gas; (4) coal; (5) Tribal energy; (6) nuclear matters and security; (7) vehicles and motor fuels, including ethanol; (8) hydrogen; (9) electricity; (10) energy tax incentives; (11) hydropower and geothermal energy; and (12) climate change technology. [9] In the United States, British thermal units (Btu), a measure of heat energy, is commonly used for comparing different types of energy to each other. In 2018, total U.S. primary energy consumption was equal to about 101,251,057,000,000,000 British thermal units (Btu), or about 101.3 quadrillion Btu.

The goal of the Southern Gas Corridor, which connects the giant Shah Deniz gas field in Azerbaijan to Europe, is to reduce Europe's dependency on Russian gas.

Although the European Union has legislated, set targets, and negotiated internationally in the area of energy policy for many years, and evolved out of the European Coal and Steel Community, the concept of introducing a mandatory common European Union energy policy was only approved at the meeting of the European Council on October 27, 2005 in London. Following this the first policy proposals, Energy for a Changing World, were published by the European Commission, on January 10, 2007. The most well known energy policy objectives in the EU are 20/20/20 objectives, binding for all EU Member States. The EU is planning to increase the share of renewable energy in its final energy use to 20%, reduce greenhouse gases by 20% and increase energy efficiency by 20%. [10]

In September 2010, the German government adopted a set of ambitious goals to transform their national energy system and to reduce national greenhouse gas emissions by 80 to 95% by 2050 (relative to 1990). [11] This transformation become known as the Energiewende. Subsequently, the government decided to the phase-out the nation's fleet of nuclear reactors, to be complete by 2022. [12] As of 2014, the country is making steady progress on this transition. [13]

The energy policy of the United Kingdom has achieved success in reducing energy intensity (but still relatively high), reducing energy poverty, and maintaining energy supply reliability to date.[ when?] The United Kingdom has an ambitious goal to reduce carbon dioxide emissions for future years, but it is unclear whether the programs in place are sufficient to achieve this objective (the way to be so efficient as France is still hard). Regarding energy self sufficiency, the United Kingdom policy does not address this issue, other than to concede historic energy self sufficiency is currently ceasing to exist (due to the decline of the North Sea oil production). With regard to transport, the United Kingdom historically has a good policy record encouraging public transport links with cities, despite encountering problems with high speed trains, which have the potential to reduce dramatically domestic and short-haul European flights. The policy does not, however, significantly encourage hybrid vehicle use or ethanol fuel use, options which represent viable short term means to moderate rising transport fuel consumption. Regarding renewable energy, the United Kingdom has goals for wind and tidal energy. The White Paper on Energy, 2007, set the target that 20% of the UK's energy must come from renewable sources by 2020.

The Soviet Union and Russia

Russia is a key oil and gas supplier to Europe

The Soviet Union was the largest energy provider in the world until the late 1980s. Russia, one of the world's energy superpowers, is rich in natural energy resources, the world's leading net energy exporter, and a major supplier to the European Union. The main document defining the energy policy of Russia is the Energy Strategy, which initially set out policy for the period up to 2020, later was reviewed, amended and prolonged up to 2030. While Russia has also signed and ratified the Kyoto Protocol. Numerous scholars note that Russia uses its energy exports as a foreign policy instrument towards other countries. [14] [15]

In September 2016, both chambers of the Swiss Parliament voted for the Energiestrategie 2050, a set of measures to replace electrical energy produced by atomic reactors with renewable energy, reduce the use of fossil fuel and increase the efficiency of energy consumption. This decision was challenged by a national Referendum.

In May 2017, the Swiss people voted against the Referendum, thereby confirming the decision taken by the parliament. [16]

Turkey is trying to secure national energy supply and reduce imports, as in the 2010s fossil fuel costs were a large part of Turkey's import bill. This includes using energy efficiently. However, as of 2019, little research has been done on the policies Turkey uses to reduce energy poverty, which also include some subsidies for home heating and electricity use. The energy strategy includes "within the context of sustainable development, giving due consideration to environmental concerns all along the energy chain". Turkey's energy policy has been criticised for not looking much beyond 2023, not sufficiently involving the private sector, and for being inconsistent with Turkey's climate policy.

The energy policy of India is characterized by trades between four major drivers:

In recent years, these challenges have led to a major set of continuing reforms, restructuring and a focus on energy conservation.

The energy policy of Thailand is characterized by 1) increasing energy consumption efficiency, 2) increasing domestic energy production, 3) increasing the private sector's role in the energy sector, 4) increasing the role of market mechanisms in setting energy prices. These policies have been consistent since the 1990s, despite various changes in governments. The pace and form of industry liberalization and privatization has been highly controversial.

The first National Energy Policy (NEP) of Bangladesh was formulated in 1996 by the Ministry of Power, Energy and Mineral resources to ensure proper exploration, production, distribution and rational use of energy resources to meet the growing energy demands of different zones, consuming sectors and consumers groups on a sustainable basis.[1] With rapid change of global as well as domestic situation, the policy was updated in 2004. The updated policy included additional objectives namely to ensure environmentally sound sustainable energy development programmes causing minimum damage to environment, to encourage public and private sector participation in the development and management of energy sector and to bring the entire country under electrification by the year 2020.[2]

Australia's energy policy features a combination of coal power stations and hydro electricity plants. The Australian government has decided not to build nuclear power plants, although it is one of the world's largest producers of uranium.