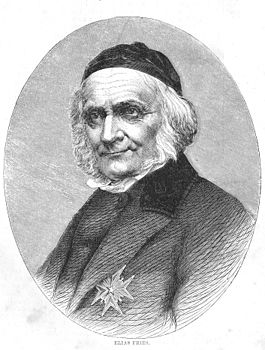 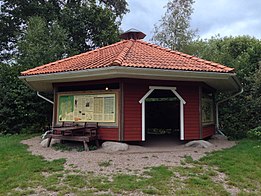 Fries was born at Femsjö ( Hylte Municipality), Småland, the son of the pastor there. [1] He attended school in Växjö.

He acquired an extensive knowledge of flowering plants from his father. [2] In 1811 Fries entered Lund University [2] where he obtained a doctorate in 1814. In the same year he was appointed an associate professorship in botany. He was elected a member of the Royal Swedish Academy of Sciences, and in 1824, became a full professor. In 1834 he became Borgström professor [2] (Swed. Borgströmianska professuren, a chair endowed by Erik Eriksson Borgström, 1708–1770) in applied economics at Uppsala University. The position was changed to "professor of botany and applied economics" in 1851. He was elected a Foreign Honorary Member of the American Academy of Arts and Sciences in 1849. [3] That year he was also appointed director of the Uppsala University Botanical Garden. In 1853, he became rector of the University. [4]

Fries is considered to be, after Christian Hendrik Persoon, a founding father of the modern taxonomy of mushrooms. His taxonomy of mushrooms was influenced by Goethe and the German romantics. He utilized spore color and arrangement of the hymenophore (pores, gills, teeth etc.) as major taxonomic characteristics. [6] [7]

When he died, The Times commented: "His very numerous works, especially on fungi and lichens, give him a position as regards those groups of plants only comparable to that of Linnaeus". [9] Fries was succeeded in the Borgström professorship (from 1859 to 1876) by Johan Erhard Areschoug, [10] after whom Theodor Magnus Fries, the son of Elias, held the chair (from 1877 to 1899). [11]

The standard author abbreviation Fr. is used to indicate this person as the author when citing a botanical name. [12]

His son was Theodor Magnus Fries.