From Wikipedia
https://en.wikipedia.org/wiki/Electronic_design_automation
software assisting the design of electronics systems such as integrated circuits and computer hardware
"ECAD" redirects here. For the Brazilian organization, see ECAD (Brazil). For other uses, see ECAD (disambiguation).

Electronic design automation (EDA), also referred to as electronic computer-aided design (ECAD), [1] is a category of software tools for designing electronic systems such as integrated circuits and printed circuit boards. The tools work together in a design flow that chip designers use to design and analyze entire semiconductor chips. Since a modern semiconductor chip can have billions of components, EDA tools are essential for their design; this article in particular describes EDA specifically with respect to integrated circuits (ICs).

Prior to the development of EDA, integrated circuits were designed by hand and manually laid out. Some advanced shops used geometric software to generate tapes for a Gerber photoplotter, responsible for generating a monochromatic exposure image, but even those copied digital recordings of mechanically drawn components. The process was fundamentally graphic, with the translation from electronics to graphics done manually; the best-known company from this era was Calma, whose GDSII format is still in use today. By the mid-1970s, developers started to automate circuit design in addition to drafting and the first placement and routing tools were developed; as this occurred, the proceedings of the Design Automation Conference catalogued the large majority of the developments of the time.

The next era began following the publication of "Introduction to VLSI Systems" by Carver Mead and Lynn Conway in 1980; this groundbreaking text advocated chip design with programming languages that compiled to silicon. The immediate result was a considerable increase in the complexity of the chips that could be designed, with improved access to design verification tools that used logic simulation. Often the chips were easier to lay out and more likely to function correctly, since their designs could be simulated more thoroughly prior to construction. Although the languages and tools have evolved, this general approach of specifying the desired behavior in a textual programming language and letting the tools derive the detailed physical design remains the basis of digital IC design today.

The earliest EDA tools were produced academically. One of the most famous was the "Berkeley VLSI Tools Tarball", a set of UNIX utilities used to design early VLSI systems. Still widely used are the Espresso heuristic logic minimizer, responsible for circuit complexity reductions and Magic, a computer-aided design platform. Another crucial development was the formation of MOSIS, a consortium of universities and fabricators that developed an inexpensive way to train student chip designers by producing real integrated circuits. The basic concept was to use reliable, low-cost, relatively low-technology IC processes and pack a large number of projects per wafer, with several copies of chips from each project remaining preserved. Cooperating fabricators either donated the processed wafers or sold them at cost. as they saw the program helpful to their own long-term growth.

1981 marked the beginning of EDA as an industry. For many years, the larger electronic companies, such as Hewlett Packard, Tektronix and Intel, had pursued EDA internally, with managers and developers beginning to spin out of these companies to concentrate on EDA as a business. Daisy Systems, Mentor Graphics and Valid Logic Systems were all founded around this time and collectively referred to as DMV. In 1981, the U.S. Department of Defense additionally began funding of VHDL as a hardware description language. Within a few years, there were many companies specializing in EDA, each with a slightly different emphasis.

The first trade show for EDA was held at the Design Automation Conference in 1984 and in 1986, Verilog, another popular high-level design language, was first introduced as a hardware description language by Gateway Design Automation. Simulators quickly followed these introductions, permitting direct simulation of chip designs and executable specifications. Within several years, back-ends were developed to perform logic synthesis.

Current digital flows are extremely modular, with front ends producing standardized design descriptions that compile into invocations of units similar to cells without regard to their individual technology. Cells implement logic or other electronic functions via the utilisation of a particular integrated circuit technology. Fabricators generally provide libraries of components for their production processes, with simulation models that fit standard simulation tools.

Most analog circuits are still designed in a manual fashion, requiring specialist knowledge that is unique to analog design (such as matching concepts). [2] Hence, analog EDA tools are far less modular, since many more functions are required, they interact more strongly and the components are, in general, less ideal.

EDA for electronics has rapidly increased in importance with the continuous scaling of semiconductor technology. [3] Some users are foundry operators, who operate the semiconductor fabrication facilities ("fabs") and additional individuals responsible for utilising the technology design-service companies who use EDA software to evaluate an incoming design for manufacturing readiness. EDA tools are also used for programming design functionality into FPGAs or field-programmable gate arrays, customisable integrated circuit designs. 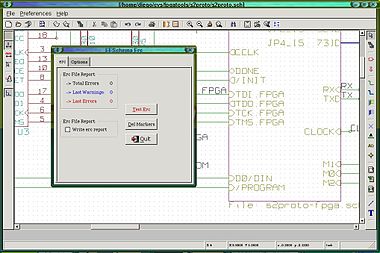 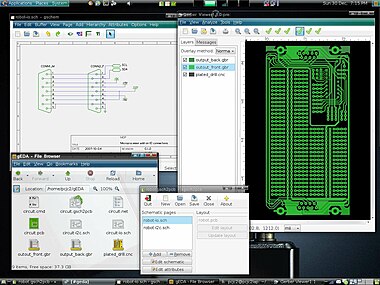 Market capitalization and company name as of December 2011 [update]: [5]

Note: EEsof should likely be on this list, [10] but it does not have a market cap as it is the EDA division of Keysight.

Many EDA companies acquire small companies with software or other technology that can be adapted to their core business. [11] Most of the market leaders are amalgamations of many smaller companies and this trend is helped by the tendency of software companies to design tools as accessories that fit naturally into a larger vendor's suite of programs on digital circuitry; many new tools incorporate analog design and mixed systems. [12] This is happening due to a trend to place entire electronic systems on a single chip.