The 13th Earl of Derby 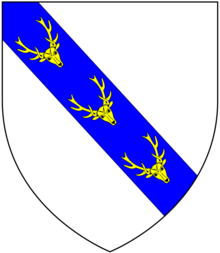 Arms of Stanley: Argent, on a bend azure three buck's heads cabossed or

He was the eldest child and only son and heir of Edward Smith-Stanley, 12th Earl of Derby (1752-1834) by his wife Elizabeth Hamilton, a daughter of James Hamilton, 6th Duke of Hamilton.

He was educated at Eton College and Trinity College, Cambridge. [1] On 10 November 1796 he was appointed a Deputy Lieutenant of Lancashire [2] and in the same year he was elected as a Member of Parliament for Preston. He held this seat until 1812 and then represented Lancashire until 1832, when he was ennobled as Baron Stanley of Bickerstaffe, of Bickerstaffe in the County Palatine of Lancaster.

He was commissioned Colonel of the 1st Royal Lancashire Supplementary Militia on 1 March 1797; [3] this regiment subsequently became the 2nd Royal Lancashire Militia. [4] He was breveted as a colonel in the regular Army with seniority from that date, retaining the rank until his regiment was disembodied, [5] which occurred at the end of 1799. [4] He resigned his commission as colonel on 13 April 1847.

In 1834 he succeeded his father as 13th Earl of Derby and withdrew from politics, instead concentrating on his natural history collection at Knowsley Hall, near Liverpool. He had a large collection of living animals: at his death there were 1,272 birds and 345 mammals at Knowsley, shipped to England by explorers such as Joseph Burke. From 1828 to 1833 he was President of the Linnean Society. Many of Derby's collections are now housed in Liverpool's World Museum. Several species were named after him, for example the Derbyan parakeet, Psittacula derbiana and an Australian species of parrot named firstly by Nicholas Vigors as Platycercus stanleyii, in 1830 when he was Lord Stanley, and referred to in the vernacular as "The Earl of Derby’s Parrakeet" by the author John Gould in the sixth volume of his magnum opus Birds of Australia. However the latter species was found to have been named previously as Platycercus icterotis, and thus Platycercus stanleyii was found to have been an invalid name due to the pre-existence of a published description for the species, according to "the inviolable laws of precedence in deliberations on biological nomenclature". [6] From the Earl of Derby's Collection, the State Library of NSW purchased six volumes of exquisite Australian natural history drawings dating from the early days of British settlement in NSW and this Library publishes talks and exhibitions of its research on this collection. [7]

Arms of Hornby: Or, two chevronels between three bugle-horns sable stringed gules on a chief of the second as many eagle's legs erased of the first [8]