Obverse of the 2018 World War I Centennial silver dollar

The United States Mint has minted numerous commemorative coins to commemorate persons, places, events, and institutions since 1848. Many of these coins are not intended for general circulation, but are still legal tender. [1] The mint also produces commemorative medals, which are similar to coins but do not have a face value, and therefore are not legal tender. [2]

The earliest commemorative coin minted by the US Mint was the 1848 "CAL" quarter eagle, which commemorated the finding of gold in California. [3] These coins were standard quarter eagles that were modified by punching CAL. onto the reverse above the eagle.

Most standard US commemorative coin lists begin with the 1892 Columbian half dollar commemorating the 400th anniversary of Columbus' voyage to America. The following year, the Columbian Exposition quarter dollar featuring Queen Isabella of Spain was issued. [4]

In 1915, the mint issued the Panama–Pacific half union, which had a face value of $50. This was the first time a commemorative coin was produced in a denomination that was not issued for circulation (a half union coin was proposed, but was never released into circulation). The coin was offered in both round and octagonal versions, the latter being the only US coin that is not round. [5]

In 1925, a commemorative 50-cent coin was released that showed Robert E. Lee and Stonewall Jackson. Money raised from the sale of the coins was combined with money raised by the United Daughters of the Confederacy and the Stone Mountain Confederate Memorial Association in order to fund the carving of a Confederate monument at Stone Mountain. [6]

The 1926 United States Sesquicentennial half dollar was the second United States coin to feature a living person at the time of its minting. The obverse of the coin featured busts of George Washington and Calvin Coolidge. [7] (The first was the 1921 Alabama Centennial half dollar, which showed a bust of then-Governor Thomas Kilby.) Coolidge remains the only president depicted on coinage during his lifetime.

In 1982, the US Mint resumed its commemorative coin program with the George Washington 250th Anniversary half dollar. Unlike the original commemoratives, only a few coins are released each year and are more popular with collectors. [10]

The Library of Congress eagle of 2000 was the first bi-metallic coin issued by the US Mint. [11] Later that year, the mint released a 1,000 Icelandic króna coin commemorating the 1,000th anniversary of Leif Ericson's discovery of the Americas. This coin was struck on the same planchet as the silver dollar that also commemorated the event. [12]

The year 2017 marked the 225th anniversary of the US Mint. Although no traditional commemorative coins were issued for the occasion, the mint did produce a $100 coin, a special uncirculated mint set featuring coins with an "enhanced" finish, and a circulating penny featuring the P mint mark. [13] [14] [15] 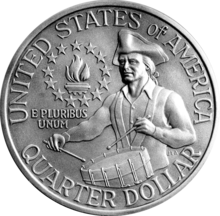 Circulating commemorative coins have been somewhat more unusual in the United States. These are coins that are minted to commemorate a particular person, place, event, or institution, but are intended to enter general circulation.

The first circulating commemorative coin of the United States was the 1921 Peace dollar. The coin was originally intended to be produced for one year to commemorate the end of World War I, although the design proved popular and continued to be produced until silver dollar production ended in 1935. [16]

The next planned circulating commemorative coin was a half dollar to commemorate the 200th anniversary of the birth of George Washington. The coin was to have been struck for one year only in 1932, however, no circulating half dollars were struck from 1930 until 1934 due to a lack of demand caused by the Great Depression. [17] The anniversary was instead commemorated with the Washington quarter, which, like the Peace dollar, later became a regular issue coin.

In 1975 and 1976, the Washington quarter was also used to commemorate the United States Bicentennial with a circulating commemorative. The Kennedy half-dollar and Eisenhower dollar also featured commemorative designs for circulation during these two years. All US Bicentennial commemoratives were dated 1776–1976, despite being produced throughout 1975–76. [18]

More recently, the State Quarters program began in 1999 circulating five different commemoratives each year with reverses for each of the 50 States in the order of their admission to the Union. In 2009, six quarters commemorating the District of Columbia, two commonwealths, and three territories were issued. [19] [20]

In 2004–2005 the mint issued four commemorative Westward Journey nickel, celebrating the 200th anniversaries of the Louisiana Purchase and the Corps of Discovery.

The Presidential dollar coins, the first of which was released in 2007, commemorate deceased presidents of the United States. The program ended in 2016 when the last eligible president, Ronald Reagan, was commemorated ( George H. W. Bush was still alive at the time).

In 2009, four commemorative one cent pieces were issued to mark the bicentennial of the birth of Abraham Lincoln. This year also saw the release of the first Native American dollar coin.

Beginning in 2010 and continuing through at least 2021, a new series of quarters, the America the Beautiful Quarters, was issued to recognize America's National Parks, with five quarters issued per year. [21] When this program is completed, 23 years will have passed in which all quarters minted were commemorative.

In 2018, the American Innovation $1 Coin Program was launched. The program will run from 2019–2032, commemorating an inventor or an invention from each state and six territories. An introductory coin was released in 2018. These coins do not circulate as of 2019, as no dollar coins have been minted for circulation since 2012 due to a lack of demand. Should there be a need for more dollar coins before 2032, however, some American Innovation dollars may enter circulation.