From Wikipedia
https://en.wikipedia.org/wiki/Earl_of_Warwick
Countess of Warwick redirects here; for the apple of that name, see Beauty of Kent (apple). 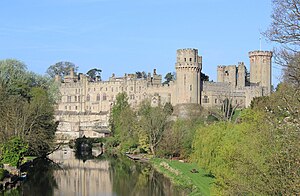 Warwick Castle, traditionally the seat of the Earls of Warwick, on the River Avon

Earl of Warwick is one of the most prestigious titles in the peerages of the United Kingdom. The title has been created four times in English history, and the name refers to Warwick Castle and the town of Warwick.

The first creation came in 1088, and the title was held by the Beaumont and later by the Beauchamp families. The 14th earl was created Duke of Warwick in 1445, a title which became extinct on his early death the following year. The best-known earl of this creation was the 16th earl jure uxoris, Richard Neville, who was involved in the deposition of two kings, a fact which later earned him the epithet of "Warwick the Kingmaker". This creation became extinct on the death of the 17th earl in 1499.

The title was revived in 1547 for the powerful statesman John Dudley, 1st Viscount Lisle, who was later made Duke of Northumberland. The earldom was passed on during his lifetime to his eldest son, John, but both father and son were attainted in 1554. The title was recreated or restored in 1561 in favour of Ambrose Dudley, younger son of the Duke of Northumberland. However, Ambrose was childless and the earldom became extinct on his death in 1590.

It was created for a third time in 1618 for Robert Rich, 3rd Baron Rich, in spite of the fact that the Rich family was not in possession of Warwick Castle. From 1673, the earls also held the title of Earl of Holland. All of the titles became extinct on the death of the 8th earl in 1759.

The earldom was revived the same year in favour of Francis Greville, 1st Earl Brooke. The Greville family was in possession of Warwick Castle, and the title and castle were thereby re-united for the first time in over a century. The 1759 creation is extant and currently held by Guy Greville, 9th Earl of Warwick. However, Warwick Castle was sold by the family in 1978, and they currently live in Australia. 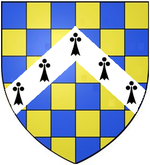 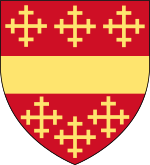 Arms of Beauchamp: Gules, a fesse between six cross crosslets or 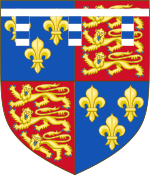 The medieval earldom created in 1088 was held to be heritable via a female line of descent, and thus was held by members of several different families. It was traditionally associated in its feudal form with possession of Warwick Castle. The ancient heraldic device of the Earls of Warwick, the Bear and Ragged Staff, is believed to derive from two legendary Earls, Arthal and Morvidus. Arthal is thought to mean "bear", while Morvidus was to have slain a giant "with a young ash tree torn up by the roots." [5] Alternatively the emblem of a bear (Latin ursus) is believed to refer to Urse d'Abetot [6] ( c. 1040 – 1108), 1st feudal baron of Salwarpe [7] in Worcestershire, a Norman who followed King William the Conqueror to England, and served as Sheriff of Worcestershire. His heir was his son-in-law Walter de Beauchamp (died 1130/3), whose descendant was William de Beauchamp, 9th Earl of Warwick (c.1238-1298).

The first Earl of Warwick was Henry de Beaumont (d.1119), second son of Roger de Beaumont (d. circa 1094) by his wife Adeline de Meulan (c. 1014/20-1081), daughter and heiress of Waleran III, Count of Meulan. Henry's elder brother was Robert de Beaumont, 1st Earl of Leicester, Count of Meulan, who fought at the Battle of Hastings with William the Conqueror. The family name of "Beaumont" was Latinised to de Bello Monte ("from the beautiful mountain"); the Warwick branch of the family was also known as de Newburgh, Latinised to de Novo Burgo ("from the new borough/town"). Henry changed his name to "de Newburgh", after the Castle de Neubourg, his home in Normandy, [8] an ancient Beaumont possession. Henry became Constable of Warwick Castle in 1068 and Earl of Warwick in 1088 as reward for his support for the king during the Rebellion of 1088.

This precedence was disputed however and with Henry's death in 1445, also without male issue, the dukedom was extinguished. The earldom went to his infant daughter, and on her death aged 5 a few years later passed to Henry's sister Anne de Beauchamp, 16th Countess of Warwick and her husband Richard Neville, 16th Earl of Warwick, who "succeeded in right of his wife" but was subsequently "confirmed" in that title on 23 July 1449 which confirmation he thereafter resigned and was definitively created Earl of Warwick by letters patent dated 2 March 1450, with his wife being similarly created Countess of Warwick. [9] He is known to history as "Warwick the Kingmaker" and died without male issue in 1471, aged 42, when the Earldom fell into abeyance between his two daughters. [9] After Richard Neville's death the title was passed through his eldest daughter Isabel Neville to her husband George Plantagenet, 1st Duke of Clarence, brother of Kings Edward IV and Richard III, who on 25 March 1472 by letters patent was created Earl of Warwick (and Earl of Salisbury). [10] Although he was so created, The Complete Peerage nevertheless terms him the 17th Earl of Warwick, [11] which suggests perhaps that the creation was considered a mere formality and confirmation of his inheritance. He was attainted and executed in 1478 whereupon his titles became forfeited. [11] His Earldom was forfeited and thus not able to be inherited by his son Edward Plantagenet, who did however manage to inherit it from his maternal grandmother Anne de Beauchamp (d.1492), wife of "Warwick the Kingmaker", who had been created Countess of Warwick by letters patent in 1450, at the same time her husband was created Earl of Warwick. He thus became Edward Plantagenet, 17th Earl of Warwick, but on his beheading for treason in 1499 the title became forfeited. [11]

Arms of Dudley: Or, a lion rampant double-queued vert

The title was next conferred upon the powerful statesman and soldier John Dudley, 1st Viscount Lisle. He had already been created Viscount Lisle in right of his deceased mother, Elizabeth Grey, in 1543, and was made Earl of Warwick in the Peerage of England in 1547. In 1551 he was further honoured when he was created Duke of Northumberland. In January 1553 Parliament passed the earldom to his eldest son John, the second Earl. He died young in 1554, and having been attainted along with his father in August 1553, the title became extinct until it was revived in 1561 for his younger brother Ambrose, the third Earl. He served as Master-General of the Ordnance and Lord Lieutenant of Warwickshire. On his death in 1590 the earldom became extinct.

Arms of Rich: Gules, a chevron between three crosses botonée or

The title was re-created when Robert Rich, 3rd Baron Rich, was made Earl of Warwick in 1618. This was despite the fact that the Rich family were not in possession of Warwick Castle (this was in the hands of the Greville family; see the 1759 creation below). His second son the Honourable Henry Rich was created Baron Kensington in 1623 and Earl of Holland in 1624. Lord Warwick was succeeded by his eldest son, the second Earl. He represented Maldon in the House of Commons and served as Lord Lieutenant of Essex.

His eldest son, the third Earl, sat as Member of Parliament for Essex. He died without surviving male issue and was succeeded by his younger brother, the fourth Earl. He represented Sandwich and Essex in Parliament. On his death the line of the second Earl of Warwick failed and the titles were inherited by his first cousin Robert Rich, 2nd Earl Holland, who became the fifth Earl of Warwick as well. He was the son of the aforementioned Henry Rich, 1st Earl of Holland, younger son of the first Earl of Warwick (see the Earl of Holland for earlier history of this branch of the family). This line of the family failed on the early death of his grandson, the seventh Earl, in 1721. The late Earl was succeeded by his second cousin Edward Rich, the eighth Earl. He was the grandson of the Hon. Cope Rich, younger son of the first Earl of Holland. On his death in 1759 all the titles became extinct.

Lady Mary Rich, daughter of the first Earl of Holland, married Sir John Campbell, 5th Baronet, who was created Earl of Breadalbane and Holland in 1681. Also, Lady Elizabeth Rich, only daughter and heiress of the fifth Earl of Warwick and second Earl of Holland, married Francis Edwardes. Their son William Edwardes succeeded to parts of the Rich estates and was created Baron Kensington in the Peerage of Ireland in 1776, [12] a revival of the barony attached to the earldom of Holland. 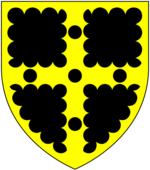 Arms of Greville: Sable, on a cross engrailed or five pellets all within a bordure engrailed of the second

The title was again created in 1759 when Francis Greville, 8th Baron Brooke was made Earl of Warwick in the Peerage of Great Britain. [13] In 1746 he had been created Earl Brooke, of Warwick Castle in the County of Warwick, in the Peerage of Great Britain. [14] The earldom and Warwick Castle were thereby re-united for the first time in over a century. In 1767 the Earl petitioned the House of Lords for permission to use just the more prestigious title and style of "Earl of Warwick" only, with the precedence of 1746. Such permission was never granted but the Earls nevertheless ceased to use the Brooke earldom in style, and have always been known (except in the House of Lords) simply as The Earl of Warwick.