From Wikipedia
https://en.wikipedia.org/wiki/Dunkery_Hill
For the steamship, see SS Dunkery Beacon.

The sandstone hill rises to 1,705 feet (520 m) and provides views over the surrounding moorland, the Bristol Channel and hills up to 86 miles (138 km) away. The site has been visited by humans since the Bronze Age, and contains several burial mounds in the form of cairns and bowl barrows. Sweetworthy on the lower slopes is the site of two Iron Age hill forts or enclosures and a deserted medieval settlement. The hill is part of a Site of Special Scientific Interest and National nature reserve. It was in private ownership until the 20th century, when it was donated to the National Trust by Sir Thomas Acland, Colonel Wiggin and Allan Hughes; a stone cairn was erected at the summit to commemorate the event. 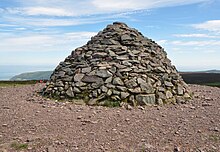 Dunkery lies just four miles (6.4 km) from the Bristol Channel at Porlock. The shortest route of ascent goes from the car park at Dunkery Gate, and is just 0.75 miles (1.2 km) long. There are extensive views from the summit, from where the Bristol and English Channel coasts, the Brecon Beacons including Pen Y Fan, Bodmin Moor, Dartmoor, the Severn Bridges and Cleeve Hill 86 miles (138 km) away in Gloucestershire are visible. [7]

Dunkery Hill was part of the "Royal Forest of Exmoor", established by Henry II according to the late 13th-century Hundred Rolls. There has been some debate about the origin of the name "Dunkery" and its predecessors "Duncrey" and "Dunnecray". [8] Eilert Ekwall suggests that it comes from the Welsh din meaning hillfort and creic or creag meaning rock. [9] [10]

The National Trust plaque on the summit

Sweetworthy, on Dunkery Hill's north-facing slope, is the site of two Iron Age hill forts or enclosures; [21] [22] one has a single rampart and external ditch, enclosing 0.25 hectares (0.62 acres). [23] The rampart is still visible, and the ditch on the east side is used as a trackway. [24] [25] There was a defended settlement above the main site. [26] It is also the site of a deserted medieval settlement, which has been designated an ancient monument. [27] [28] It has been added to the Heritage at Risk Register because of the vulnerability to plant growth. [29]

In 1918 Sir Thomas Acland granted to the National Trust a 500-year lease of a large part of the Holnicote Estate, including Dunkery Hill. [30] Dunkery Hill was put up for sale in 1928. Labour Party activist and Member of Parliament Margaret Bondfield asked in the House of Commons if the government was willing to have it designated an ancient monument, to preserve it for future generations. She received the reply that although the government was agreeable to having the hill listed there were no funds available for its purchase; [31] the beacon and surrounding mounds were subsequently designated an ancient monument. [32] The beacon itself, and 960 acres (390 ha) of surrounding land, was donated in 1932 by Colonel W.W. Wiggin. A further 945 acres (382 ha) of nearby land was donated in 1934 by Mrs Hughes in memory of her husband Alan Hughes of Lynch Allerford, Minehead. [30] The donations were commemorated in 1935 with an event when a plaque was attached to the summit memorial cairn. Further parts of the Holnicote Estate, which includes other land donated by the Acland family and others, was given in subsequent years. [33] [34] [35] [36]

The site is part of the North Exmoor Site of Special Scientific Interest (SSSI), part of the Dunkery & Horner Woods National Nature Reserve [37] and part of the Exmoor Coastal Heaths Special Area of Conservation. [38]

The hill is blanketed in heather, which gives it a deep purple colour during the summer. Ling and bell heather, gorse, sessile oak, ash, rowan, hazel, bracken, mosses, liverworts, lichens and ferns all grow on the hill or in surrounding woodland, as well as some unique whitebeam species. Exmoor ponies, red deer, pied flycatchers, wood warblers, lesser spotted woodpeckers, redstarts, dippers, snipe, skylarks and kestrels are some of the fauna to be found on or around the hill and in nearby Horner Woods, home to 14 of the 16 UK bat species and including barbastelle and Bechstein's bats. [35] [39]