Dunham Massey Hall, usually known simply as Dunham Massey, [1] is an English country house in the parish of Dunham Massey in the district of Trafford, [2] near Altrincham, Greater Manchester. It is now a National Trust property, open to the public. [1] During World War I it was the Stamford Military Hospital. [3]

Dunham Massey was built in the early 17th century by the Earls of Warrington, passing to the Earls of Stamford by inheritance; the family still live in part of the house. There were significant alterations, especially internally, at the start of the 20th century. [6] It has historic formal gardens and a deer park. The park and gardens are listed Grade II* on the Register of Historic Parks and Gardens. [7] It was formerly in the ancient parish of Bowdon, Cheshire. 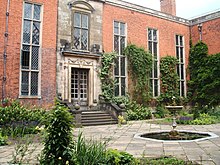 Internally, the service rooms such as the kitchen have changed little for over a century, and have been restored to reflect their use then. [6] The mansion's service court dates from c. 1721. [2] The clock tower is inscribed with that date, suggesting that was when improvements were made to the stables. In the 1730s, John Norris was brought in to redesign the whole mansion by the 2nd Earl of Warrington, with a design of brick façade accentuated by bays and a stone centerpiece. [8] The house was then acquired by the Grey family of Enville Hall via the marriage of Lady Mary Booth, daughter of the 2nd Earl, who oversaw to the remodeling of the landscape, work which was reputedly undertaken by Lancelot Capability Brown.

The chapel has oak panelling, pews and reredos. [2] The silk wallcoverings in the chapel were restored in 2015-16. [9]

The house remained occupied by the Grey family until the 7th Earl of Stamford’s marriage to Elizabeth (Bessie) King Billage at which stage the house and wider estates were abandoned for a time. The Earl at this time condemned the snobs of Cottonopolis (Manchester) because of their disrespectful attitude towards his wife Bessie and vowed never to set foot in Dunham Massey Hall again. He married Catherine Cox in August 1855 and although they spent private time at Dunham Massey Hall they never considered this to be their home. Catherine Cox was the second daughter of Henry and Jemima Cox, their first daughter Tamar gave birth to three illegitimate children and namely Sarah Letitia Cox and the niece of the Countess and who Catherine took under her wing, Sarah Letitia lived with her aunt from at least 1851 when the census was taken. The descendants of Sarah Letitia Cox and the relations of the Countess still occupy Enville Hall today. [10]

The double courtyard house is built of Flemish bond brick, stone dressings, and a roof of Westmorland and Welsh slate. [2] The external architecture is relatively plain, [6] and was even more so until the house was modified in 1905–1908 by Compton Hall, after its reoccupation by William Grey, 9th Earl of Stamford. Until this time, the southern front of the building had 11 three-storey bays; in order to make the building look more 17th-century in style, the third, fourth, eighth, and ninth bays were reduced to two stories with dormers, and a centrepiece of three bays was added, with columns each side of the central bay as well as stone pediments. [2]

The statue and sundial formerly at the front of house

A life-sized statue of an exoticised black man wearing only a skirt of feathers, in a kneeling position and holding a sundial above his head, was previously situated at the front of the house. It is believed to have originally been a personification of Africa, produced by the sculptor Andries Carpentière in c. 1735 after a figure by John van Nost for King William III's privy garden at Hampton Court. [11] In June 2020, after numerous calls were made for the removal of statues in Britain with links to the slave trade in the wake of the murder of George Floyd, the National Trust said that the decision had been made to move the statue. [12] [13]

A ward inside Dunham Massey Hall as reconstructed in 2015

During World War I, Penelope Grey, Countess of Stamford, wife of the 9th Earl of Stamford, made the stately home available to the Red Cross as a military hospital, becoming known as the Stamford Military Hospital from April 1917 to January 1919. It hosted 182 injured soldiers who had suffered injuries and needed medical care, but not life-threatening, ranging from gas poisoning to bullets in the brain. The hospital was run by Sister Catherine Bennett, and Lady Stamford's daughter, Lady Jane Grey (later Turnbull), [14] trained as a nurse at the hospital. [3] [15]

From 1 March 2014 until 11 November 2016, the main ward at Stamford Military Hospital (known as "Baghdad"), along with the operating theatre, nurses' station and the recreation room were recreated to commemorate the 100-year anniversary of the start of World War I, [3] along with actors playing the role of characters who worked, lived and recovered at the hospital. [15] [10]

The library, with the Grinling Gibbons carving

Dunham Massey contains one of the largest collections of Huguenot silver, largely collected by George Booth, 2nd Earl of Warrington. During his 64 years at Dunham Massey, he accumulated over 1000 pieces of silver. One sixth of the original plate remains at Dunham Massey, with much of the collection being dispersed by the Countess of Stamford and Warrington (who died in 1905), widow of George Grey, Earl of Stamford and Warrington (died 1883). The 10th Earl, Roger Grey, expended much money and effort in returning family heirlooms originally from Dunham Massey. [16]

There is a fine collection of oil paintings and watercolours. The relief wood-carving of the Crucifixion by Grinling Gibbons, which hangs in the Library, is the earliest known work by the 17th-century wood carver. It is on this piece of work he was working when he was discovered by John Evelyn in 1671. A group of paintings of the house and estate from the 1690s and 1750s are described by Simon Jenkins as "the most remarkable topographical survey of any country house and its grounds to remain in situ. These are in the Great Gallery, which also has an Allegory of Time by Guercino. [17]

The Carriage House, located south of the kitchen courtyard, is also Grade 1 listed. It has a clock turret, which displays a date of 1721. [18]

Also located south of the Hall are the stable buildings are also Grade 1 listed. They probably date from 1721, but the west side was extended in the 18th century. [19] The Stables Restaurant is located in the upstairs of the South Stables, with an ice cream parlour below.

Deer in front of the house

The gardens houses over 700 plant species, as well as 1,600 trees and shrubs, and it hosts the largest winter garden in Britain. [4] The Winter Garden has many snowdrops, daffodils and bluebells. [20] The 300 acre [4] deer park at Dunham Massey dates back to medieval times. [21]

The oldest surviving building on the Dunham Estate is the Mill. [21]