From Wikipedia
https://en.wikipedia.org/wiki/Draco_(constellation)
Constellation in the northern celestial hemisphere
This article is about the constellation. For other uses, see Draco (disambiguation).

Draco is a constellation in the far northern sky. Its name is Latin for dragon. It was one of the 48 constellations listed by the 2nd century astronomer Ptolemy, and remains one of the 88 modern constellations today. The north pole of the ecliptic is in Draco. [1] Draco is circumpolar (that is, never setting), and can be seen all year from northern latitudes. 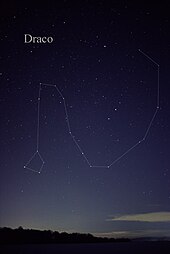 Thuban (α Draconis) was the northern pole star from 3942 BC, when it moved farther north than Theta Boötis, until 1793 BC. The Egyptian Pyramids were designed to have one side facing north, with an entrance passage geometrically aligned so that Thuban would be visible at night. [2] Due to the effects of precession, it will again be the pole star around the year AD 21000. It is a blue-white giant star of magnitude 3.7, 309 light-years from Earth. The traditional name of Alpha Draconis, Thuban, means "head of the serpent". [1]

There are three stars under magnitude 3 in Draco. The brighter of the three, and the brightest star in Draco, is Gamma Draconis, traditionally called Etamin or Eltanin. It is an orange giant star of magnitude 2.2, 148 light-years from Earth. The aberration of starlight was discovered in 1728 when James Bradley observed Gamma Draconis. Nearby Beta Draconis, traditionally called Rastaban, is a yellow giant star of magnitude 2.8, 362 light-years from Earth. Its name shares a meaning with Thuban, "head of the serpent". [1]Draco also features several interacting galaxies and galaxy clusters. One such massive cluster is Abell 2218, located at a distance of 3 billion light-years (redshift 0.171).

The constellation contains the star recently named Kepler-10, which has been confirmed to be orbited by Kepler-10b, the smallest rocky Earth-sized planet yet detected outside of the Solar System.

One of deep-sky objects in Draco is the Cat's Eye Nebula (NGC 6543), a planetary nebula approximately 3,000 light-years away that was discovered by English astronomer William Herschel in 1786. [4] It is 9th magnitude and was named for its appearance in the Hubble Space Telescope, though it appears as a fuzzy blue-green disk in an amateur telescope. [1] NGC 6543 has a very complex shape due to gravitational interactions between the components of the multiple star at its center, the progenitor of the nebula approximately 1,000 years ago. [6] It is located 9.6 arcminutes away from the north ecliptic pole to the west-northwest. It is also related to IC 4677, a nebula that appears as a bar 1.8 arcminutes to the west of the Cat's Eye nebula. In long-term exposures, IC 4677 appears as a portion of a ring surrounding the planetary nebula. [4]

There are several faint galaxies in Draco, one of which is the lenticular galaxy NGC 5866 (sometimes considered to be Messier Object 102) that bears its name to a small group that also includes the spiral galaxies NGC 5879 and NGC 5907. Another is the Draco Dwarf Galaxy, one of the least luminous galaxies with an absolute magnitude of −8.6 and a diameter of only about 3,500 light years, discovered by Albert G. Wilson of Lowell Observatory in 1954. Another dwarf galaxy found in this constellation is PGC 39058. 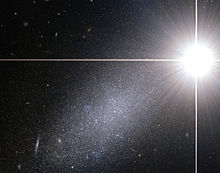 Draco also features several interacting galaxies and galaxy clusters. One such massive cluster is Abell 2218, located at a distance of 3 billion light-years ( redshift 0.171). It acts as a gravitational lens for even more distant background galaxies, allowing astronomers to study those galaxies as well as Abell 2218 itself; more specifically, the lensing effect allows astronomers to confirm the cluster's mass as determined by x-ray emissions. One of the most well-known interacting galaxies is Arp 188, also called the "Tadpole Galaxy". Named for its appearance, which features a "tail" of stars 280,000 light-years long, the Tadpole Galaxy is at a distance of 420 million light-years (redshift 0.0314). The tail of stars drawn off the Tadpole Galaxy appears blue because the gravitational interaction disturbed clouds of gas and sparked star formation. [6]

Q1634+706 is a quasar that holds the distinction of being the most distant object usually visible in an amateur telescope. At magnitude 14.4, it appears star-like, though it is at a distance of 12.9 billion light-years. The light of Q1634+706 has taken 8.6 billion years to reach Earth, a discrepancy attributable to the expansion of the universe. [4]

The Hercules–Corona Borealis Great Wall, possibly the largest known structure in the universe, covers a part of the southern region of Draco. 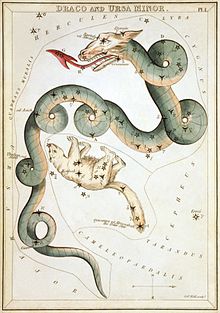 Draco coils around the north celestial pole, as depicted in Urania's Mirror, a set of constellation cards published in London c.1825

Draco is one of the 48 constellations listed in Ptolemy's Almagest (2nd century), adopted from the list by Eudoxus of Cnidus (4th century BC). [7] A dragon in Greek mythology that may have inspired the constellation's name is Ladon, the dragon who guarded the golden apples of the Hesperides. [8] Heracles killed Ladon during his 12 labors; he was tasked with stealing the golden apples. The constellation of Hercules is depicted near Draco. [1]

In Greco-Roman legend, Draco was a dragon killed by the goddess Minerva and tossed into the sky upon his defeat. The dragon was one of the Gigantes, who battled the Olympic gods for ten years. As Minerva threw the dragon, it became twisted on itself and froze at the cold North Celestial Pole before it could right itself. [8]

Sometimes, Draco is represented as the Titan son of Gaia, Typhon. [8]

Traditional Arabic astronomy does not depict a dragon in modern-day Draco, which is called the Mother Camels. Instead, two hyenas, represented by Eta Draconis and Zeta Draconis are seen attacking a baby camel (a dim star near Beta Draconis), which is protected by four female camels, represented by Beta Draconis, Gamma Draconis, Nu Draconis, and Xi Draconis. The nomads who own the camels are camped nearby, represented by a cooking tripod composed of Upsilon, Tau, and Sigma Draconis. [9] In some mythology, Draco had one hundred magnificent heads, guarded the golden apple tree, and was put in the sky as a constellation for protecting the apples with valor. The constellation has been subject to many more myths, but ones that are obscure.

The February Eta Draconids is a meteor shower that was discovered on February 4, 2011. Observers noted six meteors with a common radiant in a short period. Its parent is a previously unknown long-period comet. [10]

The main character in the 1996 film Dragonheart gets his name from this constellation. The film also reveals that Draco is actually a dragon heaven, where dragons go when their time in this world is complete, and if they have upheld the oath of an ancient dragon to guard mankind, with dragons otherwise fading into nothing upon their deaths. At the conclusion of the film, Draco, the last dragon, ascends into the constellation after he sacrifices himself to destroy an evil king that he had saved years ago. This is further elaborated on in the sequel and prequel films that follow.

The Dragon Variation of the Sicilian Defense chess opening was also named after the constellation by Russian chess master Fyodor Dus-Chotimirsky. [11]

The Beyblade top Lightning L-Drago 100HF and its evolutions Meteo L-Drago LW105LF and L-Drago Destructor F:S are inspired by/based on the Draco constellation. They all feature three dragon heads chasing each other in a counter-clockwise motion, possibly referencing Ladon's multiple heads. Omega Dragonis 85XF is another bey that is also inspired by/based on the Draco constellation.[ citation needed]

Draco Malfoy, an antagonist in the Harry Potter series, is named after the constellation as well. [12]