Dr. Jekyll and Mr. Hyde is a 1920 American silent horror film produced by Famous Players-Lasky and released through Paramount/Artcraft. The film, which stars John Barrymore, is an adaptation of the 1886 novella Strange Case of Dr Jekyll and Mr Hyde by Robert Louis Stevenson. [4] John S. Robertson directed the production, and Clara Beranger wrote the screenplay, based on the 1887 stage play by Thomas Russell Sullivan that in turn was based on the novel. [1] [4]

The story, set in late Victorian London, portrays the tragic consequences of a doctor's experiments in separating the dual personalities he thinks define all humans: one good, the other evil. [5] The film is now in the public domain. [6]

Henry Jekyll ( John Barrymore) is a doctor of medicine living and working in London in the late 1880s. When he is not treating the poor in his free clinic, he is in his laboratory experimenting. Sir George Carew ( Brandon Hurst), the father of Jekyll’s fiancé Millicent ( Martha Mansfield), is suspicious of the young doctor’s intentions and often irritated by his tardiness and highmindedness. "No man", Carew observes, "could be as good as he looks." [7] Following dinner one evening, Carew taunts his prospective son-in-law in front of their mutual friends and debates with him about the causes and effects of a person's personality, insisting that every man is fundamentally composed of two "selves" who are in continual conflict. "A man cannot destroy the savage in him by denying its impulses", instructs Carew. "The only way to get rid of a temptation is to yield to it." 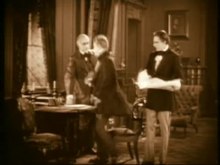 Reflecting on Sir George's comments, Jekyll begins his research and experiments into separating the two basic natures of man, the good and the evil. Finally, after much trial and error, he develops a potion that rapidly transforms him into a hideous, evil counterpart, a man he refers to as Edward Hyde. When in the form and consciousness of Hyde, Jekyll is not recognizable as himself, so to facilitate his bad side's access to his own home and adjacent laboratory, the doctor informs his trusty servant Poole (George Stevens) that Mr. Hyde is to have "full authority and liberty" at the residence.

Utilizing his potion, Jekyll literally begins to live a double life: the compassionate and gentlemanly doctor by day, and the lustful, hunchbacked "creature" who ventures out largely at night. As Hyde, he lurks about the seediest parts of London, frequenting opium dens, bars, and music halls—anywhere he can satisfy his "dark indulgences". He rents a small furnished room in the area and brings Gina ( Nita Naldi), a young woman and exotic dancer, to live with him. Soon, however, Hyde tires of her company and forces her to leave.

Mr. Hyde with the owner of the music hall ( Louis Wolheim) where Gina dances

Although Jekyll has developed a counter-potion that transforms Hyde back to the doctor’s original appearance and character, each time he takes the potion to become Hyde, the beast becomes increasingly more vile and physically more hideous. Meanwhile, Millicent worries about the absence of her fiancé, so Sir George calls on Jekyll, but the young man is not at home. Sir George then encounters Hyde in a nearby street, where the brute has just knocked a small boy to the ground and injured him. To make recompense for his actions, he goes and gets a check which he returns to the boy's father. Carew notices that the check has been signed by Dr. Jekyll. He confronts Poole, who tells him the story of Edward Hyde.

Hyde now returns to the lab; drinks the counter-potion and changes once again into his original form. Sir George finds the transformed Jekyll in the lab and demands to know about his relationship with Mr. Hyde, threatening to break off his daughter’s engagement to the doctor if he does not answer his questions. The threat enrages Jekyll, so much so that the stress itself triggers his retransformation to Hyde. Horrified in witnessing the change, Sir George flees out of the lab, but Hyde catches him in the courtyard and beats him to death with his stout, club-like walking stick. Hyde then runs to his apartment and destroys any evidence there that might link him to Jekyll. After barely avoiding the police, the creature returns to the lab, where he drinks the counter-potion and reverts to Jekyll.

In the ensuing days, while Millicent mourns over her father’s murder, Jekyll is tormented by the thoughts of his misdeeds as Hyde. Soon, the ingredient needed to make the counter-potion is depleted and cannot be found in all of London. Jekyll therefore confines himself to his locked lab, fearing he might become Hyde at any moment. Millicent finally goes to see him, but as she knocks on the lab's door, he begins transforming into Hyde. Before he opens the door, Jekyll consumes poison in a ring he wears, one that he had taken from Gina. Now fully transformed into Hyde, he lets Millicent in, locks the door, and grabs her in his arms. Suddenly, he starts convulsing. Millicent runs from the lab and her shouts for help attract Poole, Jekyll's longtime friend Dr. Richard Lanyon, and another friend, John Utterson. Lanyon enters the lab and finds Hyde dead, sitting in a chair. To his astonishment, he watches the creature transform into Jekyll. Discerning that his friend had committed suicide, Lanyon calls the others into the lab, where he informs them that Hyde has killed Jekyll. As the film ends, Millicent is grieving next to the body of Jekyll. 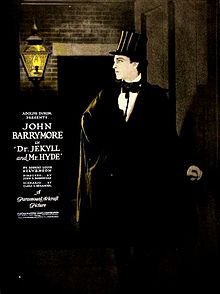 In 1920, film critics in the trade media and in fan-based publications generally gave high marks to Dr. Jekyll and Mr. Hyde and, not surprisingly, focused chiefly on John Barrymore. The popular trade paper Variety described the production as a "fine and dignified presentation" with an "excellent" performance by Barrymore despite what the paper viewed as the absurd nature of the plot:

The story itself is ridiculous, judged by modern standards, but that doesn't alter its value as a medium for Mr. Barrymore...As the handsome young Dr. Jekyll his natural beauty of form and feature stand him in good stead and he offers a marvelous depiction of bestiality in the transformed personality of "Mr. Hyde." Yet he was always Jack Barrymore, which is the most adverse comment that could be made upon the production.... [13]

In the weeks following the release of Dr. Jekyll and Mr. Hyde in March 1920, media reports about the box-office receipts being generated by the film and the exorbitant prices being spent by " movie palaces" to rent it attest to the production's commercial success. On April 2, for example, Variety reported that the Rivoli Theatre, a prestigious entertainment venue in New York City, was already earning "enormous takings" from its screenings of the film. [14] [15] Variety also informed its readers that the Rivoli's management had paid $10,000 to the film's distributor just to rent the picture, which it noted was "probably a record price for a straight rental anywhere in the world". [14]

With regard to broader public reaction to Dr. Jekyll and Mr. Hyde in 1920, fan-based publications and individual moviegoers expressed more mixed reactions to the film than critics in entertainment trade papers. [16] Some of those reviewers, like the title characters in the film, were "split", harboring both decidedly positive and negative opinions about the production. [16] Photoplay, a widely read New York-based monthly, provides one example of such mixed reactions. In the magazine's June 1920 issue, critic Burns Mantle describes two of his friends' diametric responses to the picture. One friend praised it as "a perfect sample" of filmmaking, destined to be a "classic" in cinematic history; the other friend was appalled by it. As to his latter friend, Mantle adds that she "insists as strenuously that 'Dr. Jekyll and Mr. Hyde' gave her a most terrific attack of the blues from which she has yet to recover, nor expects to ever fully recover." [16] Mantle's own feelings about the much-anticipated release were not so clear-cut:

My own reaction to this cinemagraphic tour de force strikes somewhere between those two [friends]. I left the picture cold, not to say clammy, but eager to sing the praises of J. Barrymore...by which he reaches the peak of his screen achievements. Eager to also declare it to be the finest bit of directing John Stewart Robertson has ever done...and a job that places him with the first half dozen intelligent directors in the field. But I felt a lot like my other friend who would keep her children away from it and suffer nary a pang of disappointment if I were told I should never look upon its likes again. Frankly I do not care for horrors, either on screen or stage. [16]

Barrymore in full makeup as the "ghastly" and evil Mr. Hyde

Frederick James Smith, the "Celluloid Critic" for Motion Picture Classic, another major fan publication, considered Dr. Jekyll and Mr. Hyde "a finely workmanlike piece of screencraft". [17] He did, though, caution his readers about Barrymore's appearance as Jekyll's inner beast. "His Hyde", Smith observed, "is a terrible being, with the most ghastly make-up we recall ever seeing in the films." [17] In fact, audience exposure to Barrymore's Hyde became a point of concern expressed in some reviews, with his screen presence threatening the mental and even physical health of the public, especially for children exposed to the actor's "ghoulish" character and the film’s possible "pre-natal influences" on expectant mothers. [16] [17]

Whatever reservations or warnings that film critics may have expressed about Dr. Jekyll and Mr. Hyde, they did not deter throngs of moviegoers in 1920 from seeing what Photoplay predicted would "easily become the most talked of picture of the time." [16] The magazine illustrated that popularity when it reported, "A door and two windows were broken by the crowds that tried to see it on its first showing in New York". [16]

In 2014, American film critic and historian Leonard Maltin gave this version of Dr. Jekyll and Mr. Hyde three stars on a four-star rating scale. Maltin also complimented Barrymore's performances as both Jekyll and Hyde, as well as the film's overall production, describing it as "well made". [18]

The film is recognized by American Film Institute in these lists: