From Wikipedia
https://en.wikipedia.org/wiki/Domažlice
Not to be confused with Domaželice.
Town in Plzeň, Czech Republic

listen); German: Taus) is a town in the Plzeň Region of the Czech Republic. It has about 11,000 inhabitants. The town centre is well preserved and is protected by law as an urban monument reservation.

The first written mention of Domažlice settlement is in a deed of Boleslaus II from 993. Purpose of its existence was related to the Bohemian- Bavarian border and important trade route to Regensburg. [2]

Near that settlement, a fortified royal town of Domažlice was founded by Ottokar II of Bohemia in 1265. [3] The town included a royal castle. The border with Bavaria was protected by border guards recruited from Chodové (Slavic free farmers) who settled in the vicinity of Domažlice. [2]

The town was mortgaged to Bavaria in 1331, lasting until 1419 (with some interruptions). Under Hussite rule, German citizens were expelled from the town, and since then, the population has been predominantly Czech. In 1431, Prokop the Great defeated the crusaders of the Holy Roman Empire in the Battle of Domažlice. The 15th and 16th century saw Domažlice change hands frequently, but its importance diminished following the end of the Thirty Years' War. It was not until 1770 that it recovered, largely due to innovations in the textile industry.

Within the context of the Czech National Revival, Domažlice became a central place during the 19th century. At the time, it was the most western ethnic Czech town, very close to the border with the Kingdom of Bavaria. In the town, a pilgrimage took place on August 13, 1939, which developed into a large Czech protest demonstration against the German occupation and control of the ethnic Czech Protectorate of Bohemia and Moravia. The German population was expelled in 1945 according to the Potsdam Agreement.

In 2005 a mass grave was discovered on the outskirts of the town, holding 54 Germans, mainly members of the local SA, executed by the Czech resistance after the end of the war, around May 8, 1945.

Dolní Gate on the Míru Square 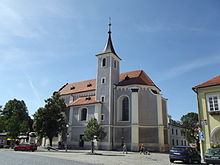 Church of the Assumption of the Virgin Mary

The historical town core is well preserved and includes many monuments and valuable buildings:

See also: List of twin towns and sister cities in the Czech Republic

Domažlice is twinned with: [6]