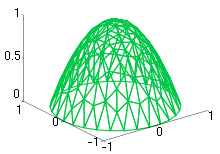 A solution to a discretized partial differential equation, obtained with the finite element method.

In applied mathematics, discretization is the process of transferring continuous functions, models, variables, and equations into discrete counterparts. This process is usually carried out as a first step toward making them suitable for numerical evaluation and implementation on digital computers. Dichotomization is the special case of discretization in which the number of discrete classes is 2, which can approximate a continuous variable as a binary variable (creating a dichotomy for modeling purposes, as in binary classification).

Whenever continuous data is discretized, there is always some amount of discretization error. The goal is to reduce the amount to a level considered negligible for the modeling purposes at hand.

Mathematical methods relating to discretization include the Euler–Maruyama method and the zero-order hold.

Discretization is also concerned with the transformation of continuous differential equations into discrete difference equations, suitable for numerical computing.

can be discretized, assuming zero-order hold for the input u and continuous integration for the noise v, to

is the sample time, although

is the transposed matrix of

A clever trick to compute Ad and Bd in one step is by utilizing the following property: [2]:p. 215

are the discretized state-space matrices.

is a bit trickier due to the matrix exponential integral. It can, however, be computed by first constructing a matrix, and computing the exponential of it [3]

Starting with the continuous model

we know that the matrix exponential is

and by premultiplying the model we get

which we recognize as

which is an analytical solution to the continuous model.

Now we want to discretise the above expression. We assume that u is constant during each timestep.

We recognize the bracketed expression as

, and the second term can be simplified by substituting with the function

. We also assume that

is constant during the integral, which in turn yields

which is an exact solution to the discretization problem.

is singular, the latter expression can still be used by replacing

by its Taylor expansion,

which is the form used in practice.

Exact discretization may sometimes be intractable due to the heavy matrix exponential and integral operations involved. It is much easier to calculate an approximate discrete model, based on that for small timesteps

. The approximate solution then becomes:

, otherwise known as the backward Euler method and

In statistics and machine learning, discretization refers to the process of converting continuous features or variables to discretized or nominal features. This can be useful when creating probability mass functions.

In generalized functions theory, discretization arises as a particular case of the Convolution Theorem on tempered distributions

is the Dirac comb,

or any other compactly supported function),

is a smooth, slowly growing ordinary function (e.g. the function that is constantly

or any other band-limited function) and

which are not smooth can be made smooth using a mollifier prior to discretization.

As an example, discretization of the function that is constantly

which, interpreted as the coefficients of a linear combination of Dirac delta functions, forms a Dirac comb. If additionally truncation is applied, one obtains finite sequences, e.g.

. They are discrete in both, time and frequency.