From Wikipedia
https://en.wikipedia.org/wiki/Dionysius_of_Halicarnassus
Ancient Greek historian (c. 60 BC – after 7 BC)

Dionysius of Halicarnassus ( Ancient Greek: Διονύσιος Ἀλεξάνδρου Ἁλικαρνασσεύς, Dionúsios Alexándrou Halikarnasseús, ''Dionysios (son of Alexandros) of Halikarnassos''; c.  60 BC – after 7 BC) was a Greek historian and teacher of rhetoric, who flourished during the reign of Augustus Caesar. His literary style was atticistic – imitating Classical Attic Greek in its prime.

Dionysius' opinion of the necessity of a promotion of paideia within education, from true knowledge of classical sources, endured for centuries in a form integral to the identity of the Greek elite. [1]

He was a Halicarnassian. [1] At some time after the end of the civil wars he moved to Rome, and spent twenty-two years studying Latin and literature and preparing materials for his history. [2] During this period, he gave lessons in rhetoric, and enjoyed the society of many distinguished men. The date of his death is unknown. [3] In the 19th century, it was commonly supposed that he was the ancestor of Aelius Dionysius of Halicarnassus. [4]

His major work, entitled Rhōmaïkḕ Arkhaiología (Ῥωμαϊκὴ Ἀρχαιολογία, ''Roman Antiquities''), narrates the history of Rome from the mythical period to the beginning of the First Punic War in twenty books, of which the first nine remain extant while the remaining books only exist as fragments, [2] in the excerpts of the Roman emperor Constantine Porphyrogenitus and an epitome discovered by Angelo Mai in a Milan manuscript. Dionysius is the first major historian of early Roman history whose work is now extant. Several other ancient historians who wrote of this period, almost certainly used Dionysius as a source for their material. The works of Appian, Plutarch and Livy all describe similar people and events of Early Rome as Dionysius.[ citation needed]

In the preamble to Book I, Dionysius states that the Greek people lack basic information on Roman history, a deficiency he hopes to fix with the present work.

Book I   (1300?)–753 BC
Mythic early history of Italy and its people. Book I also narrates the history of Aeneas and his progeny, ending with the death of Remus.

Book II   753–673 BC
The Roman monarchy's first two Kings, Romulus and Numa Pompilius. Romulus formulates customs and laws for Rome. Sabine war- as in subsequent parts of the history, this early conflict is described as involving numerous categories of officer, thousands of infantry, and cavalry combatants. This is highly unlikely, but is a common anachronism found in ancient historians.

Book IV   575–509 BC
Last of the Roman kings and end of the monarchy with overthrow of Lucius Tarquinius Superbus.

Book VI   496–493 BC
Includes the first instance of Plebeian secession.

Book VII   492–490 BC
This book describes at length the background leading to the Roman Coriolanus’ trial, ending in his exile. Much of the book is a debate between supporters of the oligarchy and the plebeians.

Book IX   481–462 BC
Various military campaigns of mixed fortune in foreign matters. Domestically the plebeians and patricians argue and the conflict of the orders continues. The number of Tribunes is raised from 5 to 10. Book IX ends with the first two years of the decemvirate and the creation of the first Roman Law Tables.

Note
The last ten books are fragmentary, based on excerpts from medieval Byzantine history compilations. Book XI is mostly extant at around 50 pages (Aeterna Press, 2015 edition), while the remaining books, have only 12–14 pages per book.

Book XIX
The beginnings of conflicts between Rome and the warlord Pyrrhus. The southern Italy city of Tarentum has problems with Rome, who have recently expanded into southern Italy. Tarentum invites Pyrrhus as muscle to protect them.

Because his prime objective was to reconcile the Greeks to Roman rule, Dionysius focused on the good qualities of their conquerors, and also argued that – based on sources ancient in his own time – the Romans were genuine descendants of the older Greeks. [5] [6] According to him, history is philosophy teaching by examples, and this idea he has carried out from the point of view of a Greek rhetorician. But he carefully consulted the best authorities, and his work and that of Livy are the only connected and detailed extant accounts of early Roman history. [7]: 240–241

Dionysius was also the author of several rhetorical treatises, in which he shows that he had thoroughly studied the best Attic models:

The last two treatises are supplemented by letters to Gn. Pompeius and Ammaeus (two, one of which is about Thucydides). [3]

Dionysian imitatio is the literary method of imitation as formulated by Dionysius, who conceived it as the rhetorical practice of emulating, adapting, reworking, and enriching a source text by an earlier author. [8] [9] It shows marked similarities with Quintilian’s view of imitation, and both may derive from a common source. [10]

Dionysius' concept marked a significant departure from the concept of mimesis formulated by Aristotle in the 4th century BC, which was only concerned with "imitation of nature" and not "imitation of other authors." [8] Latin orators and rhetoricians adopted Dionysius' method of imitatio and discarded Aristotle's mimesis. [8]

History in the Roman Antiquities, and the Foundation Myth

Dionysius carried out extensive research for his Roman history, selecting among authorities, and preserving (for example) details of the Servian Census. [7]: 239

His first two books present a unified account of the supposed Greek origin for Rome, merging a variety of sources into a firm narrative: his success, however, was at the expense of concealing the primitive Roman actuality (as revealed by archaeology). [7]: 241  Along with Livy, [11] Dionysius is thus one of the primary sources for the accounts of the Roman foundation myth, and that of Romulus and Remus, and was relied on in the later publications of Plutarch, for example. He writes extensively on the myth, sometimes attributing direct quotations to its figures. The myth spans the first 2 volumes of his Roman Antiquities, beginning with Book I chapter 73 and concluding in Book II chapter 56.[ citation needed]

Origins and survival in the wild

Dionysius claims that the twins, Romulus and Remus, were born to a vestal named Ilia Silvia (sometimes called Rea), descended from Aeneas of Troy and the daughter of King Latinus of the Original Latin tribes, thus linking Rome to Trojans and Latins both. Dionysius lays out the different accounts of her pregnancy and the twins' conception, but declines to choose one over the others.

Citing Fabius, Cincius, Porcius Cato, and Piso, Dionysius recounts the most common tale, whereby the twins are to be tossed into the Tiber; are left at the site of the ficus Ruminalis; and rescued by a she-wolf who nurses them in front of her lair (the Lupercal). Dionysius relates an alternate, "non-fantastical" version of Romulus and Remus' birth, survival and youth. In this version, Numitor managed to switch the twins at birth with two other infants. The twins were delivered by their grandfather to Faustulus to be fostered by him and his wife, Laurentia, a former prostitute. According to Plutarch, lupa(Latin for "wolf") was a common term for members of her profession and this gave rise to the she-wolf legend.

Education and Foundation of Rome

The twins receive a proper education in the city of Gabii, before eventually winning control of the area around where Rome would be founded. Dispute over the particular hill upon which Rome should be built, the Palatine Hill or the Aventine Hill for its strategic advantages saw the brothers fall out and Remus killed.

Before construction on the city began Romulus made sacrifices and received good omens, and he then ordered the populace to ritually atone for their guilt. The city's fortifications were first and then housing for the populace. He assembled the people and gave them the choice as to what type of government they wanted - monarchy, democracy, or oligarchy - for its constitution. [12] After his address, which extolled bravery in war abroad and moderation at home, and in which Romulus denied any need to remain in power, the people decided to remain a kingdom and asked him to remain its king. Before accepting he looked for a sign of the approval of the gods. He prayed and witnessed an auspicious lightning bolt, after which he declared that no king shall take the throne without receiving approval from the gods.

Dionysus then provided a detailed account of the ‘Romulus’ constitution, most probably based on the work of Terentius Varro. [13] Romulus supposedly divides Rome into 3 tribes, each with a Tribune in charge. Each tribe was divided into 10 Curia, and each of those into smaller units. He divided the kingdoms land holdings between them, and Dionysus alone among our authorities insists that this was done in equal lots. [14] The Patrician class was separated from the Plebeian class; while each curiae was responsible for providing soldiers in the event of war. 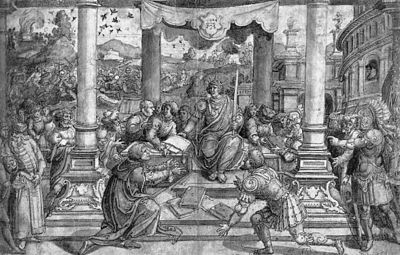 A system of patronage (clientela), a senate (attributed by Dionysius to Greek influence) and a personal bodyguard of 300 of the strongest and fittest among the nobles were also established: the latter, the celeres, were so-named either for their quickness, or, according to Valerius Antias, for their commander. [15]

A Separation of power,[14.1-3] and measures to increase manpower,[15-17] were also instituted, as were Rome's religious customs and practices[18-23], and a variety of legal measures praised by Dionysus.

Again, Dionysius thoroughly describes the laws of other nations before contrasting the approach of Romulus and lauding his work. The Roman law governing marriage is, according to his Antiquities, an elegant yet simple improvement over that of other nations, most of which he harshly derides. By declaring that wives would share equally in the possessions and conduct of their husband, Romulus promoted virtue in the former and deterred mistreatment by the latter. Wives could inherit upon their husband's death. A wife's adultery was a serious crime, however, drunkenness could be a mitigating factor in determining the appropriate punishment. Because of his laws, Dionysius claims that not a single Roman couple divorced over the following five centuries.

Romulus' laws governing parental rights, in particular, those that allow fathers to maintain power over their adult children were also considered an improvement over those of others; while Dionysius further approved of how, under the laws of Romulus, native-born free Romans were limited to two forms of employment: farming and the army. All other occupations were filled by slaves or non-Roman labor.

Romulus used the trappings of his office to encourage compliance with the law. His court was imposing and filled with loyal soldiers and he was always accompanied by the 12 lictors appointed to be his attendants.

Sabine women, and death of Romulus 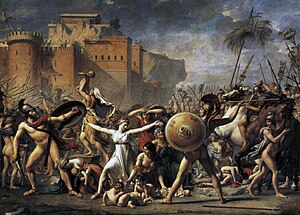 The Intervention of the Sabine Women, by Jacques-Louis David, 1799

Following his institutional account, Dionysus described the famous abducting of the Sabine women, stressing particularly how they were to be married according to their own Sabine customs, [16] and suggesting thereby that the abduction was a pretext for alliance with the Sabines. [17] In his narrative, however, the cities of Caecina, Crustumerium, and Antemnae petition for Tatius, king of the Sabines to lead them to war; and it is only after the famous intervention of the Sabine women that the nations agreed to become a single kingdom under the joint rule of Romulus and Tatius, both declared Quirites.

After the death of Tatius, however, Romulus became more dictatorial, until he met his end, either through actions divine or earthly.