In mathematics, the difference of two squares is a squared (multiplied by itself) number subtracted from another squared number. Every difference of squares may be factored according to the identity

The proof of the factorization identity is straightforward. Starting from the left-hand side, apply the distributive law to get

By the commutative law, the middle two terms cancel:

The resulting identity is one of the most commonly used in mathematics. Among many uses, it gives a simple proof of the AM–GM inequality in two variables.

The proof holds in any commutative ring.

Conversely, if this identity holds in a ring R for all pairs of elements a and b, then R is commutative. To see this, apply the distributive law to the right-hand side of the equation and get

For this to be equal to

for all pairs a, b, so R is commutative. 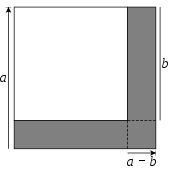 . The area of the shaded part can be found by adding the areas of the two rectangles;

, which can be factorized to

Another geometric proof proceeds as follows: We start with the figure shown in the first diagram below, a large square with a smaller square removed from it. The side of the entire square is a, and the side of the small removed square is b. The area of the shaded region is

. A cut is made, splitting the region into two rectangular pieces, as shown in the second diagram. The larger piece, at the top, has width a and height a-b. The smaller piece, at the bottom, has width a-b and height b. Now the smaller piece can be detached, rotated, and placed to the right of the larger piece. In this new arrangement, shown in the last diagram below, the two pieces together form a rectangle, whose width is

and whose height is

. This rectangle's area is

Factorization of polynomials and simplification of expressions

can be factored as follows:

As a second example, the first two terms of

can be factored as

Moreover, this formula can also be used for simplifying expressions:

For example, the complex roots of

can be found using difference of two squares:

Therefore, the linear factors are

Since the two factors found by this method are complex conjugates, we can use this in reverse as a method of multiplying a complex number to get a real number. This is used to get real denominators in complex fractions. [1]

The difference of two squares can also be used in the rationalising of irrational denominators. [2] This is a method for removing surds from expressions (or at least moving them), applying to division by some combinations involving square roots.

For example: The denominator of

can be rationalised as follows:

has been rationalised to

Using the difference of two squares,

can be restated as

The difference of two consecutive perfect squares is the sum of the two bases n and n+1. This can be seen as follows:

Several algorithms in number theory and cryptography use differences of squares to find factors of integers and detect composite numbers. A simple example is the Fermat factorization method, which considers the sequence of numbers

is a (potentially non-trivial) factorization of

This trick can be generalized as follows. If

is composite with non-trivial factors

. This forms the basis of several factorization algorithms (such as the quadratic sieve) and can be combined with the Fermat primality test to give the stronger Miller–Rabin primality test. 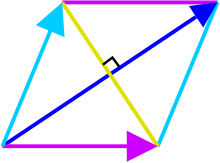 The identity also holds in inner product spaces over the field of real numbers, such as for dot product of Euclidean vectors:

The proof is identical. By the way, assuming that a and b have equal norms (which means that their dot squares are equal), it demonstrates analytically the fact that two diagonals of a rhombus are perpendicular. This follows from the left side of the equation being equal to zero, requiring the right side to equal zero as well, and so the vector sum of a + b (the long diagonal of the rhombus) dotted with the vector difference a - b (the short diagonal of the rhombus) must equal zero, which indicates the diagonals are perpendicular. 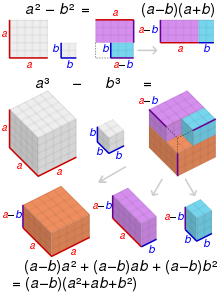 Visual proof of the differences between two squares and two cubes

If a and b are two elements of a commutative ring R, then

Historically, the Babylonians used the difference of two squares to calculate multiplications. [3]