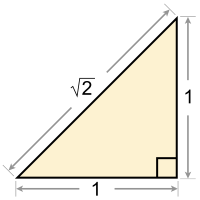 Informally, a definable real number is a real number that can be uniquely specified by its description. The description may be expressed as a construction or as a formula of a formal language. For example, the positive square root of 2,

, can be defined as the unique positive solution to the equation

, and it can be constructed with a compass and straightedge.

A real number r is called a real algebraic number if there is a polynomial p(x), with only integer coefficients, so that r is a root of p, that is, p(r)=0. Each real algebraic number can be defined individually using the order relation on the reals. For example, if a polynomial q(x) has 5 roots, the third one can be defined as the unique r such that q(r) = 0 and such that there are two distinct numbers less than r for which q is zero.

A real number is a computable number if there is an algorithm that, given a natural number n, produces a decimal expansion for the number accurate to n decimal places. This notion was introduced by Alan Turing in 1936. [1]

Definability in models of ZFC

This argument becomes more problematic if it is applied to class models of ZFC, such as the von Neumann universe.[ citation needed] The argument that applies to set models cannot be directly generalized to class models in ZFC because the property "the real number x is definable over the class model N" cannot be expressed as a formula of ZFC. Similarly, the question of whether the von Neumann universe contains real numbers that it cannot define cannot be expressed as a sentence in the language of ZFC. Moreover, there are countable models of ZFC in which all real numbers, all sets of real numbers, functions on the reals, etc. are definable. [3]