Darjeeling District is the northernmost district of the state of West Bengal in eastern India in the foothills of the Himalayas. The district is famous for its hill station Darjeeling tea. Darjeeling is the district headquarters.

Geographically, the district can be divided into two broad divisions: the hills and the plains. The entire hilly region of the district comes under the Gorkhaland Territorial Administration, a semi-autonomous administrative body under the state government of West Bengal. This body covers the three hill subdivisions of Darjeeling, Kurseong and Mirik and the district of Kalimpong. The foothills of Darjeeling Himalayas, which comes under the Siliguri subdivision, is known as the Terai. The district is bounded on the north by Sikkim, on the south by Kishanganj district of Bihar state, on the southeast by Panchagarh district of Bangladesh, on the east by Kalimpong and Jalpaiguri districts, and on the west by Nepal. Darjeeling district has a length from north to south of 18 miles (29 km) and a breadth from east to west of 16 miles (26 km). As of 2011, it was the second least populous district of West Bengal (out of 19), after Dakshin Dinajpur. [2]

The name Darjeeling comes from the Tibetan words, Dorje (thunderbolt) and Ling (place or land), meaning the land of the thunderbolt. The history of Darjeeling district is linked to that of the Sikkim, East India Company, Nepal and Bhutan.

Most of Darjeeling formed a part of dominions of the Chogyal of Sikkim, who had been engaged in an unsuccessful warfare against the Gorkhas of Nepal. From 1780, the Gorkhas made several attempts to capture the entire region of Darjeeling. By the beginning of the 19th century, they had overrun Sikkim as far eastward as the Teesta River and had conquered and annexed the entire Terai.

In November 1864, the Treaty of Sinchula was executed in which the Bhutan Dooars with the passes leading into the hills and Kalimpong were ceded to the British by Bhutan. The Darjeeling district can be said to have assumed its present shape and size in 1866 with an area of 1234 sq. miles.

Before 1861 and from 1870 to 1874, Darjeeling District was a "Non-Regulated Area" (where acts and regulations of the British Raj did not automatically apply in the district in line with rest of the country, unless specifically extended). From 1862 to 1870, it was considered a "Regulated Area". The phrase "Non-Regulated Area" was changed to "Scheduled District" in 1874 and again to "Backward Tracts" in 1919. The status was known as "Partially Excluded Area" from 1935 until the independence of India.

On 14 February 2017, Kalimpong district was carved out of Darjeeling district.

During the 1980s, the Gorkha National Liberation Front led an intensive and often violent campaign for the creation of a separate Gorkhaland state within India, across the Nepali-speaking areas in northern West Bengal. The movement reached its peak around 1986–1988 but ended with the establishment of the Darjeeling Gorkha Hill Council in 1988.

The hill areas of Darjeeling enjoyed some measure of autonomy under the Darjeeling Gorkha Hill Council. However, the demand for full statehood within India has emerged once again, with the Gorkha Janmukti Morcha as its chief proponent. [3] The Gorkhaland Territorial Administration replaced the DGHC in August 2012 after the GJM signed an agreement with the government. [4] 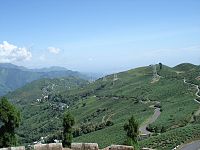 A tea garden in Darjeeling.

The Himalayas serve as the source of natural resources for the population residing in the hills as well as in the plains. As human population expands in the hills, forests are being depleted for the extension of agricultural lands, introduction of new settlements, roadways, etc. The growing changes coming in the wake of urbanisation and industrialisation leave deep impressions on the hill ecosystem. 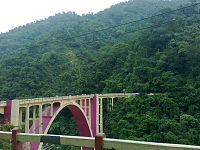 The economy of Darjeeling hill area depends on tea production, horticulture, agriculture, forestry and tourism. The major portions of the forests are today found at elevations of 2,000 metres (6,600 ft) and above. The area in between 1,000 and 2,000 metres (3,300 and 6,600 ft) is cleared either for tea plantation or cultivation. About 30 percent of the forest covers found in the lower hills are deciduous. Evergreen forest constitutes only about 6 percent of the total forest coverage. Shorea robusta remains the most prominent species of tropical moist deciduous forest along with heavy undergrowth.

Teesta, Rangeet, Mechi, Balason, Mahananda and Rammam are the important rivers of the district. 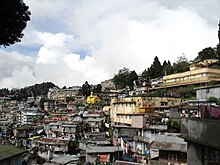 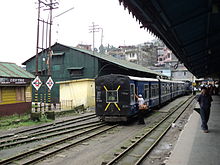 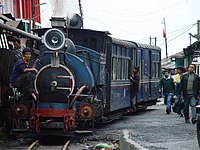 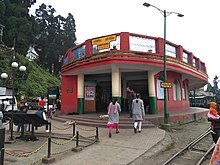 Darjeeling railway station an outside view

The original inhabitants of the Darjeeling Hills were the Lepchas or Rongpa (the ravine people, as they prefer themselves to be known as). The Kirati Limbus are another ancient inhabitants of this district. Darjeeling District is inhabited By Many Communities: Like Lepcha, Limbu, Rai, Sherpa, Bhutia, Tamang, Gurung, Magar, Newar, Sunuwar, Yakkha, Thami, Chettri, Bahun, Kami , Damai etc There is also a sizeable population of Tibetans who arrived from Tibet since the 1950s. In the plains, the Bengalis are in majority along with several communities like the Biharis, Gorkhas, Marwaris and the Adivasi people originally from Chotanagpur and Santhal Parganas.

Bengali is the official language of the district population with Nepali declared as co-official only in Darjeeling and Kurseong subdivisions. [12] Nepali, Hindi, Bengali and English are the prevailing languages of Darjeeling. [13] Nepali (which is spoken by more than 70% of the population in Darjeeling, Kurseong and Mirik subdivisions) is the dominant language in the hills. [11] Bengali is the language of the Siliguri subdivision. [11] Although most indigenous hill-tribes have shifted to Nepali as their mother tongue, small numbers still speak their original languages like Lepcha, Limbu, Rai, Sherpa and Tamang. [14] [15]

Hinduism is the dominant religion in Darjeeling district with 72% followers. Buddhism is practiced by 11% of the population, followed by around 8% Christians and 5% Muslims. [16]