From Wikipedia
https://en.wikipedia.org/wiki/Dari
Dialect of the Persian language spoken in Afghanistan
For other uses, see Dari (disambiguation).

Dari (دری, Darī, [dæɾiː]), or Dari Persian (فارسی دری, Fārsī-e Darī), is a political term used for the various dialects of the Persian language spoken in Afghanistan. [4] [5] Dari is the term officially recognised and promoted since 1964 by the Afghan government for the Persian language, [6] [7] hence it is known as Afghan Persian or Eastern Persian in many Western sources. [8] [9] [10] [11] As Professor Nile Green remarks "the impulses behind renaming of Afghan Persian as Dari were more nationalistic than linguistic" in order to create an Afghan state narrative. [12] Persian in Afghanistan is generally called Fārsi (فارسی) by Persian-speakers and Pārsi (پارسی) by ethnic Pashtuns. Apart from a few basics of vocabulary, there is little difference between formal written Persian of Afghanistan and Iran. The term "Dari" is officially used for the characteristic spoken Persian of Afghanistan, but is best restricted to formal spoken registers. Persian-speakers in Afghanistan contend that the term "Dari" has been forced on them by the dominant Pashtun ethnic group as an attempt to distance Afghanistan from its cultural, linguistic, and historical ties to the rest of the Persian-speaking world, which includes Iran, Tajikistan and parts of Uzbekistan. [13] [14]

Dari is a name given to the New Persian language since the 10th century, widely used in Arabic (compare Al-Estakhri, Al-Muqaddasi and Ibn Hawqal) and Persian texts. [23]

Since 1964, it has been the official name in Afghanistan for the Persian spoken there. In Afghanistan, Dari refers to a modern dialect form of Persian that is the standard language used in administration, government, radio, television, and print media. Because of a preponderance of Dari native speakers, who normally refer to the language as Farsi (فارسی, "Persian"), it is also known as "Afghan Persian" in some Western sources. [9] [10]

The Dari language spoken in Afghanistan is not to be confused with the language of Iran called Dari or Gabri, which is a language of the Central Iranian subgroup spoken in some Zoroastrian communities. [25] [26]

Dari comes from Middle Persian which was spoken during the rule of the Sassanid dynasty. In general, Iranian languages are known from three periods, usually referred to as Old, Middle, and New (Modern) periods. These correspond to three eras in Iranian history, the old era being the period from some time before, during, and after the Achaemenid period (that is, to 300 BC), the Middle Era being the next period, namely, the Sassanid period and part of the post-Sassanid period, and the New era being the period afterward down to the present day. [27] [28] [29]

But it is thought that the first person in Europe to use the term Deri for Dari was Thomas Hyde, at Oxford, in his chief work, Historia religionis veterum Persarum (1700). [30]

Dari or Deri has two meanings. It may mean the language of the court:

It may also indicate a form of poetry used from Rudaki to Jami. In the fifteenth century it appeared in Herat under the Persian-speaking Timurid dynasty. The Persian--language poets of the Mughal Empire who used the Indian verse methods or rhyme methods, like Bedil and Muhammad Iqbal, became familiar with the araki form of poetry. Iqbal loved both styles of literature and poetry, when he wrote:

This can be translated as:

All the parrots of India will crack sugar

Through this Persian Candy which is going to Bengal [34] [35]

Here qand-e Pārsī (" Rock candy of Persia") is a metaphor for the Persian language and poetry.

Persian replaced the Central Asian languages of the Eastern Iranics. [36] Ferghana, Samarkand, and Bukhara were starting to be linguistically Darified in originally Khorezmian and Soghdian areas during Samanid rule. [37] Dari Persian spread around the Oxus River region, Afghanistan, and Khorasan after the Arab conquests and during Islamic-Arab rule. [38] [39] The replacement of the Pahlavi script with the Arabic script in order to write the Persian language was done by the Tahirids in 9th century Khorasan. [40] The Dari Persian language spread and led to the extinction of Eastern Iranian languages like Bactrian, Khwarezmian with only a tiny amount of Sogdian descended Yaghnobi speakers remaining among the now Persian-speaking Tajik population of Central Asia, due to the fact that the Arab-Islamic army which invaded Central Asia also included some Persians who governed the region like the Sassanids. [41] Persian was rooted into Central Asia by the Samanids. [42] Persian phased out Sogdian. [43] The role of lingua franca that Sogdian originally played was succeeded by Persian after the arrival of Islam. [44]

Table of the important terms of the Persian poets

This table gives information on how many times the poets of Persian literature wrote the terms Iran, Turan, Parsi, Farsi, Dari, Khorassan, and Pahlevi. It is worth mentioning that many of Nazm ( = verse نظم) i Dari or Dastan i Dari (a tale of Dari), Tarz e Guftar e Dari (طرز گفتار دری style of Dari convers) have spoken. Nazm (verse form) and Nassir (نثر = novel, short story, etc.) and درامه (drama) – the three genres of literature. New Persian literature begins with Poems of Rudaki.

Counted according to sources from these Internet sites [45] [46] 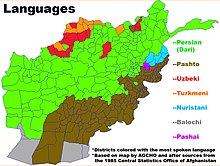 Dari is one of the two official languages of Afghanistan (the other being Pashto). In practice though, it serves as the de facto lingua franca among the various ethnolinguistic groups.

Dari is spoken natively by about twenty-five percent to about eighty percent population of Afghanistan as a primary language. [9] [17] [47] [48] [49] Tajiks, who comprise approximately 27% of the population, are the primary speakers, followed by Hazaras (9%) and Aymāqs (4%). Moreover, many Pashtuns living in Tajik and Hazara concentrated areas also use Dari as a first language. The World Factbook states that eighty percent of the Afghan population speaks the Dari language. [9] About 2.5 million Afghans in Iran and Afghans in Pakistan, part of the wider Afghan diaspora, also speak Dari as one of their primary languages. [50]

Dari dominates the northern, western, and central areas of Afghanistan, and is the common language spoken in cities such as Mazar-i-Sharif, Herat, Fayzabad, Panjshir, Bamiyan, and the Afghan capital of Kabul where all ethnic groups are settled. Dari-speaking communities also exist in southwestern and eastern Pashtun-dominated areas such as in the cities of Ghazni, Farah, Zaranj, Lashkar Gah, Kandahar, and Gardez.

Dari has contributed to the majority of Persian borrowings in several Indo-Aryan languages, such as Urdu, Hindi, Punjabi, Bengali and others, as it was the administrative, official, cultural language of the Persianate Mughal Empire and served as the lingua franca throughout the Indian subcontinent for centuries. Often based in Afghanistan, Turkic Central Asian conquerors brought the language into South Asia. [51] The basis in general for the introduction of Persian language into the subcontinent was set, from its earliest days, by various Persianized Central Asian Turkic and Afghan dynasties. [52] The sizable Persian component of the Anglo-Indian loan words in English and in Urdu therefore reflects the Dari pronunciation. For instance, the words dopiaza and pyjama come from the Dari pronunciation; in Iranian Persian they are pronounced do-piyāzeh and pey-jāmeh. Persian lexemes and certain morphological elements (e.g., the ezāfe) have often been employed to coin words for political and cultural concepts, items, or ideas that were historically unknown outside the South Asian region, as is the case with the aforementioned "borrowings". The Dari language has a rich and colorful tradition of proverbs that deeply reflect Afghan culture and relationships, as demonstrated by U.S. Navy Captain Edward Zellem in his bilingual books on Afghan Dari proverbs collected in Afghanistan. [53] [54]

Differences between Iranian and Afghan Persian

There are phonological, lexical, [55] and morphological [29] differences between Afghan Persian and Iranian Persian. There are no significant differences in the written forms, other than regional idiomatic phrases.

The phonology of Dari as spoken in Kabul, compared to Classical Persian, is overall more conservative than the standard accent of Iran. The principal differences between standard Iranian Persian and Afghan Persian as based on the Kabul dialect are:

The Kabuli dialect has become the standard model of Dari in Afghanistan, as has the Tehrani dialect in relation to the Persian in Iran. Since the 1940s, Radio Afghanistan has broadcast its Dari programs in Kabuli Dari, which ensured the homogenization between the Kabuli version of the language and other dialects of Dari spoken throughout Afghanistan. Since 2003, the media, especially the private radio and television broadcasters, have carried out their Dari programs using the Kabuli variety.

Political views and disputes on the language

Successive governments of Afghanistan have promoted New Persian as an official language of government since the time of the Delhi Sultanate (1206–1526), even as those governments were dominated by Pashtun people. Sher Ali Khan of the Barakzai dynasty (1826–1973) first introduced the Pashto language as an additional language of administration. The local name for the Persian variety spoken in Afghanistan was officially changed from Farsi to Dari, meaning "court language", in 1964. [58] [59] [60] Zaher said there would be, as there are now, two official languages, Pashto and Farsi, though the latter would henceforth be named Dari. Within their respective linguistic boundaries, Dari and Pashto are the media of education.

The term continues to divide opinion in Afghanistan today. While Dari has been the official name for decades, "Farsi" is still the preferred name to many Persian speakers of Afghanistan. Omar Samad, an Afghan analyst and ambassador, says of the dispute: [61]

This debate pits those who look at language as a shared heritage that includes thinkers, writers, and poets of the Farsi language against those who believe that Dari has older roots and provides a distinct identity that cannot be confused with Iran's claim.