From Wikipedia
https://en.wikipedia.org/wiki/Cyclometer
Cryptologic device
This article is about the cryptologic device. For the device used in cycling, see cyclocomputer. "Cyclometer" also means a person who works either on the classic circle-squaring problem or on the geometry of circles. 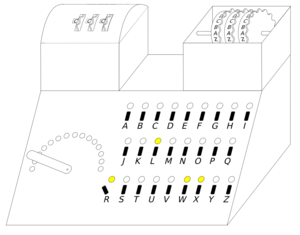 The cyclometer was a cryptologic device designed, "probably in 1934 or 1935," by Marian Rejewski of the Polish Cipher Bureau's German section (BS-4) to facilitate decryption of German Enigma ciphertext. [1] The original machines are believed to have been destroyed shortly before the German invasion of Poland that launched the Second World War, to prevent the Germans learning that their cipher had been broken.

Using drawings made by Rejewski, Hal Evans and Tim Flack at the Department of Engineering, University of Cambridge, in 2019 constructed a working version of the cyclometer. [2] 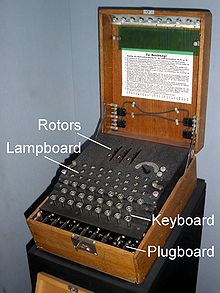 The Enigma machine was an electro-mechanical rotor machine with a scrambler consisting of (from right to left) an entry drum, three rotors and a reflector. It was available commercially from the early 1920s and was modified for use by the German military who adopted it later in the decade.

Frode Weierud provides the procedure, secret settings, and results that were used in a 1930 German technical manual. [3] [4]

The first line of the message is not encrypted. The "1035" is the time, "90" is number of characters encrypted under the message key, and "341" is a system indicator that tells the recipient how the message was encrypted (i.e., using Enigma with a certain daily key). The first six letters in the body ("PKPJXI") are the doubled key ("ABLABL") encrypted using the daily key settings and starting the encryption at the ground setting/Grundstellung "FOL". The recipient would decipher the first six letters to recover the message key ("ABL"); he would then set the machine's rotors to "ABL" and decipher the remaining 90 characters. Notice that the Enigma does not have numerals, punctuation, or umlauts. Numbers were spelled out. Most spaces were ignored; an "X" was used for a period. Umlauts used their alternative spelling with a trailing "e". Some abbreviations were used: a "Q" was used for "CH".

Marian Rejewski was a mathematics student at Poznań University. During that time, the Polish Cipher Bureau recruited Rejewski and some other mathematics students including Jerzy Różycki and Henryk Zygalski to take a Bureau-sponsored course on cryptology. The Bureau later hired some of the students to work part-time at a local branch of Bureau. Rejewski left Poznań to study mathematics at University of Göttingen, but after a year he returned to Poznań. In September 1932, Rejewski, Różycki, and Zygalski went to Warsaw and started working for the Polish Cipher Bureau full-time.

During December 1932, Marian Rejewski was tasked by the Cipher Bureau to work on the German Enigma. The Bureau had attempted to break a few years earlier, but had failed. Within a few weeks, Rejewski had discovered how to break the German Enigma cipher machine. The German Enigma message procedures at the time used common but secret daily machine settings, but the procedures also had each code clerk choose a three-letter message key. For example, a clerk might choose "ABL" as the message key. The message key was used to set the initial position of the rotors when encrypting (or decrypting) the body of the message. Choosing a different message key was a security measure: it avoided having all the day's messages sent using the same polyalphabetic key which would have made the messages vulnerable to a polyalphabetic attack. However, the sender needed to communicate the message key to the recipient in order for the recipient to decrypt the message. The message key was first encrypted using the day's Grundstellung (a secret initial position of the Enigma's rotors, e.g., "FOL").

With the help of a commercial Enigma machine, some German materials obtained by French spy Hans Thilo-Schmidt, and German cipher clerks who would choose weak keys, Rejewki was able to reverse engineer the wiring of the Enigma's rotors and reflector. The Polish Cipher Bureau then built several Polish Enigma doubles that could be used to decipher German messages.

For example, for the daily key in a 1930 technical manual, then (with enough messages) Rejewski could find the following characteristics:

Rejewski could use this cycle information and some sloppy habits of code clerks to figure out the individual permutations A B C D E F using the grill method, but that method was tedious. After using the grill, the Poles would know the rightmost rotor and its position, the plugboard connections, and Q (the permutation of the reflector and other two rotors). In order to get the daily key, the Poles would still have a lot of work to do, and that work could entail trying all possible orders and positions for the two left rotors to find the position for the Grundstellung. The Poles started using a Q-catalog to make part of the grill method easier; that catalog had 4,056 entries (26 × 26 × 6). To find the ring settings, the grill method could require trying 17,576 possibilities.

The Poles looked for another attack, and they settled on another catalog method. There were only 105,456 individual permutations that the Poles considered (the Poles ignored cases where the two left drums moved while encrypting the indicator). If the Poles had a catalog of those permutations, then they could look up the rotor order and rotor positions. Unfortunately, the Cauchy cycle notation is not suitable. The cycle notation for AD could be put in a canonical alphabetical order to serve as a key, but that key would be different for each of the 7 trillion possible plugboard settings.

The result would be the appropriate rotor order and the positions of all the rotors without much work. The method was simpler than the grill method and would work when there were many steckers.

From some daily traffic, the cryptanalyst would calculate the characteristic.

In the grill method, the above characteristic would be solved for the individual permutations A B C D E F and then a laborious search would be done. Instead, the characteristic's paired cycle lengths would be calculated:

Those lengths would be looked up in the card catalog, and an entry would be found that would state the wheel order (II, I, III) and the initial position of each wheel.

The card catalog did not include the actual characteristic: the cyclometer only indicated membership in a cycle; it did not specify the order of letters in a cycle. After finding a catalog entry, the cryptanalyst would then calculate the characteristic without steckers (just the catalog settings). The cryptanalyst can determine each of the individual permutations A* B* C* D* E* F* by setting an Enigma to the given wheel order and initial positions. The cryptanalyst then presses a and holds it down; the corresponding lamp lights and is written down; without releasing the first letter, the cryptanalyst presses b and then releases the first letter; that keeps the machine from advancing the rotors and lights the lamp corresponding to b. After mapping out all of A, the cryptanalyst can move on to B and the other permutations. The cyptanalyst recovers the unsteckered characteristic:

The two characteristics are then used to solve the stecker permutation S.

For this example, there are six steckers, and they would affect 12 characters. Looking at the CF cycles, the plugboard cycles (un)(fa) must transpose with the un-steckered cycles (vt)(mi). None of the letters are same, so all of those eight letters are steckered. Looking at the singleton cycles of CF and C*F* shows not only that "e" is not steckered, but also that "w" and "z" are steckered together. [10] Thus ten of the twelve steckered letters are quickly identified. Most of the other 16 letters, such as "b", "d", "g", and "l", are probably not steckered. The cycle notation of A*D*, B*E*, and C*F* can be rearranged to match the likely unsteckered characters. (The initial letter of a cycle's notation is not significant: within a cycle, the letters must keep the same sequence, but they may be rotated. For example, (dtj) is the same as (tjd) which is the same as jdt.)

At this point, the potential steckers can be read from the differences in the first two lines; they can also be checked for interchange consistency. The result is

These steckers match the 1930 Enigma example.

The only remaining secret is the ring positions (Ringstellung).

The cyclometer was used to prepare a catalog of the length and number of cycles in the "characteristics" for all 17,576 positions of the rotors for a given sequence of rotors. Since there were six such possible sequences, the resulting "catalog of characteristics," or " card catalog," comprised a total of (6) (17,576) = 105,456 entries. [11]

The utility of the card catalog, writes Rejewski, was independent of the number of plug connections being used by the Germans on their Enigma machines (and of the reconstruction of message keys). Preparation of the catalog "was laborious and took over a year, but when it was ready... daily keys [could be obtained] within about fifteen minutes." [12]

On November 1, 1937, however, the Germans changed the "reversing drum," or " reflector." [13] This forced the Cipher Bureau to start anew with a new card catalog, "a task," writes Rejewski, "which consumed, on account of our greater experience, probably somewhat less than a year's time." [14]

But then, on September 15, 1938, the Germans changed entirely the procedure for enciphering message keys, and as a result the card-catalog method became completely useless. [14] This spurred the invention of Rejewski's cryptologic bomb and Zygalski's perforated sheets. [15]