From Wikipedia
https://en.wikipedia.org/wiki/Cryogenian
Second period of the Neoproterozoic Era, with major glaciation

The Sturtian and Marinoan glaciations occurred during the Cryogenian period, [7] which are the greatest ice ages known to have occurred on Earth. These events are the subject of much scientific controversy. The main debate contests whether these glaciations covered the entire planet (the so-called " Snowball Earth") or a band of open sea survived near the equator (termed "slushball Earth").

The Cryogenian period was ratified in 1990 by the International Commission on Stratigraphy. [8] In contrast to most other time periods, the beginning of the Cryogenian is not linked to a globally observable and documented event. Instead, the base of the period is defined by a fixed rock age, that was originally set at 850 million years, [9] but changed in 2015 to 720 million years. [6]

This is problematic because estimates of rock ages are variable and are subject to laboratory error. For instance, the time scale of the Cambrian Period is not reckoned by rock younger than a given age (541 million years), but by the appearance of the worldwide Treptichnus pedum diagnostic trace fossil assemblages. This means that rocks can be recognized as Cambrian when examined in the field and do not require extensive testing to be performed in a lab to find a date.

Currently, there is no consensus on what global event is a suitable candidate to mark the start of the Cryogenian Period, but a global glaciation would be a likely candidate. [9]

The name of the geologic period refers to the very cold global climate of the Cryogenian.

Characteristic glacial deposits indicate that Earth suffered the most severe ice ages in its history during this period (Sturtian and Marinoan). According to Eyles and Young, "Late Proterozoic glaciogenic deposits are known from all the continents. They provide evidence of the most widespread and long-ranging glaciation on Earth." Several glacial periods are evident, interspersed with periods of relatively warm climate, with glaciers reaching sea level in low paleolatitudes. [10]

Glaciers extended and contracted in a series of rhythmic pulses, possibly reaching as far as the equator. [11] 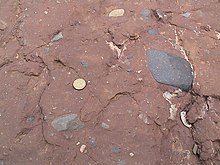 Diamictite of the Elatina Formation in South Australia, formed during the Marinoan glaciation of the late Cryogenian

The Cryogenian is generally considered to be divisible into at least two major worldwide glaciations. The Sturtian glaciation persisted from 720 to 660 million years ago, and the Marinoan glaciation which ended approximately 635 Ma, at the end of the Cryogenian. [12] The deposits of glacial tillite also occur in places that were at low latitudes during the Cryogenian, a phenomenon which led to the hypothesis of deeply frozen planetary oceans called " Snowball Earth". [13]

Eyles and Young state, "Most Neoproterozoic glacial deposits accumulated as glacially influenced marine strata along rifted continental margins or interiors." Worldwide deposition of dolomite might have reduced atmospheric carbon dioxide. The break up along the margins of Laurentia at about 750 Ma occurs at about the same time as the deposition of the Rapitan Group in North America, contemporaneously with the Sturtian in Australia. A similar period of rifting at about 650 Ma occurred with the deposition of the Ice Brook Formation in North America, contemporaneously with the Marinoan in Australia. [10] The Sturtian and Marinoan are local divisions within the Adelaide Rift Complex.

Fossils of testate amoeba (or Arcellinida) first appear during the Cryogenian period. [14] During the Cryogenian period, the oldest known fossils of sponges (and therefore animals) formed. [15] [16] [17] The issue of whether or not biology was impacted by this event has not been settled, for example Porter (2000) suggests that new groups of life evolved during this period, including the red algae and green algae, stramenopiles, ciliates, dinoflagellates, and testate amoeba. [18] The end of the period also saw the origin of heterotrophic plankton, which would feed on unicellular algae and prokaryotes, ending the bacterial dominance of the oceans. [19]