From Wikipedia
https://en.wikipedia.org/wiki/Constant_(mathematics)
Function or value which does not change during a process
For a narrower treatment related to this subject, see Mathematical constant.

In mathematics, the word constant can have multiple meanings. As an adjective, it refers to non-variance (i.e. unchanging with respect to some other value); as a noun, it has two different meanings:

For example, a general quadratic function is commonly written as:

where a, b and c are constants (or parameters), and x a variable—a placeholder for the argument of the function being studied. A more explicit way to denote this function is

which makes the function-argument status of x (and by extension the constancy of a, b and c) clear. In this example a, b and c are coefficients of the polynomial. Since c occurs in a term that does not involve x, it is called the constant term of the polynomial and can be thought of as the coefficient of x0. More generally, any polynomial term or expression of degree zero (no variable) is a constant. [3]: 18

, has a graph of a horizontal line parallel to the x-axis. [5] Such a function always takes the same value (in this case 5), because the variable does not appear in the expression defining the function. 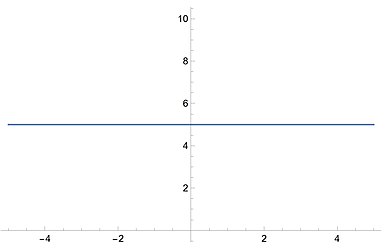 The context-dependent nature of the concept of "constant" can be seen in this example from elementary calculus:

Some values occur frequently in mathematics and are conventionally denoted by a specific symbol. These standard symbols and their values are called mathematical constants. Examples include:

In calculus, constants are treated in several different ways depending on the operation. For example, the derivative (rate of change) of a constant function is zero. This is because constants, by definition, do not change. Their derivative is hence zero.

Conversely, when integrating a constant function, the constant is multiplied by the variable of integration.

During the evaluation of a limit, a constant remains the same as it was before and after evaluation.

If f is the constant function such that

for every x then