Connections is a 10-episode documentary television series and 1978 book (Connections, based on the series) created, written, and presented by science historian James Burke. The series was produced and directed by Mick Jackson of the BBC Science and Features Department and first aired in 1978 (UK) and 1979 (USA). It took an interdisciplinary approach to the history of science and invention, and demonstrated how various discoveries, scientific achievements, and historical world events were built from one another successively in an interconnected way to bring about particular aspects of modern technology. The series was noted for Burke's crisp and enthusiastic presentation (and dry humour), historical re-enactments, and intricate working models.

The popular success of the series led to the production of The Day the Universe Changed (1985), a similar program but showing a more linear history of several important scientific developments. Years later, the success in syndication led to two sequels, Connections2 (1994) and Connections3 (1997), both for TLC. In 2004, KCSM-TV produced a program called Re-Connections, consisting of an interview of Burke and highlights of the original series, for the 25th anniversary of the first broadcast in the USA on PBS. [1] 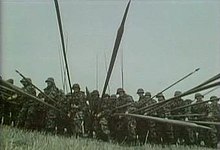 Modern soldiers demonstrate the use of steel-tipped pikes by the Swiss against Charles the Bold in one of the many re-enactments used in Connections.

Connections explores an "Alternative View of Change" (the subtitle of the series) that rejects the conventional linear and teleological view of historical progress. Burke contends that one cannot consider the development of any particular piece of the modern world in isolation. Rather, the entire gestalt of the modern world is the result of a web of interconnected events, each one consisting of a person or group acting for reasons of their own motivations (e.g., profit, curiosity, religion) with no concept of the final, modern result to which the actions of either them or their contemporaries would lead. The interplay of the results of these isolated events is what drives history and innovation, and is also the main focus of the series and its sequels.

To demonstrate this view, Burke begins each episode with a particular event or innovation in the past (usually ancient or medieval times) and traces the path from that event through a series of seemingly unrelated connections to a fundamental and essential aspect of the modern world. For example, the episode "The Long Chain" traces the invention of plastics from the development of the fluyt, a type of Dutch cargo ship.

Burke also explores three corollaries to his initial thesis. The first is that, if history is driven by individuals who act only on what they know at the time, and not because of any idea as to where their actions will eventually lead, then predicting the future course of technological progress is merely conjecture. Therefore, if we are astonished by the connections Burke is able to weave among past events, then we will be equally surprised to what the events of today eventually will lead, especially events of which we were not even aware at the time.

The second and third corollaries are explored most in the introductory and concluding episodes, and they represent the downside of an interconnected history. If history progresses because of the synergistic interaction of past events and innovations, then as history does progress, the number of these events and innovations increases. This increase in possible connections causes the process of innovation to not only continue, but also to accelerate. Burke poses the question of what happens when this rate of innovation, or more importantly 'change' itself, becomes too much for the average person to handle, and what this means for individual power, liberty, and privacy.

Lastly, if the entire modern world is built from these interconnected innovations, all increasingly maintained and improved by specialists who required years of training to gain their expertise, what chance does the average citizen without this extensive training have in making an informed decision on practical technological issues, such as the building of nuclear power plants or the funding of controversial projects such as stem cell research? Furthermore, if the modern world is increasingly interconnected, what happens when one of those nodes collapses? Does the entire system follow suit?

The original 1978 Connections 10-episode documentary television series was created, written, and presented by science historian James Burke and had a companion book (Connections, based on the series). The 1978 Connections companion book was published about the time the middle of the series was airing, so likely was written in parallel to the series and had a post-production editing release. [2] The very popular book was re-released as a work in a 1995 edition, in 1998 (relations to sections below is unknown), and again in 2007 as both hardcover or softcover editions. Since the television series varied in content with each corresponding production run and release, it is likely the companion volumes (as is suggest by the plethora of ISBN codes) are also different works. This 1978 work's coverage deviates in some topics and details being both more in depth and a bit broader, from the lighter coverage of the episodes. It can be found in many libraries.

All three Connections documentaries have been released in their entirety as DVD box sets in the US. The ten episodes of series one were released in Europe (Region 2) on 6 February 2017.

Burke also wrote a series of Connections articles in Scientific American, and published a book of the same name (1995, ISBN  0-316-11672-6), all built on the same theme of exploring the history of science and ideas, going back and forth through time explaining things on the way and, generally, coming back to the starting point.

Burke produced another documentary series called The Day the Universe Changed in 1985, which explored man's concept of how the universe worked in a manner similar to the original Connections.

Connections (video game), a Myst-style computer game with James Burke and others providing video footage and voice acting, was released in 1995. [3] It was a runner-up for Computer Gaming World's award for the best "Classics/Puzzles" game of 1995, which ultimately went to You Don't Know Jack. The editors wrote of Connections, "That you enjoy yourself so much you hardly realize that you're learning is a tribute to the design." [4]

A clip from the episode "Yesterday, Tomorrow and You" appears in the 2016 video game The Witness.