A conformal projection can be defined as one that is locally conformal at every point on the Earth. Thus, every small figure on the earth is nearly similar to its image on the map. The projection preserves the ratio of two lengths in the small domain. All Tissot's indicatrices of the projections are circles.

A non-conformal projection can be used in a limited domain such that the projection is locally conformal. Glueing many maps together restores roundness. To make a new sheet from many maps or to change the center, the body must be re-projected.

Seamless online maps can be very large Mercator projections, so that any place can become the map's center, then the map remains conformal. However, it is difficult to compare lengths or areas of two far-off figures using such a projection.

The Universal Transverse Mercator coordinate system and the Lambert system in France are projections that support the trade-off between seamlessness and scale variability. 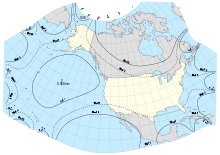 A contour chart of scale factors of GS50 projection

Conformal maps containing large regions vary scales by locations, so it is difficult to compare lengths or areas. However, some techniques require that a length of 1 degree on a meridian = 111 km = 60 nautical miles. In non-conformal maps, such techniques are not available because the same lengths at a point vary the lengths on the map.

In Mercator or stereographic projections, scales vary by latitude, so bar scales by latitudes are often appended. In complex projections such as of oblique aspect. Contour charts of scale factors are sometimes appended.