From Wikipedia
https://en.wikipedia.org/wiki/Comparator
For other uses, see Comparator (disambiguation).

Illustration of how a comparator works

In electronics, a comparator is a device that compares two voltages or currents and outputs a digital signal indicating which is larger. It has two analog input terminals

and one binary digital output

. The output is ideally

A comparator consists of a specialized high- gain differential amplifier. They are commonly used in devices that measure and digitize analog signals, such as successive-approximation ADCs, as well as relaxation oscillators.

or when powered from a unipolar TTL/ CMOS power supply,

Specific rail-to-rail comparators with p–n–p input transistors, like the LM139 family, allow the input potential to drop 0.3 volts below the negative supply rail, but do not allow it to rise above the positive rail. [2] Specific ultra-fast comparators, like the LMH7322, allow input signal to swing below the negative rail and above the positive rail, although by a narrow margin of only 0.2 V. [3] Differential input voltage (the voltage between two inputs) of a modern rail-to-rail comparator is usually limited only by the full swing of power supply.

An operational amplifier (op-amp) has a well balanced difference input and a very high gain. This parallels the characteristics of comparators and can be substituted in applications with low-performance requirements. [4]

A comparator circuit compares two voltages and outputs either a 1 (the voltage at the plus side) or a 0 (the voltage at the negative side) to indicate which is larger. Comparators are often used, for example, to check whether an input has reached some predetermined value. In most cases a comparator is implemented using a dedicated comparator IC, but op-amps may be used as an alternative. Comparator diagrams and op-amp diagrams use the same symbols.

Figure 1 above shows a comparator circuit. Note first that the circuit does not use feedback. The circuit amplifies the voltage difference between Vin and VREF, and it outputs the result at Vout. If Vin is greater than VREF, then voltage at Vout will rise to its positive saturation level; that is, to the voltage at the positive side. If Vin is lower than VREF, then Vout will fall to its negative saturation level, equal to the voltage at the negative side.

In practice, this circuit can be improved by incorporating a hysteresis voltage range to reduce its sensitivity to noise. The circuit shown in Figure 1, for example, will provide stable operation even when the Vin signal is somewhat noisy.

A dedicated voltage comparator will generally be faster than a general-purpose operational amplifier used as a comparator, and may also contain additional features such as an accurate, internal reference voltage, adjustable hysteresis, and a clock gated input.

A dedicated voltage comparator chip such as LM339 is designed to interface with a digital logic interface (to a TTL or a CMOS). The output is a binary state often used to interface real world signals to digital circuitry (see analog-to-digital converter). If there is a fixed voltage source from, for example, a DC adjustable device in the signal path, a comparator is just the equivalent of a cascade of amplifiers. When the voltages are nearly equal, the output voltage will not fall into one of the logic levels, thus analog signals will enter the digital domain with unpredictable results. To make this range as small as possible, the amplifier cascade is high gain. The circuit consists of mainly bipolar transistors. For very high frequencies, the input impedance of the stages is low. This reduces the saturation of the slow, large p–n junction bipolar transistors that would otherwise lead to long recovery times. Fast small Schottky diodes, like those found in binary logic designs, improve the performance significantly though the performance still lags that of circuits with amplifiers using analog signals. Slew rate has no meaning for these devices. For applications in flash ADCs the distributed signal across eight ports matches the voltage and current gain after each amplifier, and resistors then behave as level-shifters.

While it is easy to understand the basic task of a comparator, that is, comparing two voltages or currents, several parameters must be considered while selecting a suitable comparator:

While in general comparators are "fast," their circuits are not immune to the classic speed-power tradeoff. High speed comparators use transistors with larger aspect ratios and hence also consume more power. [6] Depending on the application, select either a comparator with high speed or one that saves power. For example, nano-powered comparators in space-saving chip-scale packages (UCSP), DFN or SC70 packages such as MAX9027, LTC1540, LPV7215, MAX9060 and MCP6541 are ideal for ultra-low-power, portable applications. Likewise if a comparator is needed to implement a relaxation oscillator circuit to create a high speed clock signal then comparators having few nano seconds of propagation delay may be suitable. ADCMP572 (CML output), LMH7220 (LVDS Output), MAX999 (CMOS output / TTL output), LT1719 (CMOS output / TTL output), MAX9010 (TTL output), and MAX9601 (PECL output) are examples of some good high speed comparators.

A comparator normally changes its output state when the voltage between its inputs crosses through approximately zero volts. Small voltage fluctuations due to noise, always present on the inputs, can cause undesirable rapid changes between the two output states when the input voltage difference is near zero volts. To prevent this output oscillation, a small hysteresis of a few millivolts is integrated into many modern comparators. [7] For example, the LTC6702, MAX9021 and MAX9031 have internal hysteresis desensitizing them from input noise. In place of one switching point, hysteresis introduces two: one for rising voltages, and one for falling voltages. The difference between the higher-level trip value (VTRIP+) and the lower-level trip value (VTRIP-) equals the hysteresis voltage (VHYST). 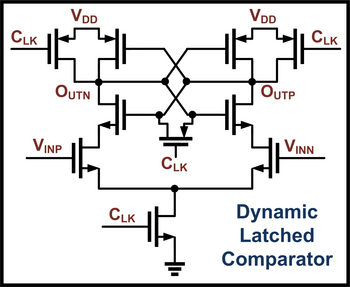 Because comparators have only two output states, their outputs are either near zero or near the supply voltage. Bipolar rail-to-rail comparators have a common-emitter output that produces a small voltage drop between the output and each rail. That drop is equal to the collector-to-emitter voltage of a saturated transistor. When output currents are light, output voltages of CMOS rail-to-rail comparators, which rely on a saturated MOSFET, range closer to the rail voltages than their bipolar counterparts. [9]

A continuous comparator will output either a "1" or a "0" any time a high or low signal is applied to its input and will change quickly when the inputs are updated. However, many applications only require comparator outputs at certain instances, such as in A/D converters and memory. By only strobing a comparator at certain intervals, higher accuracy and lower power can be achieved with a clocked (or dynamic) comparator structure, also called a latched comparator. Often latched comparators employ strong positive feedback for a "regeneration phase" when a clock is high, and have a "reset phase" when the clock is low. [10] This is in contrast to a continuous comparator, which can only employ weak positive feedback since there is no reset period.

A null detector identifies when a given value is zero. Comparators are ideal for null detection comparison measurements, since they are equivalent to a very high gain amplifier with well-balanced inputs and controlled output limits. The null detector circuit compares two input voltages: an unknown voltage and a reference voltage, usually referred to as vu and vr. The reference voltage is usually on the non-inverting input (+), while the unknown voltage is usually on the inverting input (−). (A circuit diagram would display the inputs according to their sign with respect to the output when a particular input is greater than the other.) Unless the inputs are nearly equal (see below), the output is either positive or negative, for example ±12 V. In the case of a null detector the aim is to detect when the input voltages are nearly equal, which gives the value of the unknown voltage since the reference voltage is known.

This circuit requires only a single comparator with an open-drain output as in the LM393, TLV3011 or MAX9028. The circuit provides great flexibility in choosing the voltages to be translated by using a suitable pull up voltage. It also allows the translation of bipolar ±5 V logic to unipolar 3 V logic by using a comparator like the MAX972. [9]

When a comparator performs the function of telling if an input voltage is above or below a given threshold, it is essentially performing a 1-bit quantization. This function is used in nearly all analog to digital converters (such as flash, pipeline, successive approximation, delta-sigma modulation, folding, interpolating, dual-slope and others) in combination with other devices to achieve a multi-bit quantization. [14]

Comparators can also be used as window detectors. In a window detector, a comparator is used to compare two voltages and determine whether a given input voltage is under voltage or over voltage.