From Wikipedia
https://en.wikipedia.org/wiki/Cohort_(military_unit)
For other senses of this word, see cohort (disambiguation).

A cohort (from the Latin cohors, plural cohortes, see wikt:cohors for full inflection table) was a standard tactical military unit of a Roman legion. Although the standard size changed with time and situation, it was generally composed of 480 soldiers. [1] A cohort is considered to be the equivalent of a modern military battalion. The cohort replaced the maniple following the reforms attributed to Gaius Marius in 107 BC. [2] Shortly after the military reforms of Marius, and until the middle of the third century AD, ten cohorts (about 5,000 men total) made up a legion. Cohorts were named "first cohort,” "second cohort," etc. The first cohort consisted of experienced legionaries, while the legionaries in the tenth cohort were less experienced.

Originally, a cohort consisted of six centuriae, each commanded by a centurion assisted by junior officers. At various times prior to the reforms, a century might have 100 men. The cohort had no permanent commander; during combat, the most experienced centurion of the six commanded the entire cohort.[ citation needed] In order of seniority, the six centurions were titled hastatus posterior, hastatus prior, princeps posterior, princeps prior, pilus posterior and pilus prior. The first centurion of the first cohort was called primus pilus.

During the Marian reforms in the 1st century BC, the command structure and make-up of the legions was established in a formal standard. Standard centuriae consisted of 80 men each. The first cohort was made up of five double-strength centuries (160 men). The centurion of its first century automatically was senior in the legion known as the primus pilus. The primus pilus could be promoted to praefectus castrorum (camp prefect). The praefectus castrorum was in charge of the daily administration of a legion.

These ranks followed the order of seniority in the earlier manipular legions. Youngest and least experienced units were termed hastati, next principes, and the oldest and most experienced triarii (pilus was a rare alternative name for triarius, the singular of triarii). [3]

The reformed legion numbered about 5,000 men, including officers, engineers, and cavalry ( equites legionis; 120 men plus horses). [4] 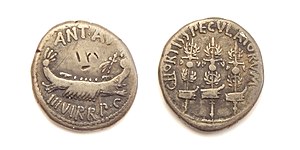 Denarius, struck under Mark Antony in honor of the cohors speculatorum

Although not part of a legion, some paramilitary corps in Rome consisted of one or more cohorts:

Furthermore, the Latin word cohors was used in a looser way to describe a rather large "company" of people (see, for instance, cohors amicorum).