From Wikipedia
https://en.wikipedia.org/wiki/Climate_of_Italy
Overview of the climate of Italy

Italy has a variety of climate systems. The inland northern areas of Italy (for example Turin, Milan, and Bologna) have a relatively cool, mid-latitude version of the Humid subtropical climate ( Köppen climate classification Cfa), while the coastal areas of Liguria and the peninsula south of Florence generally fit the Mediterranean climate profile ( Köppen climate classification Csa).

Between the north and south there can be a considerable difference in temperature, above all during the winter: on some winter days it can be −2 °C (28 °F) and snowing in Milan, while it is 8 °C (46.4 °F) in Rome and 20 °C (68 °F) in Palermo. Temperature differences are less extreme in the summer.

The east coast of the Italian peninsula is not as wet as the west coast, but is usually colder in the winter. The east coast north of Pescara is occasionally affected by the cold bora winds in winter and spring, but the wind is less strong here than around Trieste. During these frosty spells from E–NE cities like Rimini, Ancona, Pescara and the entire eastern hillside of the Apennines can be affected by true "blizzards". The town of Fabriano, located just around 300 m (984 ft) in elevation, can often see 0.5–0.6 m (1 ft 7.7 in–1 ft 11.6 in) of fresh snow fall in 24 hours during these episodes.

On the coast from Ravenna to Venice and Trieste, snow falls more rarely: during cold spells from the east, the cold wind can be harsh but with bright skies. During the snowfalls that affect Northern Italy, the Adriatic coast can see a milder Sirocco wind which makes snow turn to rain. The mild effects of this wind often disappear just a few kilometres inside the plain, and sometimes the coast from Venice to Grado sees snow while it is raining in Trieste, the Po River mouths and Ravenna. Rarely, the city of Trieste may see snow blizzards with north-eastern winds. In the colder winters, the Venice Lagoon may freeze, and in the coldest ones even enough to walk on the ice sheet. [2] Further south, snow may occur inland but it rarely happens at sea level. However, snow has been recorded as far south as Salento. Winters are generally milder in the coastal areas of the south, Sicily and Sardinia. The west coast of Italy has rainier winters while the east is more exposed to the cold Bora winds. 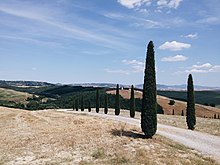 Summer is usually more stable, although the northern regions often have thunderstorms in the afternoon/night hours and some grey and rainy days. So, while south of Florence the summer is typically dry and sunny, in the north it tends to be more humid and cloudy. Even if the temperatures are similar throughout the country, the humidity can make the northern plains particularly uncomfortable. Hot weather can occur practically anywhere in Italy during the summer months. Spring and autumn weather can be very changeable, with sunny and warm weeks (sometimes with summer-like temperatures) suddenly broken off by cold spells or followed by rainy and cloudy weeks.

Fog in Po valley is frequent during the winter time.

In the south, summer marks a distinct dry season, characteristic of Mediterranean climates. This includes cities such as Naples, Rome, Bari, and Palermo. In the north, precipitation is more evenly distributed during the year, although the summer is usually slightly wetter. Between November and March the Po valley is often covered by fog, especially in the central zone ( Pavia, Piacenza, Cremona and Mantua), while the number of days with lows below 0 °C (32 °F) is usually from 60 to 90 a year, with peaks of 100–110 days in the mainly rural zones. [3]

Often, the largest snowfalls happen in February, sometime in January or March. In the Alps, snow falls more in autumn and spring over 1,500 m (4,921 ft), because winter is usually marked by cold and dry periods; while the Apennines see many more snow falls during winter, but they are warmer and less wet in the other seasons.

It is found in all the coastal areas, excluding the north-eastern area and the area of Liguria from Genoa to Savona, which have a Humid subtropical climate. The winter average varies from 6 °C (42.8 °F), in the northern areas, to 11–14 °C (51.8–57.2 °F) in the southern islands. During the summer, averages are near 23 °C (73.4 °F) in the north (Liguria) and sometimes reach 26–28 °C (78.8–82.4 °F) in the south. Precipitations mostly during the winter. Snowfalls are rare and usually very light in the north, and almost never happen in the south. Summers are dry and hot. Main cities: Cagliari, Palermo, Naples, Rome, Pescara.

A relatively "continental" and "four-season" version of the humid subtropical Cfa climate can be found in the Po and Adige valleys in the North, and sometime in low inland Central and Southern Italy. It is marked by hot and wet summers, while winters are moderately cold. The precipitation is higher and there is no dry season. Average temperatures are around 1 °C to 3 °C in January, and more than 22 °C in July and August. Main cities: Milan, Genoa, Venice, Verona, Turin, Trieste, Bologna.

Transition between Cfa and Csa climates

Some parts of Italy have a climate which cannot be precisely defined as either Cfa or Csa, presenting elements from both (e.g. summers are not wet enough for Cfa, nor so dry as in Csa; while winters are colder than similar Italian cities of Csa climate, but at the same time milder than in Cfa places). This indeed allows cultivations not seen in the Padana Plain, like olive trees, while keeping those characteristics which are not typical of Mediterranean climates (like more frequent appearances of frost or snow during winters or more frequent summer thunderstorms). This can be found both in some lake and hill resorts of Northern Italy (usually with wetter summers) and in some area like inner Tuscany (usually with drier summers). Florence is a good example of this transition climate:

It can be found in altitude in the Apennines and in the alpine foothills. Summers are between 17 and 21 °C (62.6 and 69.8 °F) Main cities and towns: Aosta, Campobasso, L'Aquila, Cuneo, Sondrio, Amatrice – mild. Belluno, Breno, Feltre – severe.

Above the tree line in the Alps. All the months with average below 10 °C (50 °F). Villages with this climate: Cervinia, Sestriere, Trepalle.

The maximum snow depth was recorded in March 1951 at the meteorological station of Lago D'Avino with a value of 1125 cm (443 inches). In the snowiest years, the snowfall can exceed 20 meters (65.6 feet) in some places in high altitudes. During the winter of 1950–51 the village of Falcade in the Dolomites received 11.5 m (38.3 feet) of snowfall, setting the record for an Inhabited place. The maximum snowfall in 24 hours (181 cm, 71.3 inches) was recorded in the village of Roccacaramanico ( Majella massif) in January 1951.