From Wikipedia
https://en.wikipedia.org/wiki/Climate_of_Antarctica
Overview of the climate of Antarctica

The climate of Antarctica is the coldest on Earth. The continent is also extremely dry (it would be a desert virtually anywhere else on Earth, but it is impossible for any location on Earth with a mean annual temperature below 14 °C to be even a steppe, let alone a desert, under the Köppen classification scheme), averaging 166 mm (6.5 in) of precipitation per year. Snow rarely melts on most parts of the continent, and, after being compressed, becomes the glacier ice that makes up the ice sheet. Weather fronts rarely penetrate far into the continent, because of the katabatic winds. Most of Antarctica has an ice-cap climate ( Köppen classification EF) with very cold, generally extremely dry weather.

Satellite measurements have identified even lower ground temperatures, with −93.2 °C (−135.8 °F) having been observed at the cloud-free East Antarctic Plateau on 10 August 2010. [4]

The mean annual temperature of the interior is −57 °C (−70.6 °F). The coast is warmer; on the coast Antarctic average temperatures are around −10 °C (14.0 °F) (in the warmest parts of Antarctica) and in the elevated inland they average about −55 °C (−67.0 °F) in Vostok. [10] [11] Monthly means at McMurdo Station range from −26 °C (−14.8 °F) in August to −3 °C (26.6 °F) in January. [12] At the South Pole, the highest temperature ever recorded was −12.3 °C (9.9 °F) on 25 December 2011. [13] Along the Antarctic Peninsula, temperatures as high as 15 °C (59 °F) have been recorded,[ clarification needed] though the summer temperature is below 0 °C (32 °F) most of the time. Severe low temperatures vary with latitude, elevation, and distance from the ocean. East Antarctica is colder than West Antarctica because of its higher elevation.[ citation needed] The Antarctic Peninsula has the most moderate climate. Higher temperatures occur in January along the coast and average slightly below freezing.

The total precipitation on Antarctica, averaged over the entire continent, is about 166 millimetres (6.5 inches) per year (Vaughan et al., J Climate, 1999). The actual rates vary widely, from high values over the Peninsula (15 to 25 inches a year) to very low values (as little as 50 millimetres (2.0 inches) in the high interior (Bromwich, Reviews of Geophysics, 1988). Areas that receive less than 250 millimetres (9.8 inches) of precipitation per year are classified as deserts. Almost all Antarctic precipitation falls as snow. [14] Rainfall is rare and mainly occurs during the summer in coastal areas and surrounding islands. [14] Note that the quoted precipitation is a measure of its equivalence to water, rather than being the actual depth of snow. The air in Antarctica is also very dry. The low temperatures result in a very low absolute humidity, which means that dry skin and cracked lips are a continual problem for scientists and expeditioners working on the continent.

Nearly all of Antarctica is covered by a sheet of ice that is, on average, at least 1,500 m (5,000 ft) thick. Antarctica contains 90% of the world's ice and more than 70% of its fresh water. If all the land-ice covering Antarctica were to melt — around 30×10^6 km3 (7.2×10^6 cu mi) of ice — the seas would rise by over 60 m (200 ft). [18] This is, however, very unlikely within the next few centuries. The Antarctic is so cold that even with increases of a few degrees, temperatures would generally remain below the melting point of ice. Higher temperatures are expected to lead to more precipitation, which takes the form of snow. This would increase the amount of ice in Antarctica, offsetting approximately one third of the expected sea level rise from thermal expansion of the oceans. [19] During a recent[ when?] decade, East Antarctica thickened at an average rate of about 1.8 cm (11⁄16 in) per year while West Antarctica showed an overall thinning of 0.9 cm (3⁄8 in) per year. [20] For the contribution of Antarctica to present and future sea level change, see sea level rise. Because ice flows, albeit slowly, the ice within the ice sheet is younger than the age of the sheet itself. 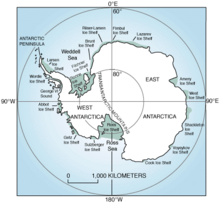 About 75% of the coastline of Antarctica is ice shelf. The majority of ice shelf consists of floating ice, and a lesser amount consists of glaciers that move slowly from the land mass into the sea. Ice shelves lose mass through breakup of glacial ice ( calving), or basal melting due to warm ocean water under the ice. [21]

Known changes in coastline ice around the Antarctic Peninsula:

The George VI Ice Shelf, which may be on the brink of instability, [23] has probably existed for approximately 8,000 years, after melting 1,500 years earlier. [24] Warm ocean currents may have been the cause of the melting. [25] Not only are the ice sheets losing mass, they are losing mass at an accelerating rate. [26]

This section is an excerpt from Climate change in Antarctica.

Climate change in Antarctica is resulting in rising temperatures and increasing snowmelt and ice loss. [27] A summary study in 2018 incorporating calculations and data from many other studies estimated that total ice loss in Antarctica due to climate change was 43 gigatons per year on average during the period from 1992 to 2002 but has accelerated to an average of 220 gigatons per year during the five years from 2012 to 2017. [28]

Some of Antarctica has been warming up; particularly strong warming has been noted on the Antarctic Peninsula. A study by Eric Steig published in 2009 noted for the first time that the continent-wide average surface temperature trend of Antarctica was slightly positive from 1957 to 2006. [29] Over the second half of the 20th century, the Antarctic Peninsula was the fastest-warming place on Earth, closely followed by West Antarctica, but these trends weakened in the early 21st-century. [30] Conversely, the South Pole in East Antarctica barely warmed last century, but in the last three decades the temperature increase there has been more than three times greater than the global average. [31] In February 2020, the continent recorded its highest temperature of 18.3 °C (64.9 °F), which was a degree higher than the previous record of 17.5 °C (63.5 °F) in March 2015. [32]