Cley next the Sea

Cley next the Sea ( /ˈkleɪˌˈklaɪ/), Anglo-Saxon Clæg "clay", is a village and civil parish on the River Glaven in Norfolk, England, 4 mi (6 km) north-west of Holt and east of Blakeney. The main A149 coast road runs through the centre of the village, causing congestion in the summer months due to the tight, narrow streets. It lies within the Norfolk Coast AONB ( Area of Outstanding Natural Beauty) and the North Norfolk Heritage Coast. In 2011 its population was 437.

The Grade I listed medieval church of St Margaret's, Cley is the largest church in the Blakeney Haven area. The huge nave dates from 1320 to 1340. Before the end of the 14th century, a large south porch was added.

A ruined building on the marshes is known as Blakeney Chapel; despite its name, it is in Cley parish, and probably never had a religious purpose.

Cley was once one of the busiest ports in England, where grain, malt, fish, spices, coal, cloth, barley and oats were exported or imported. The many Flemish gables in the town are a reminder of trade with the Low Countries. But despite its name, Cley has not been "next the sea" since the 17th century, due to land reclamation. Some of the buildings that once lined the quay remain, notably the 18th-century Cley Windmill. The windmill, a five-storey towermill, was owned by the family of singer James Blunt for many decades [3] and operated as a bed and breakfast. The mill was sold in 2006, but continues to operate as a bed and breakfast on a non-profit making basis. It was used as a backdrop of the 1949 film Conspirator with Elizabeth Taylor. Cley Mill has often been depicted by local artists and was the subject of a painting by the 20th century English landscape artist, Rowland Hilder.

After the silting up of the port, Cley had to find another industry; in the late 19th century, it became a holiday resort. The poet Rupert Brooke was staying in Cley with classics professor Francis Macdonald Cornford and his wife, the poet Frances Cornford, early in August 1914 when news came that Britain had entered what was to become the First World War. Brooke had dreamt about the war and woke to find it a reality. He did not speak to his hosts all day until Frances Cornford said, "But Rupert, you won't have to fight?" to which Brooke replied, "We shall all have to fight". [4] 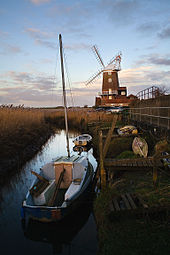 Cley Towermill stands at the edge of the village, next to the coastal marshes and a network of drainage channels

The marshes around Cley are internationally important for their populations of rare breeding and visiting birds. Cley Marshes bird reserve has been in the care of the Norfolk Wildlife Trust since 1926, making it the oldest county Wildlife Trust reserve in Britain. [5] Among resident breeding birds are avocet, bearded tit, bittern, marsh harrier and spoonbill. Winter visitors include brent goose, Eurasian wigeon, pintail and many species of wading birds. Cley, like neighbouring Salthouse is ideally situated at the apex of the North Norfolk coast as a staging ground for passage migrants, vagrants and rarities of all kinds. A new eco-friendly visitor centre opened in 2007 containing a café, shop, viewing areas (including viewing from a camera on the reserve), exhibition area, interpretation and toilets. The view from the visitor centre across the marsh to the sea is breathtaking. Cley Marshes is the home of the Bird Information Service, publishers of Birding World. The shingle bank holds large numbers of yellow horned poppy.

The salt and fresh water marshes used to be very well protected. However the cost of replenishing the shingle spit grew too much for the village to sustain. Once the repairing stopped, it became easier for waves to get through; in 1953 a large storm, measured at 5.12 metres (16.8 ft) above ordnance datum (see North Sea flood of 1953) hit the North Norfolk coast and the shingle ridge was mostly destroyed. A further storm surge in 1978 measured 4.19 metres (13.7 ft) above ordnance datum and the protection measures confined flooding to the marshes and A149 coast road. The North Norfolk Shoreline Management Plan introduced by the Environment Agency has proposed a number of strategies in the light of continual erosion and predicted rising sea levels caused by global warming: these include Advance the line, Hold the line, Managed retreat and Do nothing. Even after extensive public consultation there is widespread local concern that the marshes will be lost to the North Sea.

For local government purposes, Cley next the Sea civil parish falls under the North Norfolk District ward of Coastal and the Norfolk County division of Holt. The district councillor is Karen Ward of the Liberal Democrats, and the county councillor is Sarah Butikofer, also of the Liberal Democrats. In the UK Parliament, it falls under the constituency of North Norfolk, whose MP since 2019 is Duncan Baker of the Conservative Party.

In the Church of England, it falls under the province of Canterbury, the diocese of Norwich, the archdeaconry of Lynn, and the deanery of Holt.

In the Catholic Church in England and Wales, it falls under the province of Westminster, the diocese of East Anglia, and the deanery of King's Lynn.

Notable residents and appearance in media 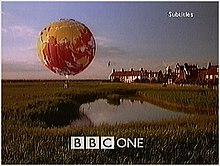 BBC One balloon over Cley

James Blunt spent time, in his early years, at his grandfather's and later his father's windmill in the village. [3]