The region Northeast Ohio, in the US state of Ohio, in its most expansive usage contains six metropolitan areas ( ClevelandŌĆōElyria, Akron, CantonŌĆōMassillon, YoungstownŌĆōWarren, Mansfield, and WeirtonŌĆōSteubenville) along with eight micropolitan statistical areas. Most of the region is considered either part of the ClevelandŌĆōAkronŌĆōCanton, OH Combined Statistical Area and media market or the YoungstownŌĆōWarren, OH-PA Combined Statistical Area and media market. In total the region is home to 4,529,596 residents. Northeast Ohio also includes most of the area known historically as the Connecticut Western Reserve. In 2011, the Intelligent Community Forum ranked Northeast Ohio as a global Smart 21 Communities list. [1] It has the highest concentration of Hungarian Americans in the United States. [2]

Different sources define the region as having various boundaries. At its largest, there are 23 counties in the region, home to over 4.5 million people, with a labor force of almost 2.2 million and an economic GDP (nominal) of $195 billion, which makes it comparable to that of New Zealand or the Republic of Ireland. [3] [4] 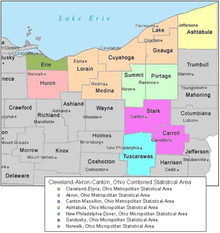 Map of the Cleveland-Akron-Canton, Ohio CSA Based on 2013 U.S. Census Definitions

Most of Northeast Ohio is part of the ClevelandŌĆōAkronŌĆōCanton Combined Statistical Area, which ranked as the 17th-largest Combined Statistical Area (CSA) in the United States as of the 2010 Census with a population of 3,630,166. It includes the five counties that make up Greater Cleveland (Cuyahoga, Lake, Geauga, Medina, and Lorain), the Akron metropolitan area (Portage and Summit counties), CantonŌĆōMassillon metropolitan area (Stark and Carroll counties), and the Ashtabula, Sandusky, Norwalk, New Philadelphia-Dover, and Wooster micropolitan areas.

The ClevelandŌĆōAkronŌĆōCanton media market covers much of this area, including all of Northeast Ohio except for the Youngstown/Warren region. It is the 19th largest in the United States as of 2017, according to Nielsen Media Research. Northeast Ohio and the Cleveland CSA are also part of the larger Great Lakes Megalopolis.

Northeast Ohio is home to a number of higher education institutions, including:

There are a number of other professional sports teams in the region that play in various minor leagues. The Indians have three minor league affiliates in the area: the AA Akron RubberDucks of the Eastern League who play at Canal Park in Akron, the Single-A Lake County Captains of the Midwest League who play at Classic Park in Eastlake, and the Single-A Mahoning Valley Scrappers of the New YorkŌĆōPenn League, who play at Eastwood Field in Niles. Additionally, there is an independent baseball team, the Lake Erie Crushers of the Frontier League, who play at Sprenger Stadium in Avon. The region also boasts of a lower league professional soccer team in Cleveland SC that plays at Don Shula Stadium. The Youngstown Phantoms are a junior ice hockey team in the United States Hockey League that has home games at Covelli Centre.

Motorsports venues in the region include Mid-Ohio Sports Car Course in Lexington and Summit Motorsports Park in Norwalk, a major NHRA venue. 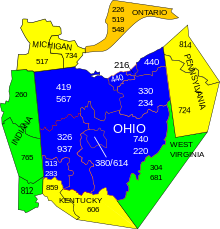 In the 1950s, AT&T assigned most of Northeast Ohio area code 216. The western half of the region, including Ashland and Richland counties, and parts of Huron, Wayne and Erie counties, was assigned area code 419. In 1996, area code 216 was reduced in size to cover the northern half of its prior area, centering on Cleveland. Area code 330 was introduced for the southern half of Northeast Ohio, including Summit, Portage, Medina, Stark, Columbiana and Mahoning counties, and much of Wayne, Trumbull and Tuscarawas counties.

In 1997, area code 216 was further split as the need for additional phone numbers grew. Area code 216 was again reduced in geographical area to cover the city of Cleveland and its inner ring suburbs. Area code 440 was introduced to cover the remainder of was what previously area code 216, including all of Lake, Lorain, Ashtabula and Geauga counties, and parts of Trumbull, Huron, Erie and Cuyahoga counties. Some communities, such as Parma and Parma Heights, were divided into multiple area codes. In 1999, Congressman Dennis Kucinich introduced federal legislation to protect small and medium-sized cities from being split into two or more area codes. [5] [6]