Clearfield County was formed by the Act of Assembly by the second Governor of Pennsylvania at the time, Thomas McKean on March 26, 1804. The county was created from parts of the already created counties of Huntingdon and Lycoming. The name for the county was most likely derived from the many cleared fields of the valleys surrounding Clearfield Creek and West Branch of the Susquehanna River, formed by the bison herds and also by old corn fields of prior Native Americans tribes.

The first board of county commissioners to the county were Roland Curtin, James Fleming and James Smith, all appointed by Governor McKean in 1805. The first act the commissioners did was to create a local government or seat of the newly created county. They came upon land owned at the time by Abraham Witmer at a village known as Chincleclamousche, named after the Native American chief of the Cornplanter's tribe of Senecas. Clearfield became the new name of the old village.

The two major industries of the county in the mid-1800s until the early 1900s was lumber and coal. Lumber was still being floated down the West Branch of the Susquehanna up until 1917. Coal remains the main industry of the county to this day.

No case tried in the county has caused as much comment as the union conspiracy trials. In all there were fifty-six persons, primarily miners in the Houtzdale region, who were charged with conspiracy as organized strikers. The first case against John Maloney and fifty three others was tried in 1875, before a jury with Judge Orvis presiding. All were found guilty, although they seem to have been solely peacefully picketing. [5] Four were sentenced to one year's imprisonment, eight for six months, and sentences suspended as to the others. As every organized labor society in the USA was interested in the result, the events of the trial and verdict were telegraphed throughout the country [6] This proceeding was followed by the trial of the remaining two offenders who were union representatives, John Siney, and Xingo Parks. Siney was then the President of the Miners’ National Association (MNA). He came to Houtzdale and delivered an address of support for the union strike, for which he was arrested. Parks was an able organizer for the MNA. They were defended by US Senator Matthew H. Carpenter of Wisconsin. At trial Siney was acquitted, but Parks was found guilty of inciting unlawful assembly. He was sentenced to one year's imprisonment, but pardoned within a month from the time sentence was pronounced. [7] These cases led in the next year to a liberalization of the Pennsylvania conspiracy law, through amendment providing that only "force, threat, or menace of harm to person or property" should be considered illegal. [8] 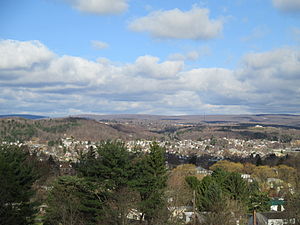 The mountainous terrain of the county made traffic difficult for early settlers. Various Native American paths and trails crossing the area were used intermittently by settlers, invading armies, and escaped slaves travelling north along the Underground Railroad. A major feature located in Bloom Township, Pennsylvania within the county is known as Bilger's rocks and exhibits fine examples of exposed sandstone bedrock that was created during the formation of the Appalachian Mountains. 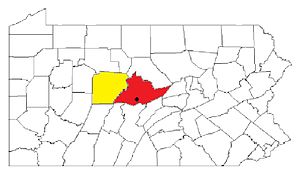 While the county registration tends to be evenly matched between Democrats and Republicans, the county trends Republican in statewide and federal elections. The last Democrat to win a majority in the county was Lyndon B. Johnson in 1964, while Jimmy Carter and Bill Clinton winning pluralities in the county, with the former by 88 votes. In 2006, Democrat Bob Casey Jr. received 55% of its vote when he unseated incumbent Republican US Senator Rick Santorum and Ed Rendell received 50.2% of the vote against Lynn Swann. Each of the three row-office statewide winners carried Clearfield in 2008. 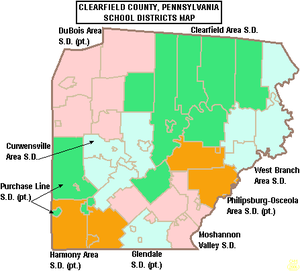 There are two Pennsylvania state parks in Clearfield County.

Clearfield County is also home to the largest wild area in Pennsylvania, the Quehanna Wild Area. A culturally and historically significant natural formation of massive sandstone megaliths can be found at Bilger's rocks. 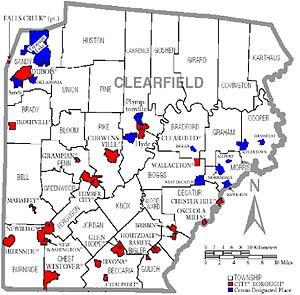 Under Pennsylvania law, there are four types of incorporated municipalities: cities, boroughs, townships, and, in at most two cases, towns. The following cities, boroughs and townships are located in Clearfield County:

Census-designated places are geographical areas designated by the U.S. Census Bureau for the purposes of compiling demographic data. They are not actual jurisdictions under Pennsylvania law. Other unincorporated communities, such as villages, may be listed here as well.

Unincorporated areas are region of land that are not parts of any incorporated boroughs, cities, or towns.

The population ranking of the following table is based on the 2010 census of Clearfield County. [13]