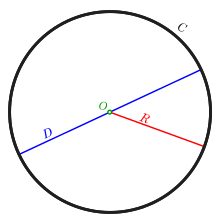 When a circle's diameter is 1, its circumference is π.

When a circle's radius is 1—called a unit circle—its circumference is 2π.

The circumference of a circle is related to one of the most important mathematical constants. This constant, pi, is represented by the Greek letter π. The first few decimal digits of the numerical value of π are 3.141592653589793 ... [4] Pi is defined as the ratio of a circle's circumference C to its diameter d:

The use of the mathematical constant π is ubiquitous in mathematics, engineering, and science.

In Measurement of a Circle written circa 250 BCE, Archimedes showed that this ratio (C/d, since he did not use the name π) was greater than 310/71 but less than 31/7 by calculating the perimeters of an inscribed and a circumscribed regular polygon of 96 sides. [5] This method for approximating π was used for centuries, obtaining more accuracy by using polygons of larger and larger number of sides. The last such calculation was performed in 1630 by Christoph Grienberger who used polygons with 1040 sides.

Circumference is used by some authors to denote the perimeter of an ellipse. There is no general formula for the circumference of an ellipse in terms of the semi-major and semi-minor axes of the ellipse that uses only elementary functions. However, there are approximate formulas in terms of these parameters. One such approximation, due to Euler (1773), for the canonical ellipse,

is the circumference of a circumscribed concentric circle passing through the endpoints of the ellipse's major axis, and the lower bound

is the perimeter of an inscribed rhombus with vertices at the endpoints of the major and minor axes.

The circumference of an ellipse can be expressed exactly in terms of the complete elliptic integral of the second kind. [7] More precisely, we have

is the length of the semi-major axis and