Christmas pudding is a type of pudding traditionally served as part of the Christmas dinner in Britain, Ireland and in other countries where it has been brought by British and Irish immigrants. It has its origins in medieval England, and is sometimes known as plum pudding or just "pud", [1] [2] though this can also refer to other kinds of boiled pudding involving dried fruit. Despite the name "plum pudding", the pudding contains no actual plums due to the pre-Victorian use of the word " plums" as a term for raisins. [3] The pudding has been heavily mythologized, including the erroneous idea that it is traditionally composed of thirteen ingredients, symbolizing Jesus and the Twelve Apostles, [4] [5] or that it was invented by George I of Great Britain. [6][ failed verification] Early recipes include little more than suet, dried fruit, breadcrumbs, flour, eggs and spice, along with liquid which may be milk or fortified wine. Later recipes became more elaborate. 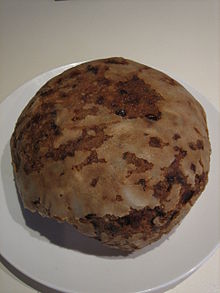 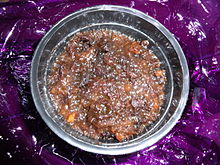 Many households have their own recipes for Christmas pudding, some handed down through families for generations. Essentially the recipe brings together what traditionally were expensive or luxurious ingredients — notably the sweet spices that are so important in developing its distinctive rich aroma, and usually made with suet. It is very dark in appearance — very nearly black — as a result of the dark sugars and black treacle in most recipes, and its long cooking time. The mixture can be moistened with the juice of citrus fruits, brandy and other alcohol (some recipes call for dark beers such as mild, stout or porter). 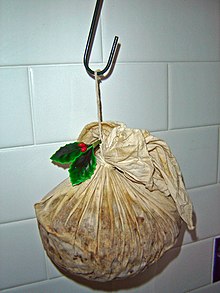 Christmas puddings are often dried out on hooks for weeks prior to serving in order to enhance the flavour. This pudding has been prepared with a traditional cloth rather than a basin.

Prior to the 19th century, the English Christmas pudding was boiled in a pudding cloth, and often represented as round. [1] The new Victorian era fashion involved putting the batter into a basin and then steaming it, followed by unwrapping the pudding, placing it on a platter, and decorating the top with a sprig of holly. [1]

Initial cooking usually involves steaming for many hours. Most pre-twentieth century recipes assume that the pudding will then be served immediately, but in the second half of the twentieth century, it became more usual to reheat puddings on the day of serving, and recipes changed slightly to allow for maturing. [7] To serve, the pudding is reheated by steaming once more, and dressed with warm brandy which is set alight. [8] It can be eaten with hard sauce (usually brandy butter or rum butter), cream, lemon cream, ice cream, custard, or sweetened béchamel, and is sometimes sprinkled with caster sugar. [9]

An example of a Great Depression era recipe for Christmas pudding can instead be made on Christmas Day rather than weeks before as with a traditional plum pudding, although it is still boiled or steamed. Given the scarce resources available to poorer households during the depression, this recipe uses cold tea for flavouring instead of brandy and there are no eggs used in the mixture. [10] This recipe is not as heavy as a traditional plum pudding.

There is a popular myth that plum pudding's association with Christmas goes back to a custom in medieval England that the "pudding should be made on the 25th Sunday after Trinity, that it be prepared with 13 ingredients to represent Christ and the 12 apostles, and that every family member stir it in turn from east to west to honour the Magi and their journey in that direction". [1] [6] However, recipes for plum puddings appear mainly, if not entirely, in the 17th century and later. One of the earliest plum pudding recipes is given by Mary Kettilby in her 1714 book A Collection of above Three Hundred Receipts in Cookery, Physick and Surgery. [11] There is a popular and wholly unsubstantiated myth that in 1714, George I of Great Britain (sometimes known as the Pudding King) [1] requested that plum pudding be served as part of his royal feast in his first Christmas in England. [1]

Christmas pudding's possible ancestors include savoury puddings such as those in Harleian MS 279, croustades, [12] malaches whyte, [13] creme boiled (a kind of stirred custard), and sippets. Various ingredients and methods of these older recipes appear in early plum puddings. An early example of a bag pudding (without fruit) is "fraunche mele" in the Liber Cure Cocorum. [14] Pudding "had the great merit" of not needing to be cooked in an oven, something "most lower class households did not have". [15] Pudding predecessors often contained meat, as well as sweet ingredients, and prior to being steamed in a cloth the ingredients may have been stuffed into the gut or stomach of an animal - like the Scottish haggis or sausages. [16]

As techniques for meat preserving improved in the 18th century, the savoury element of both the mince pie and the plum pottage diminished as the sweet content increased. People began adding dried fruit and sugar. The mince pie kept its name, though the pottage was increasingly referred to as plum pudding. As plum pudding, it became widespread as a feast dish, not necessarily associated with Christmas, and usually served with beef. It makes numerous appearances in 18th century satire as a symbol of Britishness, including the Gilray cartoon, The Plumb-pudding in danger.

It was not until the 1830s that a boiled cake of flour, fruits, suet, sugar and spices, all topped with holly, made a definite appearance, becoming more and more associated with Christmas. The East Sussex cook Eliza Acton was the first to refer to it as "Christmas Pudding" in her bestselling 1845 book Modern Cookery for Private Families. [17]

It was in the late Victorian era that the 'Stir up Sunday' myth began to take hold. The collect for the Sunday before Advent in the Church of England's Book of Common Prayer begins with the words "Stir up, we beseech thee, O Lord, the wills of thy faithful people; that they, plenteously bringing forth the fruit of good works...". This led to the custom of preparing Christmas puddings on that day which became known as Stir-up Sunday, associated with the stirring of the Christmas pudding. [18]

The custom of eating Christmas pudding was carried to many parts of the world by British colonists.[ citation needed] It is a common dish in the Republic of Ireland[ citation needed], Australia, [19] New Zealand[ citation needed], Canada, and South Africa[ citation needed] Throughout the colonial period, the pudding was a symbol of unity throughout the British Empire. In 1927, the Empire Marketing Board (EMB) wrote a letter to the Master of the Royal Household, requesting a copy of the recipe used to make the Christmas pudding for the royal family. The King and Queen granted Leo Amery, the head of the EMB, permission to use the recipe in a publication in the following November. The royal chef, Henry Cédard, provided the recipe. In order to distribute the recipe, the EMB had to overcome two challenges: size and ingredients. First, the original recipe was measured to serve 40 people, including the entire royal family and their guests. The EMB was challenged to rework the recipe to serve only 8 people. Second, the ingredients used to make the pudding had to be changed to reflect the ideals of the Empire. The origins of each ingredient had to be carefully manipulated to represent each of the Empire's many colonies. Brandy from Cyprus and nutmeg from the West Indies, which had been inadvertently forgotten in previous recipes, made special appearances. Unfortunately, there were a number of colonies that produced the same foodstuffs. The final recipe included Australian currants, South African stoned raisins, Canadian apples, Jamaican rum, and English Beer, among other ingredients all sourced from somewhere in the Empire. After finalizing the ingredients, the royal recipe was sent out to national newspapers and to popular women's magazines. Copies were also printed and handed out to the public for free. The recipe was a phenomenal success, as thousands of requests for the recipe flooded the EMB office. [20]

In America, the traditions of the Christmas pudding had already arrived in pre-revolutionary days. [21] A book entitled The Williamsburg Art of Cookery [22] by Helen Bullock was published in the U.S. as early as 1742. Among the ingredients she includes a pound of each of a variety of dried fruits and sugar, plus half a pound each of candied peel (citron, orange and lemon). She also adds one pint of brandy and 12 eggs.

Jane Cunningham Croly published a 19th-century recipe for plum pudding contributed to Jennie June's American Cookery Book by the American poet sisters Alice Cary and Phoebe Cary. It was made as bread pudding, by soaking stale bread in milk then adding suet, candied citron, nutmeg, eggs, raisins and brandy. It was a molded dessert, cooked in boiling water for several hours, and served with a sweet wine sauce. [23]

Wishing and other traditions 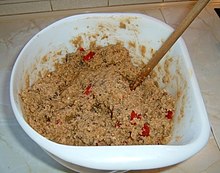 Traditionally, every member of the household stirs the pudding, while making a wish. 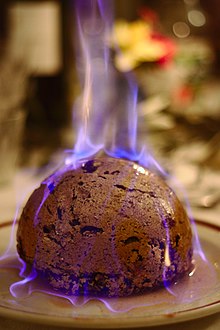 A Christmas pudding being flamed after brandy has been poured over it.

In the late Victorian period a tradition grew up that Christmas puddings should be made on or immediately after the Sunday "next before Advent", i.e. four to five weeks before Christmas. The collect for that Sunday in the Book of Common Prayer of the Church of England, as it was used from the 16th century (and still is in traditional churches), reads:

"Stir up, we beseech thee, O Lord, the wills of thy faithful people; that they, plenteously bringing forth the fruit of good works, may by thee be plenteously rewarded; through Jesus Christ our Lord. Amen."

Initially probably a schoolchild joke, latterly the day became known as " Stir-up Sunday". [24] By the 1920s the custom was established that everyone in the household, or at least every child (and sometimes the servants), gave the mixture a stir and made a wish while doing so. [25]

It was common practice to include small silver coins in the pudding mixture, which could be kept by the person whose serving included them. [1] The usual choice was a silver threepence or a sixpence. The coin was believed to bring wealth in the coming year, and came from an earlier tradition, defunct by the twentieth century, wherein tokens were put in a cake (see Twelfth Cake).

Other tokens are also known to have been included, such as a tiny wishbone (to bring good luck), a silver thimble (for thrift), or an anchor (to symbolise safe harbour). [1]

Once turned out of its basin, decorated with holly, doused in brandy (or occasionally rum), and flamed (or "fired"), the pudding is traditionally brought to the table ceremoniously, and greeted with a round of applause. In 1843, Charles Dickens describes the scene in A Christmas Carol:

"Mrs Cratchit left the room alone – too nervous to bear witnesses – to take the pudding up and bring it in... Hallo! A great deal of steam! The pudding was out of the copper which smells like a washing-day. That was the cloth. A smell like an eating-house and a pastrycook's next door to each other, with a laundress's next door to that. That was the pudding. In half a minute Mrs Cratchit entered – flushed, but smiling proudly – with the pudding, like a speckled cannon-ball, so hard and firm, blazing in half of half-a-quarter of ignited brandy, and bedight with Christmas holly stuck into the top." [26]