From Wikipedia
This is the latest accepted revision, reviewed on 28 January 2021.
https://en.wikipedia.org/wiki/Chestnut_(color)
For other uses, see Chestnut (disambiguation).

Chestnuts can be found on the ground around chestnut trees.

Chestnut or castaneous [2] is a colour, a medium reddish shade of brown (displayed right), and is named after the nut of the chestnut tree. An alternate name for the colour is badious. [3]

Indian red is a similar but separate and distinct colour from chestnut.[ citation needed]

The name chestnut derives from the color of the nut of the chestnut tree. The first recorded use of chestnut as a color term in English was in 1555. [4] The color maroon is also named after the chestnut (via French marron).

Deep chestnut is the color called chestnut in Crayola crayons. This colour was also produced in a special limited edition in which it was called Vermont maple syrup.

At the request of educators worried that children (mistakenly) believed the name represented the skin colour of Native Americans, Crayola changed the name of their crayon colour "Indian Red", originally formulated in 1958, to "Chestnut" in 1999. [5] In reality, the colour Indian red has nothing to do with American Indians but is an iron oxide pigment the use of which is popular in India. 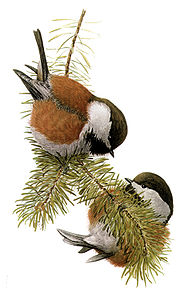