Chester Harding (September 1, 1792 – April 1, 1866) [1] was an American portrait painter known for his paintings of prominent figures in the United States and England.

Harding was born at Conway, Massachusetts on September 1, 1792. He was the fourth of twelve children born to his mother, Olive ( née Smith) Harding, and father, Abell Harding. [2] He was brought up in the wilderness of New York state, he was a lad of robust physique, standing over 6 feet 3 inches. His family removed to Caledonia, New York, when he was fourteen years old, and he was early thrown upon his own resources for support, his initial trade being that of a turner. [3] 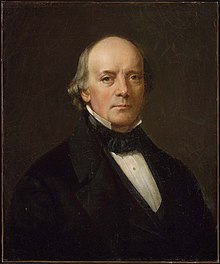 In the War of 1812, he marched as a drummer with the militia to the St Lawrence. [1] He became subsequently chair-maker, peddler, inn-keeper, and house-painter, painting signs in Pittsburgh, Pennsylvania. He worked at this latter occupation a year, when acquaintance with a traveling portrait painter led him to attempt that art. [1] Having succeeded in producing a crude portrait of his wife, he devoted himself enthusiastically to the profession. [4] 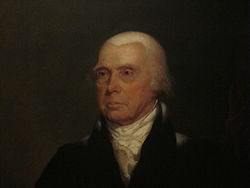 He painted several other portraits at Pittsburgh, and then went to Paris, Kentucky, where he finished 100 portraits in six months at $25 each. He made enough money to take him to the schools at the Pennsylvania Academy of the Fine Arts in Philadelphia. He then established himself in St. Louis, and eventually went on the road as an itinerant portrait painter. In August 1823, he went to England and set up a studio in London, and spent three years in studying and painting. He met with great success, painting royalty and the nobility, and, despite the lack of an early education and social experience, he became a favorite in all circles. [3]

On his return to the United States in 1826, he settled in Boston, initially residing in Beacon Hill, Boston, Massachusetts, in what became known as the Chester Harding House, a National Historic Landmark which now houses the Boston Bar Association. He stayed there until 1830. In 1845, after the death of his wife, he went to England again for a second nine-month visit. [3] After his return, he resided in Springfield, Massachusetts, spending his winters frequently in St. Louis or in some of the southern cities. [5] In 1828, he was elected into the National Academy of Design as an Honorary Academician. [6]

He wrote My Egotistography, which was privately printed. [6]

He painted portraits of many of the prominent men and women of his time. Among the people who sat for him were James Madison, James Monroe, John Quincy Adams, John Marshall, Nicholas Brown, Jr., Dudley Leavitt Pickman, Charles Carroll, William Wirt, Henry Clay, John C. Calhoun, Washington Allston, Stephen Van Rensselaer, [7] Samuel Rogers, Sir Archibald Allison, and the Dukes of Norfolk, Hamilton, and Sussex. Harding is the only known painter who painted Daniel Boone from life. [8] His last work was a portrait of Gen. William T. Sherman. [1] His portrait of Daniel Webster went to the Bar Association of New York, and that of John Randolph to the Corcoran Gallery at Washington, D.C. [9] 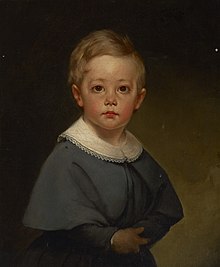 On February 14, 1815, Harding was married to Caroline Matilda Woodruff (1795–1845) near Caledonia in Livingston County, New York. [2] Caroline was the daughter of James Woodruff. Together, they were the parents of nine children, including four sons, two each who fought on opposing sides in the Civil War: