Reactor No. 4 was the site of the Chernobyl disaster in 1986, and the power plant is now within a large restricted area known as the Chernobyl Exclusion Zone. Both the zone and the former power plant are administered by the State Agency of Ukraine on Exclusion Zone Management. The three other reactors remained operational after the accident but were eventually shut down by 2000, although the plant remains in the process of decommissioning as of 2021. Nuclear waste clean-up is scheduled for completion in 2065. [1]

Aerial view of Chernobyl, with the cooling pond visible in background

The Chernobyl Nuclear Power Plant consisted of four RBMK-1000 reactors, each capable of producing 1,000  megawatts (MW) of electric power (3,200 MW of thermal power), and the four together produced about 10% of Ukraine's electricity at the time of the disaster. [2] Construction of the plant and the nearby city of Pripyat to house workers and their families began in 1970, with reactor No. 1 commissioned in 1977. It was the third Soviet RBMK nuclear power plant, after the Leningrad Nuclear Power Plant and the Kursk Nuclear Power Plant, and the first plant on Ukrainian soil. [3]

The completion of the first reactor in 1977 was followed by reactor No. 2 in 1978, No. 3 in 1981, and No. 4 in 1983. Two more blocks, numbered five and six, of more or less the same reactor design, were planned at a site roughly a kilometer from the contiguous buildings of the four older blocks. Reactor No. 5 was around 70% complete at the time of block 4's explosion and was scheduled to come online approximately six months later, on November 7, 1986. In the aftermath of the disaster, the construction on No. 5 and No. 6 were suspended, and eventually canceled in April 1989, just days before the third anniversary of the 1986 explosion. [4] Six other reactors were planned on the other side of the river. All 12 reactors would be planned to be running in 2010.[ citation needed]

Reactors No. 3 and 4 were second generation units, whereas No. 1 and 2 were first-generation units, like those in operation at the Kursk power plant. Second-generation RBMK designs were fitted with a more secure containment structure visible in photos of the facility. [5] 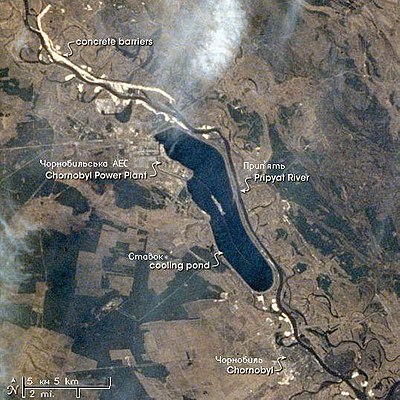 The 330 kV line was normally not used, and served as an external power supply, connected to a station's transformer – meaning to the power plant's electrical systems. The plant was powered by its own generators, or at any event got power from the 750 kV national grid through the main grid backup feed in transformer, or from the 330 kV level feed in grid transformer 2, or from the other power plant blocks via two reserve busbars. In case of total external power loss, the essential systems could be powered by diesel generators. Each unit's transformer is therefore connected to two 6 kV main power line switchboards, A and B (e.g., 7A, 7B, 8A, 8B for generators 7 and 8), powering principal essential systems and connected to even another transformers at voltage 4 kV which is backed up twice (4 kV reserve busbar). [6]

The 7A, 7B, and 8B boards are also connected to the three essential power lines (for the coolant pumps), each also having its own diesel generator. In case of a coolant circuit failure with simultaneous loss of external power, the essential power can be supplied by the spinning down turbogenerators for about 45 to 50 seconds, during which time the diesel generators should start up. The generators were started automatically within 15 seconds at loss of off-site power. [6]

Electrical energy was generated by a pair of 500 MW hydrogen-cooled turbo generators. These are located in the 600 metres (1,969 ft)-long machine hall, adjacent to the reactor building. The turbines—the venerable five-cylinder K-500-65/3000—are supplied by the Kharkiv turbine plant; the electrical generators are the TBB-500. The turbine and the generator rotors are mounted on the same shaft; the combined weight of the rotors is almost 200 tonnes (220 short tons) and their speed is 3,000  revolutions per minute. [7][ failed verification]

The turbo generator is 39 m (128 ft) long and its total weight is 1,200 t (1,300 short tons). The coolant flow for each turbine is 82,880 t/h. The generator produces 20 kV 50 Hz AC power. The generator's stator is cooled by water while its rotor is cooled by hydrogen. The hydrogen for the generators is manufactured on-site by electrolysis. [7] The design and reliability of the turbines earned them the State Prize of Ukraine for 1979.

The Kharkiv turbine plant later developed a new version of the turbine, K-500-65/3000-2, in an attempt to reduce use of valuable metal. The Chernobyl plant was equipped with both types of turbines; block 4 had the newer ones. The newer turbines, however, turned out to be more sensitive to their operating parameters, and their bearings had frequent problems with vibrations. [8]

Incomplete reactors No. 5 and 6

The construction of two partially completed reactors, No. 5 and 6, was suspended immediately after the accident at reactor No. 4, and was eventually cancelled in 1989. [9] Reactor No. 1 and 3 continued to operate after the disaster. Reactor No. 2 was permanently shut down in 1991 after a fire broke out due to a faulty switch in a turbine. Reactors No. 1 and 3 were eventually closed due to an agreement Ukraine made with the EU in 1995.

Ukraine agreed to close the remaining units in exchange for EU assistance in modernizing the shelter over reactor No. 4 and improving the energy sector of the country, including the completion of two new nuclear reactors, Khmelnitski 2 and Rovno 4. Reactor No. 1 was shut down in 1996 with No. 3 following in 2000. [10]

SKALA monitored and recorded reactor conditions and control board inputs. It was wired to accept 7200 analog signals and 6500 digital signals. [13] The system continuously monitored the plant and displayed this information to operators. Additionally, a program called PRIZMA (Russian: ПРИЗМА, программа измерения мощности аппарата; programma izmereniya moshchnosti apparata, “Device power measurement program” [11]) processed plant conditions and made recommendations to guide plant operators. This program took 5 to 10 minutes to run, and could not directly control the reactor. [14]

On 9 September 1982, a partial core meltdown occurred in reactor No. 1 as a result of a faulty cooling valve remaining closed following maintenance. Once the reactor came online, the uranium in the tank overheated and ruptured. The extent of the damage was comparatively minor and no one was killed during the accident. However, due to the negligence of the operators the accident was not noticed until several hours later resulting in significant release of radiation in the form of fragments of uranium oxide and several other radioactive isotopes escaping with steam from the reactor via the ventilation stack. But the accident was not made public until several years later despite cleanups taking place in and around the power station and Pripyat. The reactor was repaired and put back into operation after eight months. [15]

According to KGB documents, declassified in Ukraine on 26 April 2021, [16] serious incidents occurred in the third and fourth reactors in 1984. According to the same documents, the central government in Moscow knew as soon as 1983 that the powerplant was "one of the most dangerous nuclear powerplants in the USSR". 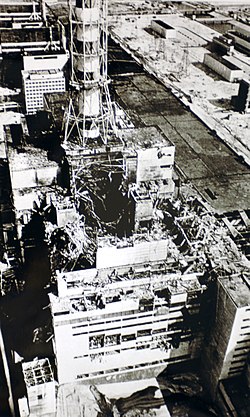 The Chernobyl #4 reactor was catastrophically destroyed on 26 April 1986. This photo was taken of the ruins of Chernobyl Nuclear Power Plant Reactor #4 during the construction of the Sarcophagus in the late summer of 1986.

On 26 April 1986, the Chernobyl disaster occurred at reactor No. 4, caused by a catastrophic power increase resulting in core explosions and open-air fires. This caused large quantities of radioactive materials and airborne isotopes to disperse in the atmosphere and surrounding land. 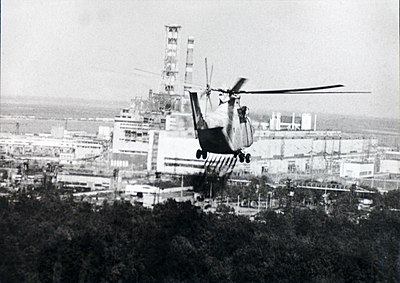 The disaster has been widely regarded as the worst accident in the history of nuclear power. As a result, Reactor No. 4 was completely destroyed, and therefore enclosed in a concrete and lead sarcophagus, followed more recently by a large steel confinement shelter, to prevent further escape of radioactivity. Large areas of Europe were affected by the accident. The radioactive cloud spread as far away as Norway. [17]

The plant utilized one large, open turbine hall for all four reactors without any separating walls. Each reactor had two turbines.

In February 2013, a 600 square metres (6,458 sq ft) portion of the roof and wall adjacent to the covered part of the turbine hall collapsed into the entombed area of the turbine hall. The collapse did not affect any other part of the Object Shelter or the New Safe Confinement. No variances in radiation levels as a result of the incident were detected. [18] The collapsed roof was built after the Chernobyl disaster, and was later repaired. [19]

Reactor No. 2 was permanently shut down shortly after October 1991 when a fire broke out due to a faulty switch in a turbine. [20]

On 11 October 1991, a fire broke out in the turbine hall of reactor No. 2. [21] The fire began in reactor No. 2's fourth turbine, while the turbine was being idled for repairs. A faulty switch caused a surge of current to the generator, igniting insulating material on some electrical wiring. [22] This subsequently led to hydrogen, used as a coolant in the synchronous generator, being leaked into the turbine hall "which apparently created the conditions for fire to start in the roof and for one of the trusses supporting the roof to collapse." [23] The adjacent reactor hall and reactor were unaffected, but due to the political climate it was decided to shut down this reactor permanently after this incident.

The 2017 Petya cyberattack affected the radiation monitoring system and took down the power plant's official website which hosts information about the incident and the area. [24]

After the explosion at reactor No. 4, the remaining three reactors at the power plant continued to operate, as the Soviet Union could not afford to shut the plant down. [25] The schedule for plant decommissioning is intimately wrapped with the dismantling of reactor No. 4 and the decontamination of its environs. The Chernobyl New Safe Confinement will have equipment which will make decommissioning relatively incidental to, yet an integral part of, the cleanup of the exploded reactor.[ citation needed] The majority of the external gamma radiation emissions at the site are from the isotope caesium-137, which has a half-life of 30.17 years. As of 2016 [update], the radiation exposure from that radionuclide has declined by half since the 1986 accident.

In October 1991, reactor No. 2 caught fire, and was subsequently shut down. [20] Ukraine's 1991 independence from the Soviet Union generated further discussion on the Chernobyl topic, because the Verkhovna Rada, Ukraine's new parliament, was composed largely of young reformers. Discussions about the future of nuclear energy in Ukraine ultimately moved the government toward a decision to cancel the operation of reactor No. 2.

In 2013, the pump lifting river water into the cooling reservoir adjacent to the facility was powered down, with the thermal sink, expected to slowly evaporate. [31]

Originally announced in June 2003, a new steel containment structure named the New Safe Confinement was built to replace the aging and hastily built sarcophagus that protected reactor No. 4. [32] Though the project's development had been delayed several times, construction officially began in September 2010. [33] The New Safe Confinement was financed by an international fund managed by the European Bank for Reconstruction and Development and was designed and built by the French-led consortium Novarka. [34]

Novarka built a large arch-shaped structure out of steel, 270 meters (886 ft) wide, 100 meters (328 ft) high and 150 meters (492 ft) long to cover the old crumbling concrete dome that was in use at the time. [26] The structure was built in two segments which were joined in August 2015. [35] In November 2016 the completed arch was placed over the existing sarcophagus. [36] This steel casing project was expected to cost $1.4 billion, and was completed in 2017. The casing also meets the definition of a nuclear entombment device. [37]

A separate deal has been made with the American firm Holtec International to build a storage facility within the exclusion zone for nuclear waste produced by Chernobyl. [38] [39] [40]