From Wikipedia
https://en.wikipedia.org/wiki/Chelicerae
The mouthparts of spiders and horseshoe crabs 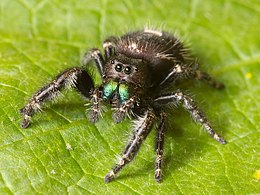 The jumping spider Phidippus audax. The basal parts of the chelicerae are the two iridescent green mouthparts.

The chelicerae ( /kəˈlɪsəriː/) are the mouthparts of the Chelicerata, an arthropod group that includes arachnids, horseshoe crabs, and sea spiders. Commonly referred to as " jaws", chelicerae may be shaped as either articulated fangs, or similarly to pincers. Some chelicerae, such as those found on nearly all spiders, are hollow and contain (or are connected to) venom glands, and are used to inject venom into prey or a perceived threat. For example, in Pisaurina mira, also known as the nursery web spider, the chelicerae is utilized to snatch the prey once it becomes within reach, facilitating the "sit-and-wait ambush predator" behavior. [1] Both pseudoscorpions and harvestmen have structures on their chelicerae that are used for grooming (papillae in pseudoscorpions, cheliceral teeth in Opiliones). [2] 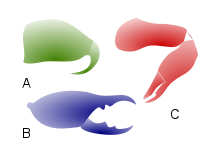 Types of chelicerae: (A) jackknife, (B) scissor, and (C) 3-segmented chelate 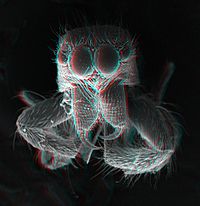 The jackknife chelicera is subchelate (with fixed finger much reduced or absent) and is composed of two segments. This type of chelicera occurs exclusively in the Tetrapulmonata. 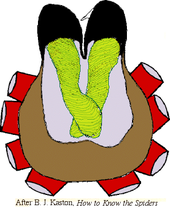 Spider chelicerae. The chelicerae are shown in black, the surface of the cephalothorax in brown, the legs in reddish brown, and the venom glands and surrounding muscle tissue in green. The fang portion of the right chelicera can be seen projecting into the space between the two chelicerae.

The chelicerae consist of a base segment, sometimes called the "paturon", that articulates with the cephalothorax (or prosoma) and a fang portion that articulates with the base segment. [3] Almost all spiders have venom glands and can inject the venom through openings near the tips of their fangs when biting prey. The glands that produce this venom are located in the two segments of the chelicerae, and, in most spiders, extend beyond the chelicerae and into the cephalothorax. [3] The fang, the organic functional equivalent to a hypodermic needle is what penetrates the skin, fur, or exoskeleton of the spider's target—spider mouthparts are primarily intended for envenoming a spider's prey in most species, typically insects and other small arthropods. [3] The basal portion includes all or part of the spider's venom glands, which can be squeezed to control the amount of venom forced out of the glands. [3] Such control permits a spider to administer either a dry bite, a dose appropriate to the nature of the prey or enemy, or a maximal dose. [3] The control is also necessary for actions such as the spitting of venomous silk by members of the family Scytodidae; they depend on that mechanism both in hunting and defence.

When a spider bites, the two parts of the chelicerae come together like a folding knife, and when making a threat display or actually preparing to bite, the spider will open the angle of the fangs with the basal portion of the chelicerae and also open the angle of the basal portion with the cephalothorax. [3] In the tarantulas and other Mygalomorphae, the horizontal separation of the tips of the fangs does not change much, but in the other spiders the tips of the fangs move apart from each other as well as elevating. [3] Even the tips of the fangs of the rather large spider shown above are quite sharp, and the spider's body is well adapted to driving the fangs into flesh. Some spider bites, such as those of the Sydney funnel-web spider, are reported to have penetrated toenails and soft leather shoes. 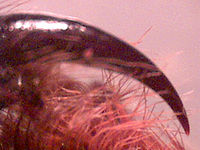 The fang is about 2 mm long. The spider itself is about 25 mm long. 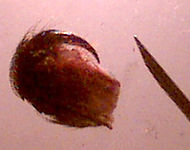 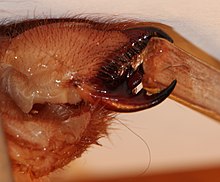 The uncate chelicera is chelate and composed of two segments and occurs in the orders Pseudoscorpiones, Solifugae, Ricinulei, and Araneae [5] (e.g., brown recluse, cellar spider, and crevice weaving spider).