Charles Marion Russell (March 19, 1864 – October 24, 1926), [1] [2] also known as C. M. Russell, Charlie Russell, and "Kid" Russell, was an American artist of the American Old West. He created more than 2,000 paintings of cowboys, Native Americans, and landscapes set in the western United States and in Alberta, Canada, in addition to bronze sculptures. He is known as "the cowboy artist" [3] and was also a storyteller and author. He became an advocate for Native Americans in the west, supporting the bid by landless Chippewa to have a reservation established for them in Montana. In 1916, Congress passed legislation to create the Rocky Boy Reservation.

The C. M. Russell Museum Complex in Great Falls, Montana houses more than 2,000 Russell artworks, personal objects, and artifacts. Other major collections are held at the Montana Historical Society in Helena, Montana, the Buffalo Bill Center of the West in Cody, Wyoming, the Amon Carter Museum of American Art in Fort Worth, Texas, and the Sid Richardson Museum in Fort Worth. His mural Lewis and Clark Meeting the Flathead Indians hangs in the state capitol building in Helena, and his 1918 painting Piegans sold for $5.6 million at a 2005 auction. [4] In 1955, he was inducted into the Hall of Great Westerners of the National Cowboy & Western Heritage Museum. [5]

Art was always a part of Russell's life. Growing up in Missouri, he drew sketches and made clay figures of animals. Russell had an intense interest in the "wild west" and would spend hours reading about it. Russell would watch explorers and fur traders who frequently came through Missouri. He learned to ride horses at Hazel Dell Farm near Jerseyville, Illinois, on a famous Civil War horse named Great Britain. Russell's instructor was Col. William H. Fulkerson, who had married into the Russell family. At the age of sixteen, Russell left school and went to Montana to work on a sheep ranch. [6]

Montana and the West

Russell left the sheep ranch and found work with Jake Hoover, a hunter and trapper who had become a rancher. He owned land in the Judith Basin. Russell learned much about the ways of the West from him, and the two men remained lifelong friends. [7] After a brief visit in 1882 to his family in Missouri, Russell returned to Montana, and lived and worked there for the remainder of his life.

He worked as a cowboy for a number of outfits, and documented the harsh winter of 1886–1887 in a number of watercolors. [7] Russell was working on the O-H Ranch in the Judith Basin of Central Montana at the time. The ranch foreman received a letter from the owner, asking how the cattle herd had weathered the winter. In reply, the foreman sent a postcard-sized watercolor that Russell had painted of a gaunt steer being watched by wolves under a gray winter sky. The ranch owner showed the postcard to friends and business acquaintances, and eventually displayed it in a shop window in Helena, Montana. After this, the artist began to receive commissions for new work. Russell's caption on the sketch, Waiting for a Chinook, became the title of the watercolor. Russell later painted a more detailed version of the scene which became one of his best-known works.

Beginning in 1888, Russell spent a period living with the Blood Indians, a branch of the Blackfeet nation. [8] Scholars believe that he gained much of his intimate knowledge of Native American culture during this period. [7] When he returned to the Judith Basin in 1889, he found it filling with settlers. He worked in more open places for a couple of years before settling in the area of Great Falls, Montana, in 1892. There he worked to make a living as a full-time artist. [7]

In 1896, Russell married his wife Nancy. He was 32 and she was 18. [7] In 1897, they moved from the small community of Cascade, Montana to the bustling county seat of Great Falls. Russell spent the majority of the remainder of his life there. He continued with his art, becoming a local celebrity and gaining the acclaim of critics worldwide. As Russell was not skilled in marketing his work, Nancy is generally given credit for making him an internationally known artist. She set up many shows for Russell throughout the United States and in London, creating many followers of Russell.

In 1912 he joined cowboy artist Frank Tenney Johnson on a sketching expedition to the Blackfoot Reservation east of Glacier National Park in Montana. [9]

When The Land Belonged to God, 1914, replica image displayed for many years in the Montana Senate

In 1913, Russell painted Wild Horse Hunters, which depicts riders capturing wild horses, each band of which is dominated by a stallion. He used as much color as an artist could on his mountain landscapes. [10] As an artist, Russell emerged at a time when the Wild West was of intense interest to people who lived in cities, and cattle drives were still being conducted over long distances. He painted images of the Old West that were later adopted by Westerns, which became a movie staple.

Russell was fond of these popular art forms and made many friends among the well-off collectors of his works, including actors and film makers such as William S. Hart, Harry Carey, Will Rogers, and Douglas Fairbanks. Russell also kept up with fellow artists of the West, including painter Edgar Samuel Paxson, painter Edward "Ed" Borein and Will Crawford the illustrator.

On the day of Russell's funeral in 1926, the children in Great Falls were released from school so they could watch the funeral procession. Russell's coffin was displayed in a glass-sided coach, pulled by four black horses. [11]

Russell produced about 4000 works of art, including oil and watercolor paintings, drawings and sculptures in wax, clay, plaster and other materials, some of which were also cast in bronze. [12]

Many Russell paintings and bronze works are displayed in the Amon Carter Museum and the Sid Richardson Museum, both in Fort Worth, Texas, as well as the R.W. Norton Art Gallery in Shreveport, Louisiana along with the other most prominent western artist Frederic Remington. Additional major collections of Russell art can be found at the Montana Historical Society museum in Helena, Montana, the C.M. Russell Museum in Great Falls, Montana and the Rockwell Museum in Corning, New York. 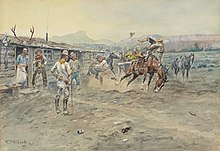 In 1960, Charles M. Russell Elementary School was built in Missoula, Montana. In 1965, a high school was built on the north side of the Missouri River in Great Falls, Montana and named Charles M. Russell High School, in honor of Russell. Ian Tyson's 1987 album, Cowboyography, includes a song titled "The Gift" telling the story of Russell. Michael Nesmith, of Monkees fame, recorded a song titled "Laugh Kills Lonesome" which was inspired by, and describes the contents of, a well-known Russell painting of the same name. Native Blackfeet folk singer Jack Gladstone wrote a song dedicated to Russell titled "When the Land Belonged to God." The song describes Russell's painting of the same name.

Some of Russell's paintings were shown during the credits of the ABC television series How the West Was Won, starring James Arness. James McDowell Sr. of Tulsa, Oklahoma donated 24 volumes of his illustrations to the Western History Collections at the University of Oklahoma in 1997. [16]

Russell was inducted into the inaugural class of the Montana Outdoor Hall of Fame in 2014. [17] He is honored at the Stockmen's Memorial in Cochrane, Alberta, Canada. [18]

The Bull Head Lodge and Studio, located off Going-to-the-Sun Road in Glacier National Park, was Russell's summer home, and is listed on the National Register of Historic Places.

In July 2011, the price of Russell's work soared again. His 1892 oil painting Water for Camp (depicting Native American women dipping pots into a stream) and his 1924 watercolor A Dangerous Sport (in which two cowboys lasso a mountain lion) sold for nearly $1.5 million each. [19]

A collection of 30 pieces of Russell's art were sold for several million dollars at the Coeur d'Alene Art Auction (held in Reno, Nevada) in July 2014, setting new records for many pieces. Russell's Trail of the Iron Horse watercolor (depicting a group of horseback Native Americans contemplating railroad track) sold for $1.9 million, while Dakota Chief (which depicts a young Lakota chieftain on horseback) was auctioned for $1.1 million (almost double the last price it commanded). Even small pencil sketches sold for $25,000. [22]

Robert Taylor hosted and portrayed Russell in a 1967 episode, "A Wrangler's Last Ride" on the syndicated anthology series, Death Valley Days. In this episode, Russell gives up being a cowboy to become a full-time painter. Susan Brown was cast as Nancy Cooper, whom Russell married. [23]

There is a reference to a painting by Russell in the Season 3 episode "Explosion! Part 2" of The Big Valley when Jarrod Barkley uncovers a painting titled Jerked Down. The painting wasn't painted until 1907 while the television series supposedly takes place in the late 1800s Stockton, California region. The episode originally aired November 27, 1967.

In the 1985 movie Remo Williams, Wilford Brimley's character Harold Smith quotes Russell: "Guard, protect, and cherish your land, for there is no afterlife for a place that started out as Heaven. Charles M. Russell, Montana, 1926"

Fess Parker portrayed Charlie Russell in an unaired Pilot TV show titled “Russell”. It can be seen on Bob Terry’s anthology of The Forsaken Westerns. Russell’s “Innocent Allies” is featured. In the pilot Charlie is working as a ranch hand and wrangler when he witnesses a stage coach holdup. He befriends a woman passenger, played by Beverly Garland, who has just purchased a local saloon. It is not clear when this pilot was made but it was likely before Parker’s Daniel Boone and after his Davey Crocket series. At the end of the show we are shown several of Russell’s greatest works. 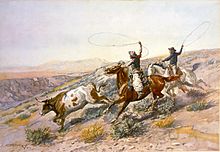 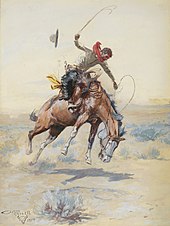 Russell's works comprised a wide variety of topics, including major historical events and everyday life in the west. His work was noted for the frequency with which he portrayed well-known events from the point of view of Native American people instead of the non-Native viewpoint. He was noted for a keen eye on the social undercurrents of society and the meticulous authenticity with which he portrayed the clothing and equipment of both cowboys and Native people.

Historians studying women's roles in the West have critiqued Russell's portrayal of women. They note the contrasting levels of sensuality in his depictions of white and native women, as he seemed to transfer sexuality from white to Native women, so as to conform to the moral standards and perceptions of women in his time. Most of Russell's portrayals of white women are shown as "pure" and non-sexual, other than those paintings specifically depicting prostitutes. In contrast, his series of five Keeoma paintings and related images show a sensual native woman. They are documented by the statement that Keeoma was a real woman whom Russell had loved. Photographs exist that show the body model for these images was Russell's wife, Nancy. Critics say that by serving as a model, she could express her sexuality in a way generally not allowed "decent" white women of the time. [24]

Timothy Egan, in his 1998 book Lasso the Wind, quotes Russell as saying, "In my book a pioneer is a man who turned all the grass upside down, strung bob-wire over the dust that was left, poisoned the water, cut down the trees, killed the Indian who owned the land and called it progress." [25]