From Wikipedia
https://en.wikipedia.org/wiki/Cetus
Constellation straddling the celestial equator
This article is about the constellation. For other uses, see Cetus (disambiguation).

Cetus ( /ˈsiːtəs/) is a constellation, sometimes called 'the whale' in English. The Cetus was a sea monster in Greek mythology which both Perseus and Heracles needed to slay. Cetus is in the region of the sky that contains other water-related constellations: Aquarius, Pisces and Eridanus.

Cetus annotated with lines (a "stick figure") from a latitude further north (north of its declination), above a horizon, in conditions ideal for observation.

Cetus is not among the 12 true zodiac constellations in the J2000 epoch, nor classical 12-part zodiac. The ecliptic passes less than 0.25° from one of its corners. Thus the moon and planets will enter Cetus (occulting any stars as a foreground object) in 50% of their successive orbits briefly and the southern part of the sun appears in Cetus for about one day each year. Many asteroids in belts have longer phases occulting the north-western part of Cetus, that bulk with a slightly greater inclination to the ecliptic than the moon and planets.

As seen from Mars, the ecliptic (apparent plane of the sun and also the average plane of the planets which is almost the same) passes into it.

Mira ("wonderful", named by Bayer: Omicron Ceti, a star of the neck of the asterism) was the first variable star to be discovered and the prototype of its class, Mira variables. Over a period of 332 days, it reaches a maximum apparent magnitude of 3 - visible to the naked eye - and dips to a minimum magnitude of 10, invisible to the unaided eye. Its seeming appearance and disappearance gave it its name. Mira pulsates with a minimum size of 400 solar diameters and a maximum size of 500 solar diameters. 420 light-years from Earth, it was discovered by David Fabricius in 1596. [2]

AA Ceti is a triple star system; the brightest member has a magnitude of 6.2. The primary and secondary are separated by 8.4 arcseconds at an angle of 304 degrees. The tertiary is not visible in telescopes. AA Ceti is an eclipsing variable star; the tertiary star passes in front of the primary and causes the system's apparent magnitude to decrease by 0.5 magnitudes. [3] UV Ceti is an unusual binary variable star. 8.7 light-years from Earth, the system consists of two red dwarfs. Both of magnitude 13. One of the stars is a flare star, which are prone to sudden, random outbursts that last several minutes; these increase the pair's apparent brightness significantly - as high as magnitude 7. [2] 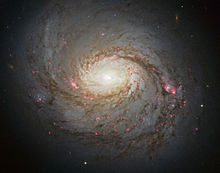 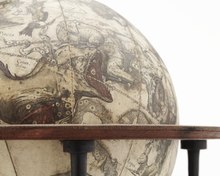 Cetus lies far from the galactic plane, so that many distant galaxies are visible, unobscured by dust from the Milky Way. Of these, the brightest is Messier 77 (NGC 1068), a 9th magnitude spiral galaxy near Delta Ceti. It appears face-on and has a clearly visible nucleus of magnitude 10. About 50 million light-years from Earth, M77 is also a Seyfert galaxy and thus a bright object in the radio spectrum. [2] Recently, the galactic cluster JKCS 041 was confirmed to be the most distant cluster of galaxies yet discovered. [5]

The massive cD galaxy Holmberg 15A is also found in Cetus. As is spiral galaxy NGC 1042 and ultra-diffuse galaxy NGC 1052-DF2.

NGC 246 (Caldwell 56), also called the Cetus Ring, is a planetary nebula with a magnitude of 8.0, 1600 light-years from Earth. Among some amateur astronomers, NGC 246 has garnered the nickname "Pac-Man Nebula" because of the arrangement of its central stars and the surrounding star field. [6]

The Wolf–Lundmark–Melotte (WLM) is a barred irregular galaxy discovered in 1909 by Max Wolf, located on the outer edges of the Local Group. The discovery of the nature of the galaxy was accredited to Knut Lundmark and Philibert Jacques Melotte in 1926. It is in the constellation Cetus. 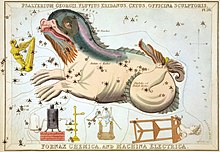 Cetus dominates this card from Urania's Mirror (1825) as if looking up towards the celestial sphere (east is left of frame). Uses the modern custom: celestial maps to be held skywards while facing south. 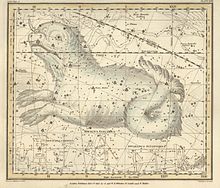 An alike depiction from Celestial Atlas (A. Jamieson) (1822)

Cetus may have originally been associated with a whale, which would have had mythic status amongst Mesopotamian cultures. It is often now called the Whale, though it is most strongly associated with Cetus the sea-monster, who was slain by Perseus as he saved the princess Andromeda from Poseidon's wrath. It is in the middle of "The Sea" recognised by mythologists, a set of water-associated constellations, its other members being Eridanus, Pisces, Piscis Austrinus and Aquarius. [7]

Cetus has been depicted in many ways throughout its history. In the 17th century, Cetus was depicted as a "dragon fish" by Johann Bayer. Both Willem Blaeu and Andreas Cellarius depicted Cetus as a whale-like creature in the same century. However, Cetus has also been variously depicted with animal heads attached to a piscine body. [7]

In Chinese astronomy, the stars of Cetus are found among two areas: the Black Tortoise of the North (北方玄武, Běi Fāng Xuán Wǔ) and the White Tiger of the West (西方白虎, Xī Fāng Bái Hǔ).

The Tukano and Kobeua people of the Amazon used the stars of Cetus to create a jaguar, representing the god of hurricanes and other violent storms. Lambda, Mu, Xi, Nu, Gamma, and Alpha Ceti represented its head; Omicron, Zeta, and Chi Ceti represented its body; Eta Eri, Tau Cet, and Upsilon Cet marked its legs and feet; and Theta, Eta, and Beta Ceti delineated its tail. [7]

In Hawaii, the constellation was called Na Kuhi, and Mira (Omicron Ceti) may have been called Kane. [8]

USS Cetus (AK-77) was a United States Navy Crater class cargo ship named after the constellation. "Cetus" is the title of a ragtime piano composition by Tom Brier on the album Constellations.