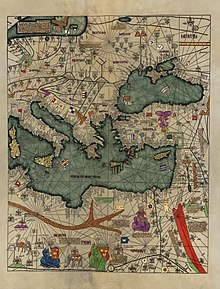 A modern reproduction of the Catalan Atlas depicting the eastern Mediterranean region. 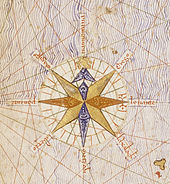 Detail of the Catalan Atlas, the first compass rose depicted on a map.

The Catalan Atlas ( Catalan: Atles català, Eastern Catalan:  [ˈalːəs kətəˈla]) is a mediaeval world map, or mappamundi, created in 1375 that has been described as the most important map of the Middle Ages in the Catalan language, [1] [2] and as "the zenith of medieval map-work". [2]

It was produced by the Majorcan cartographic school, possibly by Cresques Abraham, a Jewish book illuminator who was described by a contemporary as a master of mappae mundi as well as of compasses. [3] It was in the royal library of France (now the Bibliothèque nationale de France) by 1380, in the time of King Charles V. The Catalan Atlas originally consisted of six vellum leaves (each circa 64.5 by 50 cm [25.4 by 19.7 in]) folded vertically, painted in various colours including gold and silver. [4] They were later mounted on the front and back of five wooden panels, with the ends enclosed in a leather binding by Simon Vostre c.1515, restored most recently in 1991. Wear has split each leaf into two. [4]

The first two leaves contain texts in Catalan covering cosmography, astronomy, and astrology. These texts are accompanied by illustrations. The texts and illustration emphasise the Earth's spherical shape and the state of the known world. They also provide information to sailors on tides and how to tell time at night. [5]

The four remaining leaves make up the actual map, with Jerusalem located close to the centre; two depict the Orient; the remaining two show Europe, along with North and West Africa. The map is around 1.3 m2 (14 sq ft) in size. It shows illustrations of many cities—Christian cities with a cross, other cities with a dome—and with each city's political allegiance indicated by a flag. Wavy blue vertical lines are used to symbolise oceans. Place names of important ports are transcribed in red, while others are indicated in black. The illustrations and most of the text are oriented towards the edges of the map, suggesting it was intended to be used by laying it flat and walking around it. [6]

The oriental portion of the Catalan Atlas illustrates numerous religious references as well as a synthesis of medieval mappae mundi and the travel literature of the time, especially Marco Polo's Book of Marvels and Mandeville's Travels and Voyage of Sir John Mandeville. Many Indian and Chinese cities can be identified. [7] The explanatory texts report customs described by Polo and catalogue local economic resources, real or supposed.[ citation needed]

The Western portion is similar to contemporary portolan charts, but contains the first compass rose known to have been used on such a chart. [2]