Rome, the imperial capital at the height of the territorial expansion

Caput Mundi is a Latin phrase used to describe a city as the Capital of the World. Some major cities since the ancient times have been described as the Caput Mundi, the first being Rome and Jerusalem, and then Constantinople (today's Istanbul). Other important cities to have been called as the "Novum Caput Mundi" (New Capital of the world) after the medieval period include London and New York.

Roma Caput Mundi is a Latin phrase taken to mean "Rome capital of the world" and "Roma capitale del mondo" in Italian (literally: "head of the world"; [2] see capital, capitol). It originates out of a classical European understanding of the known world: Europe, North Africa, and Southwest Asia.The influence of Rome in the ancient world began to grow around the 2nd century BC as the Republic expanded across Southern Europe and North Africa. For the next five centuries, Rome would govern much of the known world (of traditional Greco-Roman geography). The cultural influence of the local language of Rome ( Latin) as well as Roman art, architecture, law, religion, and philosophy was significant. The Imperial city of Rome adopted as its nickname Caput Mundi, attributing this to its perception of an enduring power of Ancient Rome and the Roman Catholic Church. Today it still remains one of the most visited cities in the world.

Map of the Holy Land, "the first non-Ptolemaic map of a definite country". [3] Jerusalem is viewed from the west; the octagonal Dome of the Rock stands left of King Solomon's Al-Aqsa Mosque.

Because of its religious, historical and political significance, Jerusalem has been both called Caput Mundi and Umbilicus Mundi. It has been an important territory in the life of Jesus and other Abrahamic prophets. The city still remains an important spiritual and a politically controversial site to the followers of Judaism, Christianity, Islam and Baháʼí Faith. [4] [5] [6] [7] [8]

Today, the status of Jerusalem remains one of the core issues in the Israeli–Palestinian conflict. According to David Ben-Gurion, "No city in the world, not even Athens or Rome, ever played as great a role in the life of a nation for so long a time, as Jerusalem has done in the life of the Jewish people." 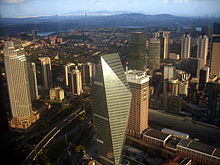 A view of Levent, one of the main business districts in Istanbul and home to the city's tallest buildings

Constantinople, also known as Eastern Rome or the New Rome, was built as the second Caput Mundi by Emperor Constantine in 330 AD, the first Roman Emperor to openly convert to Christianity. [9] By 500 AD, Constantinople had somewhere between 400,000 and 500,000 people, edging out its predecessor, Rome, for world's largest city. It served as an imperial capital for almost 16 centuries. During much of the Middle Ages, Constantinople was the largest city in Europe. [10]

The Byzantine Empire lasted for over a thousand years with the center always at Constantinople, except between 1204 and 1261, when it was centered in the capitals of Nicaea, Trebizond, and Arta.

The city was seen as the "Capital of the World" because of its prime trading position in the center of the medieval world. This privileged position continued after its Islamic conquest, even as the capital of the Ottoman Empire. The Patriarch of Constantinople has been designated Ecumenical Patriarch since the sixth century, and has come to be regarded as the leader of the today 300 million Orthodox Christians.

Today, the city's name is Istanbul, based in Turkey. It is a megacity of 15 million people and the economic and cultural centre of Turkey, but not the capital, which is Ankara. Istanbul is one of the largest cities in the world. 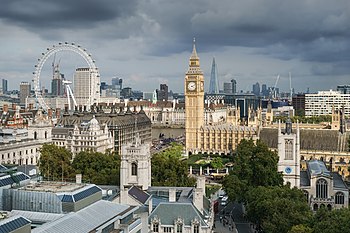 The capital of the British Empire, the largest empire in history, London, was often called the Novum Caput Mundi. It was part of the Roman Empire and has been major settlement since the epoch of Ancient Rome.

London still remains one of the world's leading business, financial, and cultural centres, and its influence in politics, education, technology, entertainment, media, fashion and the arts all contribute to its status as a major global city. Many of the world's largest corporations have their headquarters in London, the city taking a central role as a part of the wider global economy. In addition London in time and on maps is on the Prime Meridian, running directly through Greenwich (also known as the Greenwich Meridian), with its time zone as GMT+0 ( UTC+0). The decision made at the International Meridian Conference was due to the dominance of the British Empire and the influence of British India; for logistical reasons, and because the United Kingdom and London remain a major global influence, this position of the Prime Meridian remains. [11]

London is the most-visited city as measured by international arrivals [12] and has the busiest city airport system as measured by passenger traffic. [13] It is the leading investment destination, [14] [15] [16] [17] hosting more international retailers [18] [19] and ultra high-net-worth individuals [20] [21] than any other city. London's universities form the largest concentration of higher education institutes in Europe, [22] and is home of world-class institutions such as Imperial College London in science, technology, engineering, and mathematics and the London School of Economics in economics, finance, and business. [23] [24] [25]

In 2012, London became the first city to have hosted three modern Summer Olympic Games. [26] The situation of numerous iconic landmarks, such as Big Ben, St Paul's Cathedral, Tower Bridge, the Houses of Parliament, and Buckingham Palace, as well as modern architecture such as the Gherkin, The Shard, the London Eye and the O2 drew approximately 16.7 million international tourists in 2013, establishing London as the most visited city in the world for international tourists. [27] The city is also home of the world's largest library and botanical garden.

London was described as the capital of the "empire on which the sun never sets". It is presently the largest city by foreign born populations and has been ranked as the world's capital city in terms of culture, business, technological readiness and overall economic clout, [28] as well as attracting the most foreign investment of any global city. [29] 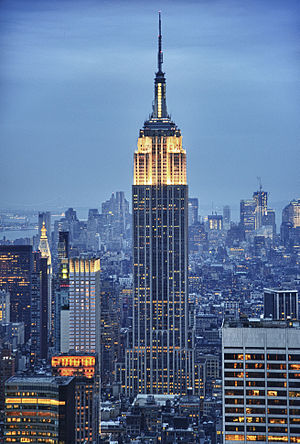 New York, the most populous city in the United States, is sometimes described by the Latin phrase "Novum Caput Mundi" ("New Capital of the World"); or more commonly by the English phrase, Capital of the World, primarily in reference to Manhattan, the core borough often referred to as simply The City by locals . [30] [31] A leading global city, New York exerts a significant impact upon commerce, finance, media, art, fashion, research, technology, education, and entertainment, and the city's fast pace [32] [33] [34] has inspired the term New York minute. [35] Home to the headquarters of the United Nations, [36] New York is an important center for international diplomacy [37] and has been described as the cultural and financial capital of the world, [38] [39] [40] [41] [42] [43] despite not being the modern capital of the United States. As many as 800 languages are spoken in New York, making it the most linguistically diverse city in the world. [44] In 2019, New York was voted the greatest city in the world per a survey of over 30,000 people from 48 cities worldwide, citing the city's cultural diversity. [45]

Numerous national and international private corporations have headquarters in New York. Anchored by Wall Street, in Lower Manhattan, New York has been called the world's principal financial center, [46] as well as most economically powerful city [47] [42] [48] [49] [50] [51] and is home to the New York Stock Exchange, the world's largest stock exchange per total market capitalization of its listed companies. [52] The New York metropolitan region is defined by both the Metropolitan Statistical Area (19.9 million residents in 2013) [53] and the Combined Statistical Area (23.5 million residents in 2013). [54] In 2013, the MSA produced a gross metropolitan product (GMP) of nearly US$1.39 trillion, [55] while in 2012, the CSA [56] generated a GMP of over US$1.55 trillion, both ranking first nationally by a wide margin and behind the GDP of only twelve nations and eleven nations, respectively. [57]

New York has been ranked first among cities across the globe in attracting capital, business, and tourists. [58] [59] Tourism is vital to New York, and many districts and landmarks in New York City have become well known, as the city received a record high 56 million tourists in 2014, [60] generating an all-time high US$61.3 billion in overall economic impact for New York City in 2014. [60] Several sources have ranked New York the most photographed city in the world. [61] [62] [63] Times Square, at the hub of the Broadway theater district, is nicknamed The Crossroads of the World, [64] The Center of the Universe, [65] and the "heart of the world". [66]

The capital of the United States of America and the seat of the U.S. federal government, Washington, D.C. also holds the headquarters of important international organizations such as the World Bank, the International Monetary Fund, and the Organization of American States. The signing of the North Atlantic Treaty took place in Washington; [67] [68] this treaty established NATO, which took part in the Cold War, and by its end, Washington was dubbed by The Washington Post as the capital of the world. [69]

Adolf Hitler, the dictator of the Third Reich, as part of his proposed New Order, planned to make Berlin the "Caput Mundi", directing Albert Speer to formulate the Welthauptstadt Germania—a plan to rebuild Berlin in an Imperial architectural style. The central edifice of Berlin would have been the Volkshalle, from which Hitler would have issued his Imperial decrees as the absolute ruler of Europe.[ citation needed]

In recent times, Milan and Paris were considered Cosmicos Mundi, or fashion capitals of the world. [70]