Cape Coast is a city, fishing port, and the capital of Cape Coast Metropolitan District and Central Region of south Ghana. One of the country's most historic cities, it is the location of Cape Coast Castle, a World Heritage Site, with the Gulf of Guinea situated to its south. According to the 2010 census, Cape Coast had a settlement population of 169,894 people. [1] The language of the people of Cape Coast is Fante.

The older traditional names of the city are Oguaa and Kotokuraba (meaning "River of Crabs" or "Village of Crabs"). [2] The Portuguese navigators João de Santarém and Pedro Escobar who sailed past Oguaa in 1471 designated the place Cabo Corso (meaning "short cape"), from which the name Cape Coast derives. [2] From the 16th century until the country became the independent nation of Ghana in 1957, the city and fishing port changed hands between the British, the Portuguese, the Swedish, the Danish and the Dutch. It is home to 32 festivals. [3]

Cape Coast was founded by the people of Oguaa and the region ruled over by the paramount chief, or Omanhene, is known today as Oguaa Traditional Area. [2] Cape Coast is one of the most historical cities in Ghana. [4] Portuguese colonists built a trading fort in the area. In 1650, the Swedes built a lodge that would later become the better known Cape Coast Castle, which is now a World Heritage Site. Most of the modern town expanded around it. The Dutch took it over in 1650 and expanded it in 1652. It was then captured by the British in 1664.

Trade was an important motivator in the creation of fortresses and settlements on Cape Coast. Traders from various European countries built these trading lodges, forts and castles along the coast of modern Ghana. Unfortunately, the acquisition of gold, slaves, honey, and the many other goods that composed the African leg of the Triangular Trade was increasingly detrimental to the inhabitants of Cape Coast. [5][ page needed] In 1874, the British dominated all European presence along the coast of modern-day Ghana using Cape Coast as their base of operations, Gold Coast. With the establishment of formal colonial administration, they relocated to Accra following opposition to the " window tax" in 1877. Accra became their state. Cape Coast Castle was also where most of the slaves were held before their journey on the Middle Passage.

Oguaa Traditional Area has seven asafo companies – traditional warrior groups, based on lineal descent, whose historical role was defence of the state [6] (the word deriving from sa, meaning "war", and fo, meaning "people") – with a complex social and political organization based on martial principles, [7] and elaborate traditions of visual art. [8] [9] The asafo companies feature largely in Cape Coast's annual Fetu Afahye festival held on the first Saturday of September, [10] and each have historically established uniform colours: Esi Sutherland-Addy identifies these as: No. 1. Bentsir – red; No. 2. Anafo – blue and white; No. 3. Ntsin – green; No. 4. Nkum – yellow; No. 5. Amanful – wine and black; No. 6. Abrofomba (Brofo Nkoa) – white; No. 7. Ankrampa – white and black. [11]

The area is dominated by batholith rock and is generally undulating with steep slopes. There are valleys of various streams between the hills, with Kakum being the largest stream.

The minor streams end in wetlands, the largest of which drains into the Fosu Lagoon at Bakano. In the northern part of the district, however, the landscape is suitable for the cultivation of various crops. [12]

Cape Coast has a tropical savanna climate ( Köppen: As) with two long wet seasons – a heavier one from March to July and a lighter one from September to November – alongside two short dry seasons in January-February and in August.

Cape Coast is a humid area with mean monthly relative humidity varying between 85% and 99%. The sea breeze has a moderating effect on the local climate. [12]

The main market of Cape Coast is called Kotokuraba Market. [14]

Other attractions include a series of Asafo shrines, Cape Coast Centre for National Culture, the Oguaa Fetu Afahye festival (held on the first Saturday of September), and since 1992, the biennial Panafest theatre festival. [15] The city is located 30 km south of Kakum National Park, one of the most diverse and best preserved national parks in West Africa.

It is believed that Michelle Obama, US First Lady, considers Cape Coast as her ancestral home, [16] and on 11 July 2009, she took the rest of the first family to tour Cape Coast Castle as part of her husband's trip to Cape Coast. 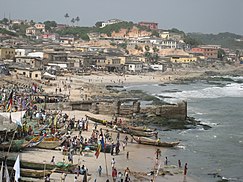 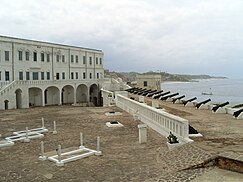 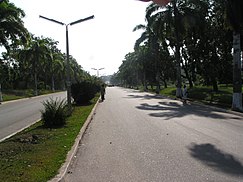 Main street of the University of Cape Coast 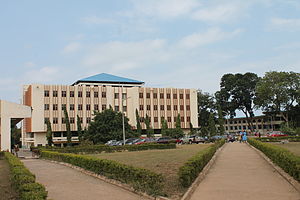 Cape Coast is the seat of the University of Cape Coast (UCC), Ghana's leading university in teaching and research. Cape Vars, as it is popularly called, lies on a hill overlooking the Atlantic Ocean. It also has one of the best Polytechnics in Cape Coast Polytechnic (C-POLY). Other institutions of higher education in the city worthy of note are Mfantsiman Institute of Technology (MIT) and Institute of Development and Technology Management (IDTM). The city also boasts some of Ghana's finest secondary and technical schools:

Notable people born in or associated with Cape Coast include:

The Fante people of Ghana are notable for their way of cooking. They are known for eating rich cuisine, mostly with more fish, meat, or any form of protein than necessary. It is believed that this is because of the number of rivers and lakes situated in the town. The people are known for their expert fishing and fish preservation abilities. Some of the cuisines are fante fante, etew and pepper sauce or okro stew, fante kenkey, which can be eaten with soups, stews or shito.