From Wikipedia
https://en.wikipedia.org/wiki/Cambridgeshire
County of England
This article is about the county. For other uses, see Cambridgeshire (disambiguation).
"Cambs" redirects here. For the municipality of Germany, see Cambs, Germany.
Ceremonial county in England

Cambridgeshire (abbreviated Cambs.) [note 1] is a county in the East of England, bordering Lincolnshire to the north, Norfolk to the north-east, Suffolk to the east, Essex and Hertfordshire to the south, and Bedfordshire and Northamptonshire to the west. The city of Cambridge is the county town. Following the Local Government Act 1972 restructuring, modern Cambridgeshire was formed in 1974 through the amalgamation of two administrative counties: Cambridgeshire and Isle of Ely, comprising the historic county of Cambridgeshire (including the Isle of Ely); and Huntingdon and Peterborough, comprising the historic county of Huntingdonshire and the Soke of Peterborough, historically part of Northamptonshire. Cambridgeshire contains most of the region known as Silicon Fen.

Cambridgeshire is noted as the site of Flag Fen in Fengate, one of the earliest-known Neolithic permanent settlements in the United Kingdom, compared in importance to Balbridie in Aberdeen, Scotland. Must Farm quarry, at Whittlesey has been described as 'Britain's Pompeii due to its relatively good condition, including the 'best-preserved Bronze Age dwellings ever found'. A great quantity of archaeological finds from the Stone Age, the Bronze Age and the Iron Age were made in East Cambridgeshire. Most items were found in Isleham. [5]

The area was settled by the Anglo-Saxons starting in the fifth century. Genetic testing on seven skeletons found in Anglo-Saxon era graves in Hinxton and Oakington found that five were either migrants or descended from migrants from the continent, one was a native Briton, and one had both continental and native ancestry, suggesting intermarriage. [6]

Cambridgeshire was recorded in the Domesday Book as "Grantbridgeshire" (or rather Grentebrigescire) (related to the river Granta). 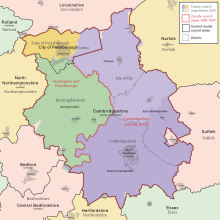 Covering a large part of East Anglia, Cambridgeshire today is the result of several local government unifications. In 1888 when county councils were introduced, separate councils were set up, following the traditional division of Cambridgeshire, for

In 1965, these two administrative counties were merged to form Cambridgeshire and the Isle of Ely. [7] Under the Local Government Act 1972 this merged with the county to the west, Huntingdon and Peterborough, which had been formed in 1965, by the merger of Huntingdonshire with the Soke of Peterborough (the latter previously a part of Northamptonshire with its own county council). The resulting county was called simply Cambridgeshire. [8]

Since 1998, the City of Peterborough has been separately administered as a unitary authority area. It is associated with Cambridgeshire for ceremonial purposes such as Lieutenancy and joint functions such as policing and the fire service. [9]

In 2002, the conservation charity Plantlife unofficially designated Cambridgeshire's county flower as the Pasqueflower. [10]

Due to the county's flat terrain and proximity to the continent, during the Second World War the military built many airfields here for RAF Bomber Command, RAF Fighter Command, and the allied USAAF. In recognition of this collaboration, the Cambridge American Cemetery and Memorial is located in Madingley. It is the only WWII burial ground in England for American servicemen who died during that event.[ citation needed]

Cambridgeshire's county flag was made official on 1 February 2015, after the design was selected as an entry from design competition that ran during 2014. The design features three golden crowns, two on the top, one on the bottom that are separated by two wavy lines in the middle. The crowns are meant to represent East Anglia, and the two lines represent the River Cam and are in the color of the University's colours. [14]

The coat of arms, officially adopted on 1 November 1976, features two Great bustard birds supporting the arms that contain five blue straight and wavy lines to represent the county's rivers, and the tip of a castle tower at the top. The motto at the bottom reads 'Corde uno sapientes simus' in Latin, and translates to 'Let us be wise with one heart'.

Large areas of the county are extremely low-lying and Holme Fen is notable for being the UK's lowest physical point at 2.75 m (9 ft) below sea level. The highest point of the modern administrative county is in the village of Great Chishill at 146 m (480 ft) above sea level. However, this parish was historically a part of Essex, having been moved to Cambridgeshire in boundary changes in 1895. The historic county top is close to the village of Castle Camps where a point on the disused RAF airfield reaches a height of 128 metres (420 ft) above sea level (grid reference TL 63282 41881).

Other prominent hills are Little Trees Hill and Wandlebury Hill (both at 74 m (243 ft)) in the Gog Magog Hills, Rivey Hill above Linton, Rowley's Hill and the Madingley Hills.

Wicken Fen is a 254.5 hectare biological Site of Special Scientific Interest west of Wicken. A large part of it is owned and managed by the National Trust. [15]

Cambridgeshire contains all its green belt around the city of Cambridge, extending to places such as Waterbeach, Lode, Duxford, Little & Great Abington and other communities a few miles away in nearby districts, to afford a protection from the conurbation. It was first drawn up in the 1950s.

This is a chart of trend of regional gross value added of Cambridgeshire at current basic prices published (pp. 240–253) by Office for National Statistics with figures in millions of English Pounds Sterling.

AWG plc is based in Huntingdon. The RAF has several stations in the Huntingdon and St Ives area. RAF Alconbury, three miles north of Huntingdon, is being reorganised after a period of obsolescence following the departure of the USAF, to be the focus of RAF/USAFE intelligence operations, with activities at Upwood and Molesworth being transferred there. Most of Cambridgeshire is agricultural. Close to Cambridge is the so-called Silicon Fen area of high-technology (electronics, computing and biotechnology) companies. ARM Limited is based in Cherry Hinton.

Cambridgeshire has a comprehensive education system with over 240 state schools, not including sixth form colleges. The independent sector includes Wisbech Grammar School, founded in 1379, it is one of the oldest schools in the country. [16]

Cambridgeshire is home to a number of institutes of higher education: 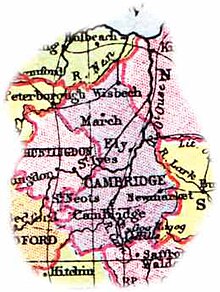 See the List of Cambridgeshire settlements by population page for more detail.

The town of Newmarket is surrounded on three sides by Cambridgeshire, being connected by a narrow strip of land to the rest of Suffolk.

Cambridgeshire has a maritime temperate climate which is broadly similar to the rest of the United Kingdom, though it is drier than the UK average due to its low altitude and easterly location, the prevailing southwesterly winds having already deposited moisture on higher ground further west. Average winter temperatures are cooler than the English average, due to Cambridgeshire's inland location and relative nearness to continental Europe, which results in the moderating maritime influence being less strong. Snowfall is slightly more common than in western areas, due to the relative winter coolness and easterly winds bringing occasional snow from the North Sea. In summer temperatures are average or slightly above, due to less cloud cover. It reaches 25 °C (77 °F) on around ten days each year, and is comparable to parts of Kent and East Anglia.

Various forms of football have been popular in Cambridgeshire since medieval times at least. In 1579 one match played at Chesterton between townspeople and Cambridge University students ended in a violent brawl that led the Vice-Chancellor to issue a decree forbidding them to play "footeball” outside of college grounds. [21] During the nineteenth century, several formulations of the laws of football, known as the Cambridge rules, were created by students at the University. One of these codes, dating from 1863, had a significant influence on the creation of the original laws of the Football Association. [22]

Cambridgeshire is also the birthplace of bandy, [23] now an IOC accepted sport. [24] According to documents from 1813, Bury Fen Bandy Club was undefeated for 100 years. A member of the club, Charles Goodman Tebbutt, wrote down the first official rules in 1882. [23] Tebbutt was instrumental in spreading the sport to many countries. [25] Great Britain Bandy Association is based in Cambridgeshire. [26]

Fen skating is a traditional form of skating in the Fenland. The National Ice Skating Association was set up in Cambridge in 1879, they took the top Fen skaters to the world speedskating championships where James Smart became world champion. [27]

On 6–7 June 2015, the inaugural Tour of Cambridgeshire cycle race took place on closed roads across the county. The event was an official UCI qualification event, and consisted of a Time Trial on the 6th, and a Gran Fondo event on the 7th. The Gran Fondo event was open to the public, and over 6000 riders took part in the 128 km (80 mi) race.[ citation needed]

There is only one racecourse in Cambridgeshire, located at Huntingdon.

Cambridge is home to the Kettle's Yard gallery and the artist-run Aid and Abet project space. Nine miles west of Cambridge next to the village of Bourn is Wysing Arts Centre. [28] Cambridge Open Studios is the regions largest arts organisation with over 500 members. Every year, more than 370 artists open their doors to visitors during four weekends in July. [29]